2350hrs: I woke aware of the continuity of my minds utter confusion. It’s vain attempts to disentangle, organise or even comprehend what the stampeding, macaronic imbroglio of regular, with the odd inopinate thoughts of fears, needs, desires, misunderstanding, jealousies and self-loathing that were once again permeating my poor tortured brain. Blimey, did I type that?

Slowly the mind returned to its regular lackadaisical, gutless, listless beyond-caring mode. Phew! I don’t know what happens during my so-called hours of sleep, but I’m sure that there is little real rest attained. I think I might have been fitted with an Energizer Ultimate Lithium+ ticker battery at the hospital in mistake for one Asda’s own label. Hehehe!

I freed my body with is saggy,  flaccid, gone to seed stomach from the £300 second-hand recliner, and made my way to the wet room. Onto the Porcelain Throne, the evacuations was a big one this morning, but still a bit messy. I managed to read a couple of pages of the Clarkson bio book.

I spotted the odd Evil Ironclad boll weevil biting beetle on the flooring of the wet room. All dead.

I keep a can of the Bug Killer Spray in each room, so I distributed the contents over the floor, coughed a bit, and set off on a reconnoitre, giving each room the once-over.

In the spare room, I could only find a few baby evil Ironclad boll weevil biting beetles. Worryingly, though tiny, they were live ones.

The spray was used again. But my attack was a failure as it blew away a few of the beasts, the rest disappeared in the cracks in the sealing on the new window frames and shelf. One up to the Weevils this time! Haha!

To the kitchen, I only found three weevils in there. One a live one.

They are so very smart and cunning these damned Evil Ironclad boll weevil biting beetles, you know. They keep fooling me into believing they are on the wain, retreating or dead. Then they appear again with reinforcements and counter attack! I have learnt to keep spraying several times a day, of course, the bug killer may kill me before it does for them. Tsk! If I live, the Bank Manager will be after me for the fortune I’m spending on Rentokil, Raid and Sanmex bug killer sprays.

After I had stopped coughing, I went back to the wet room for a hand-washing session.

Did the Health Checks, and I took the medications. 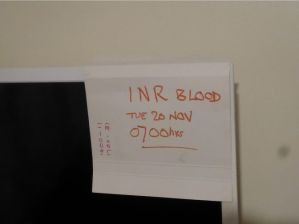 The note I’d left on the TV screen reminded me about the early morning appointment I requested for my blood test appointment, was for 0700hrs!

I wish they could do this regularly, or even everytime. It suits me down to the ground, although if there is snow on the ground, then it would not be suitable. Hehe!

Got the computer going and updated the Excel Warfarin blood test page.

The got the photographs from the camera to use on updating yesterdays Inchcock Today.

Took me a few hours to get done and posted off.

By which time I had to get a move on and start this one off, as the time was rushing by and I need to have everything done for 0500hrs, so I can out for my walk to the surgery at 0600hrs to allow myself time to arrive in time. Not knowing how the ailments will be with me on the hobble has to be taken into consideration. Did you see that? I was making plans and thinking. Amazing! Hehehe!

Off to the wet room to get the ablutions sorted and had an SSWW. 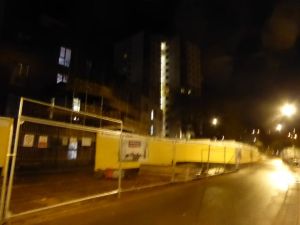 Dropped two black bags down the waste chute on the way out.

The early morning (o6oohrs) was damp, dank and with a fantastic colouration and hue.

I poddled along Chestnut Walk, it was silent, without seeing a soul or animal. I realised I could not hear any birds singing.

I had not got the hearing aids either! Schlemiel!

The scenery as I walked down Winchester Street, was absolutely beautiful.

Not too cold or windy.

A few people were walking up the hill.

The walk up the hill along Mansfield Road and down into Carrington produced some wonderful photos.

Arrived at the Sherrington Park Surgery at 0650hrs for the 0700hrs appointment.

The inner door was still locked, so I got the crossword book out.

0713hrs, the door was opened. I carried on with the crosswords inside.

Pleasingly, Nurse Nichole fetched me and took the blood. We managed a little chinwag and laugh, cause it took a while for the blood to stop flowing today. Thanked her and handed over the nibbles. Left some for the other staff on reception as I departed.

The hobble into Sherwood produce some more, not so colourful as the day dawned, pictures. 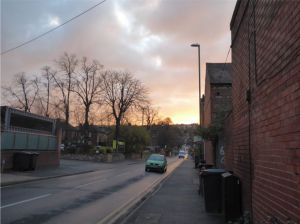 I got some bits from the shop, Croissants, bread, cooked Polish meats, and a few potatoes.

As I turned into Winchester Street Hill, the skyline was unquestionably one of the most stunning I’ve seen in a long time, here or elsewhere, I thought.

Back-Pain Brenda started to play up as I hobbled up the incline.

A little farther up the hill I crossed the road and took another shot of it, zoomed in more and tried a panorama shot, thus losing three-quarters of a car. Hehe!

Back in the flat, I put away the fodder and got on with updating this.

A big crowd of Winwood Heights residents at the bus stop. More chinwags. Mary, Caroline, Angela, etc. Nattered with Mary on the bus to Arnold. Where I dropped off and went to talk to and feed the Mallard Ducks and pigeons in Arnot Hill Park.

Walked into Arnold and called into the Wilko store. Got some cashew nuts, jelly babies and cleaners. When I came out, it was drizzling a bit. Walked to the Chambers cooked meat shop to investigate if they had any of their home-made roast belly pork on display. They did, but it was far too fatty.

The rain stopped as I hobbled along to the Asda (Walmart) superstore. I bought some more cooked chestnuts, they only had four packs left on the shelves, so I took them all. There was a decent use by date on them. Two lemon yoghourts. Potatoe slices. Bits, for the nibble box. Wholemeal flatbreads for the freezer. Fresh tomatoes. Best of all, they had some of the Lemoncello Desserts in stock again. They really are irresistible to me!

Paid at the self-serve checkouts, well, after a bit of a farce or two, I did! I kept doing something wrong, and the red light came on. I’d put the full basket on the wrong side of the machine. So I moved to the next free till, as there was no sign of any assistance arriving. Cocked that one up too! Don’t know what I did wrong, though. Two assistants at the far end stood chinwagging and showing no interest in all the red lights I’d set off… So I moved to a third till! Ah, this one worked!

Rushed as best I could, out into the rain and got to the bus stop shelter. The L9 was due in two minutes, according to the electronic signboard. So I only just made it in time. The L9 arrived fifteen minutes later.

Mary was on the bus, so I sat next to her for a gossiping session all the way back to the flats.

When we arrived in Sherwood, the rain had

stopped again, and Roy from the flats got on, and I took this cunningly clandestine snap of him as he did so. Haha!

Walked with Mary back to Woodthorpe Court. Mary is moving in a couple of days, up to a single flat on the fifteenth top floor. She says its beautiful, and already carpeted as well. Pleased for her I am.

Into the flat, and I had an SSWW (Short Sharp Wee-Wee). Put the fodder purchase away and did the Health Checks, then took the medications.

I put some seasoned sliced potatoes in the oven.

Washed the pots and did the last Health Checks. Had an SSWW.

Got the TV on, I think ten minutes into the programme, I nodded off. Had a dream about me drowning, fell out of a boat on a canal.

Sprang awake with a start! Passed wind from the rear end. This alone encouraged me to get up… realised as I emancipated my corpulent, overweight body from the £300 second-hand recliner, it was only 21:30hrs!

I stayed up. Tsk!