00:30: This may sound odd, well, it will, it sounds strange to me, and I did it… I’m losing the plot here, sorry, I’ll start again. I woke around 0100hrs, aware that I’d been having dreams, Sister Jane and I were still nipperoonies, and I sensed we were singing (possibly drunkenly?) and laughing? Odd enough in itself! But, I nodded off again and had a dream about the same situation, I recall we were at a table near a settee this time. Woke, and drifted off again. Dreamt of the same incident, if that’s the right word. A kitchen came into the dream then. There you are, I told you it was odd, three different dreams (I think) about our Jane and me? Not unless it was one dream and I thought that… Oh, never mind, I’m doing my own head in now, trying to comprehend something from of it. Sorry.

Around 01:00hrs I sprang awake again, but time to consider if I’d been having any more nocturnal thoughts, for the need for a Porcelain Throne visit. I had to haul my cumbersome, gargantuan stomach mass dominated body from the £300 second-hand rickety recliner and off to the wet-room.

Tripping over the slippers en route and clouting my elbow against the edge of the door. (I believe I might have uttered a silent ‘Fancy that’ to myself) Tsk! I got settled on the Throne, and I’m glad to report that things moved a little easier than yesterday. Also, I could only find ten or so EIBWBBBs (Evil ironclad Boll-Weevil black biting beetles), all tiny ones and dead. But I did not allow myself to feel upbeat or over-confident. These little mites have fooled me in the past… often!

I tended to the Health Checks and took the medications.

The readings seemed to be creeping back up over the last few sphygmomanometer sessions.

I made a mug of small China mug brew of English Breakfast tea. I can offer some advice for anyone else making one. If you wish to use a Wilko pad to put it on, do not spill any on the aforementioned pad. It sticks, and when you try to free it, you might splash it on your oversized stomach, and this will make you jump. Klutz!

Made another brew of tea and dunked a few, well, six, well, ten or so or thereabouts Scottish Shortie biscuits.

I put the potatoes in the crock-pot.

Got the computer on with the intention of updating and finishing off yesterday’s post. However, I got myself distracted by working on sorting out the errors I found I’d made on the personal Excel dictionary. Three hours later, I gave up making the so-called improvements. Eizel! And got with the Friday Inchcock Today. Another two hours later, I got this completed and posted off. The day had gone!

Went on TFZer Facebooking, then onto the WordPress Reader Section.

Checked the potatoes, they were done already, and I had not yet got the lamb in the oven. Humph,  Schlub!

At last, I made a start on today’s blog.

Had a look on YouTube while the lamb was cooking. Checked it after 20 minutes, nowhere near done yet. So I gave it another 20 minutes on the timer and returned to YouTubing. 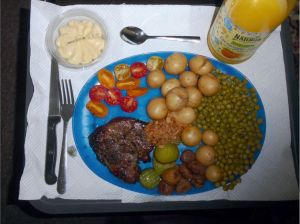 Got nosh served up.

Most of the mini-potatoes had split open, but that allowed the balsamic vinegar to permeate into the flesh and made them even tastier!

The bank manager worryingly priced leg of lamb steak was not as good as I thought it would be, but all the other ingredients were excellent! I ate it slowly, doing my best to masticate it thoroughly, bearing in mind my lack of teeth, that the dentist refuses to pull so I can get false ones made. Purely for financial reasons, I think. He likes drilling and filling, cause he gets more money for these. I can still feel the pain, see his twisted smile, and smell his garlic breath as he rams home the drill. Got carried away there… back to the nosh. I gave this effort an 8.2/10 Flavour Rating. It would have been more if the lamb had been up to expectations. So much for the Asda Walmart range of so-called Extra-Special Foods!

It was late for me now, and the weariness and fatigue dawned.

I got the pots in the bowl to soak. Then to the wet room for an unbelievably extended LLWW (Long Lasting Wee-Wee). It felt so unnatural as if I was passing Niagra Falls! Oh, dearie me!

The last Health Checks were done, and medicationalisation pills and medicines were taken. 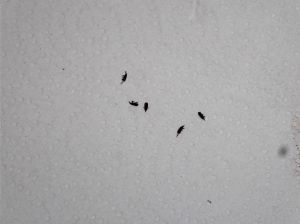 Nipped to the wet room, for another LLWW, Tsk!

Damn it, the dang EIBWBBBs were scattered around the wet room floor. All dead, mind, but bigger than those of late. I fear they might by massing for another counter-attack, perhaps? Hello, one of them must have been playing possum, he or she has just darted off… the scallywag! I sprayed the bug killer in all the rooms again. Not a big job, there’s only four, counting the wet room.

Washed and changed and got down in the £300 rickety second-hand recliner.

Checked the TV schedule, to find that there were several episodes of the Paddington Station being shown. Oh, good, I thought. I watched the start until the first set of advertisements came on, then fell asleep. I woke as the very ending of the third programme and the credits was coming on the screen! Shlimazel or what?

I soon nodded of into the land of Nod again… Ah-well!