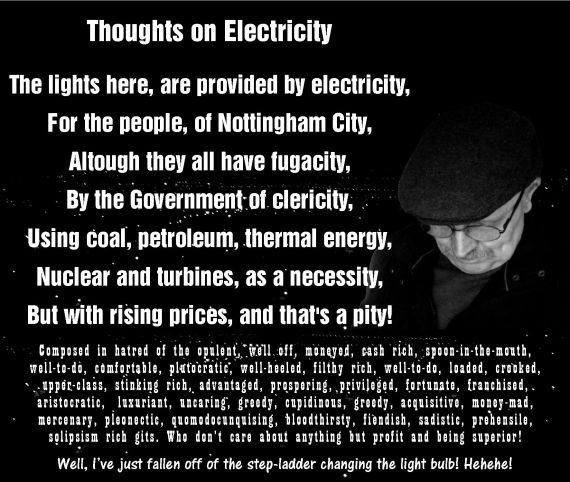 01:25hrs. I woke up, and as out of the £300 second-hand ci1968 recliner, and over to the EGPWWB (Emergency Grey Plastic Wee-wee Bucket) within a couple of minutes.

Unfortunately, leaving a trail of damage behind me; I knocked the remote control off of the arm of the recliner, stubbed my toe on the Ottoman, tipped a bottle of spring water off of the small Ottoman, and dragged the cover off with me! And then, when I finally thought I’d got things flowing, I hadn’t! I needed to wait a further couple of minutes before anything moved! When it did eventually begin to activate, it warranted a new classification-wee-wee being given. An RPDDWW (Reluctant-Painful-Drip-Drip-Wee-Wee) grading. The few drops that did tortuously come out would not have half-filled a small cup! Yet, the bladder had given me all the signs of a mega-resounding (with possible splash-backing) wee-wee being needed? My EQ advised me that I was in for a stressful, anxiety-ridden, fraught day! Tsk!

I tidied up the mini-maelstrom I’d made. Off to the kitchen to do the Health Checks. Sys 167, Dia 77, Pulse 76 and temperature a 35.3° readings returned. Got the kettle on and the summoning to the Porcelain Throne arrived. Off to the wet room, and for once, an infrequent, easy, unmessy non-bleeding evacuation was almost enjoyed. Hehe! Back to the kitchen and made a brew of tea.

To the computer and started to update the Tuesday Diary… And guess what?

I was very dispirited now, downhearted and had a hatred brewing up for Mr Fries. Which only served to make me more agitated, as feelings of hostility and resentment to others are unnatural to me, and then the guilt joined in with the already mixed emotions I was going through.

I decided that a philargyrist and quomodocunquizing personage like money-mad Mr Fries, with his usufruct instincts, is not going to make me lower my standards and become embittered. Besides, apart from anything else, just look at the man above – if he isn’t involved in a Mafia of some kind, then I’m a good looking, fit, healthy, young man, fighting off the attention of the ladies!

I fiddled and faffled about, trying the usual things to get the inept, overpriced, stuttery, incapable, impotent, unfit-for-purpose Liberty-Global Virgin Media Internet service back up and working. Tried the reset button – Nope! Turned off the power and back on again, Nope! Switched all off and unplugged everything then went to make another brew. Returned, everything back in and on – the lights flickered weakly on the modem (I think that’s what they were called, the Virgin box?) – Nope. Painfully I utilised the EGPWWB (Emergency Grey Plastic Wee-wee Bucket). Desperate now, I had a search for the number to ring to see if the service had any problems. (It’s a recorded message of course), but I could not find it!

Then I needed to return to the Porcelain Throne. A grand clear-out followed, and again without any bleeding. Although the piles were now stinging a bit. I had close look a the pin’s knees.

Well, they had changed shape again from yesterday, and Spotty Muldoon sprang to mind as I took this photo? I hope that the Weevils hadn’t laid eggs under the skin and they were coming out after hibernation now? Hehe!

Washed and went back to the computer. To find lights flashing on the Virgin box. Slowly, the service (I use the word in the vaguest sense) returned. The input was slow, but enough for me to get on with updating the Tuesday Diary, at last.

The old EQ (Emotional Content) told me that something was going to happen today that woud be terrifying to me?

These persistent RPDDWWs were taking it out of me.

Eventually, I got the blog updated and sent off to WordPress. Went on the WP reader section, and then the TFZer Facebook site.

Mushrooms and parsnips veg soup. Tasty with some balsamic vinegar and bread.

Medications taken, a wierd tiredness overcame me, an off I nodded.

About 2125hrs or so, I woke up. In a terrible state, the whole flat was swirling and seemed to be leaning to the right and out of the recliner, moments later realising something was not right, and nor being able to move at all without losing control and balance, I pressed the panic alarm wristlet.

(This was typed on Thursday 2nd May, my first day home, nad me not in a very good state for typing, concentrating or brainwork, thanks to Brother-in-law Pete and Jane collecting me from the Nottigham City Council Home and back to the flat, to be interogated by the Social Services chap for the first time in a long while.) But I felt the need to tell the tale, sad as it was.

The alarm lady was talking to me while the Stroke was taking place. Everything that could escaped was doing so at the same time, was doing so! Front, rear, being sick, blood from the throat, in unison! I was trying make me way to the door to unlcok it, all I cpuld hear was the lady telling me to nlock the frnot door or they will have to break it down to get in! I was on all-fours and still faling over repeatedly. Somehow (without a doubt hekoed by the lady on the phone, annoying as hrr voice was at the time, it made me get there to let in the paramedic. A blank spot, until I recal being on the floor in the bathroon apologising for the mess I had left in the front room, and three medics in attendance, another blank spell, then I remember being an ambulance, blues and twos a-ringing out.

Going in a reception area. Seconds later I was gathered after a qucik going over, for an MRSA and Head scans, nad returning to the first bay I was in. A Doctor came and told me I had had a stroke, and was going to be moved to the City Hospital Stroke ward. Along with two other patients I was moved to the Nottingham City Hosital Green ward.

Blanks for a while then I recall being in a ward, but not really with it so as to speak.