04:40hrs. After what must have been six hours kip, I woke, late, but gently this time – with a clear memory of having had a short dream about one of my fears – water, and swimming (That’s two innit? Hehe!).

I wrote down some notes, but there was not much to remember, apart from the changing emotions. It was night time, and people were encouraging me to swim over the river Trent with them. I had heavy clothing on, but none of it mattered at the time, because I really did believe that I had lost my phobia and learnt to swim? I joined a queue of people, waiting for my turn to get into the water… With seconds all the same people, were on a beach, nighttime again, with intentions to swim the channel! This, I was not prepared for, and started to panic and find ways of not going… I recall sitting on the stone wall with my feet dangling in the water… I’m pretty sure this was the time I woke up, needing a wee-wee.

The extraction of my gothopotamus frame and body from the £300, second-hand, c1968, gungy-beige, rickety recliner, was a little more unpleasant than of the last two mornings. Also caused the uttering of a few words that were encouraged by the pain of my stumping the already painful toe against the legs of the computer chair; descriptive words, like ‘Oh, blow it! ‘Fancy that!’ and ‘Oh dear! (Loosely). Hehehe! The wee-wee was of the LHBLWWs (Long Hosepipe-Blasting like Wee-wee) mode. I’ve not had one of these for a while. The EGPWWB (Emergency Grey Plastic Wee-wee bucket) was well-filled, yet I cannot recall using it during the night?

I sat and took a photo of the pins. Not so blotchy today, but a well-fluid-filled pair of limbs, I’ve got.

Physio Charlene is due in today around 08:30hrs, as is the Morrison delivery. I was not keen on doing the exercises, but they need to be done. And, I hope I’ve got this week’s Morrison order, right.

On an impulse, no reason really, unless maybe the sky appealed, I took some photographicalistions, from inside the unwanted, light and view-blocking, impossible to clean, knuckle tearing openings on the windows, balcony. 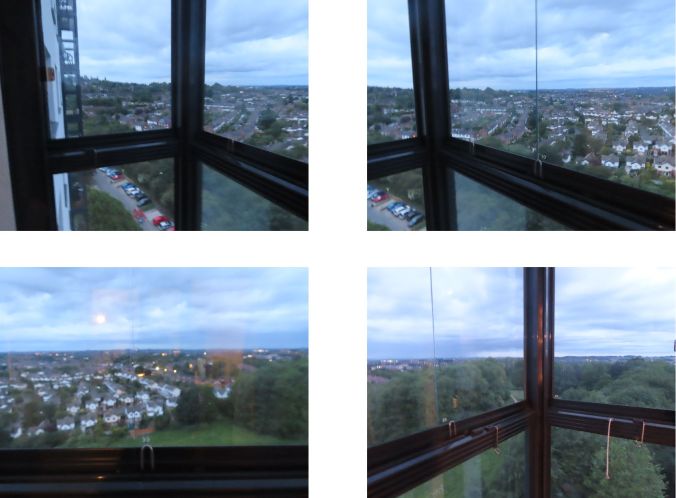 I made a brew and no hand washing to be done, I did it last night, then got on with finishing the Wednesday blog. The effort and irritation varied, as did the electrified finger jumping. Eventually, I got it done. Then, I stopped to get the ablutions tended to.

During which, I stubbed the poorly toe, again, against the WC riser-leg! More unpleasant and curse words were muttered! The stubbed-toe pains became quatridual today. And not a lot easier yet. But nevermind, pain is something I am good at coping with, being accustomed to it. Although this one, tried me further than some of the more serious stuff, has.

As I was leaving the wet room, the intercom rang out, the Morrison chap was early, but this was nae bother.

He took the bags through to the kitchen for me and reminded me about the carriers to return, too. I set about the task of getting the rather larger than usual delivery of food stored away. Ending up with a chocker-block filled fridge and freezer, again.

The baked beans & vegetarian sausage, are on offer at 40p, down from 75p. I tried one last week, and they were a lovely flavour, so I got some more in. Which helped pay for the 25% Hot Balsamic Vinegar (Hot, as to be used in cooking). Now, they’ve gone up to £3 a small bottle.

Unloading, I did realise I had made a faux-pas, yet again this week. I was under the impression I had ordered a single ready-cooked meal, a beef hotpot, of 300gr – But no, that life would be too simple and things go right? I ended up with a £5, mind you, it was reduced on offer, Minced Beef hotpot, of 600gms! Humph! Clot!

My hand on the box and the milk loaf shows how large it was. It wouldn’t even fit in the fridge or freezer! I did feel a fool!

Minutes later, after getting everything sorted, Nurse Charlene arrived to do some physio aerobaticalisationing with me. But after a few of the movement, she realised how painful it was for me with the toe and Arthur Itis playing the knees up too, she put a stop to the exercises. We had a good natter, though. She told me if I could manage it, to get a steady walkout done today. I thanked her, and off she went.

So, a bit of a rush about, but I got things ready and took two bags to the chute on the way out, and two jars for the recycle bin. I also took the gigantic beef hotpot down with me. Then down to catch the bus. I handed the food in at the  Nottingham City Homes, Winwood Heights Flats, and Administration shed for the Generalleutnantess Wardens Temporary HQ, Sarcasm & Insult distribution area, Tenants Socialisation Shed. Rumourmongering Clinic. Telling Inchcock off Zone, Things like crockery and pottery to be stolen from, shed. For the catwalk models and wardens, to share for a meal, as a bit of a treat for them. At least my cock-up came in for a bit of good.

At the bus stop, Mary and Pete shared a chinwag with me. Caught the bus into Arnold, and had I had a bit of a shoppers delight visit.

Firstly into the Wilko store. With the daily hand-washing, I needed some more of the Y-Lang scented Fabric softener and the washing granules. Some liquid soapflakes, as well. Then out into fresh air and walked along to Front Street and the cheapo shop, Savers. They had some economically priced lemon fresh-air spray cans at 99p, so I got a couple, a 1ltre bleach at 99p, and a Neutrodol spray, at 99p. But of course, I wasn’t really thinking, was I?

When I paid for the stuff, the chap who served me had the job of fitting it all in extra little back-bag I’d taken, as the trolleys farting small bag was full of stuff from Wilko that I’d had bought earlier on. Huh! Fool! Eizel!

To make things worse, what a mug that I am, I came out and walked into the Asda store, to get some potatoes for the cheesy-spuds at the weekend, for Josie. Me? Gone into sop and buy one thing? Sadly; No Chance! I came out with, a bag of 6 packs of cheesy curls, the potatoes as needed, tomatoes, curried beans and a DVD! But a great one!

I paid at the self-serve tills.

And what a pickle I got into! I had to take everything out of the shoulder pack, most things from the trolley bag, and repack everything to make room for the Asda stuff!

The chap behind, despite his tut-tutting, and gruff-heavy-breathing, resisted saying anything

I was walking up the hill into the car park on the way to the bus stop, and a chap shot by me and said; “It gets steeper every time you walk up it, dunnit!” And shot off. Obviously, I must have been struggling more than usual, then? Hahaha! A lady passed me by, and said, “Never mind midduck, it’ll all soon be over! Gave me a lovely smile, winked, and walked on? Mmm!

At the top of the pathway, I had to take a shot of this lovely wildflower. It looked so fresh and beautiful to me.

There was a spider,  which I spent ages and many failed tries to picture, but I was so small an I was unable to get a clear shot of it. I was a tad disappointed with myself at this failure!

Through the car park to the bus stop shelter. There were not many free parking spaces available this Friday.

I noticed that many folks were making the best of the sunshine and were scantily dressed. And there was little tubby old me, with more clothes on, than even I  needed. The sweat poured out of my pores as I made my way over the park to the roadway.

I took a photo of the Asda petrol station across the road from the bus stop. I had a ten-minute wait for the bus, and only three cars called for petrol?

Still, they can’t do a runner without paying at this station. It’s card only payments. Hehe!

I caught the bus, and in Sherwood, several residents got on. Which was great, cause it enabled me to have a natter with them on the way up the hill to the flats. About nine of us got off the bus, and the other eight scattered with alacrity and speed? WC requirements, most likely?

The pins, toe and right knee were all giving me some bother on the hobble along Chestnut Way to the block of flats.

But, once in the foyer, May and Gaynor who were sat there, let me have a gossip and laugh with them. Which was super!

They both let me take their photographs too!

Gaynor was looking rather attractive today, mind you, she usually does to me.

What a pose May gave me for her photo!

The bestest natter and fun since I got back to the flat after toe Stroke!

I got upstairs and had another wee-wee, of the SWWW (Short-weak-wee-wee) variety.

Then, a cuppa and got on with updating this post. It took many hours I’m afraid. The fingers kept jumping, and even the leg had a few goes at involuntarily doing the Hokey Cockey! But luckily, up to now, it has been each time I was sat down, so, no Accifauxpas! Phew!

I got the dinner going and took the evening medications.

I gobbled it all up and enjoyed it. A flavour rating of 6/10 granted to it. 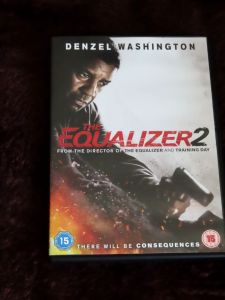 I got the new DVD on to watch… kept falling asleep and rewinding, got fed up with doing it, and turned it off. I put the TV on, fell asleep and kept waking up and missing things.

Gave-up again, and decided to get my head down.

Head down again, and the landline light flashed. By the time I had struggled out of the recliner, it had stopped.

Head back down again.

The brain started to fill with the dreaded, past depravedednesses committed, wrong decisions, mistakes etc. and sleep did not return for hours. I stewed in self-made misery!

When sleep came properly, it was filled with unpleasant dreams.

I ought to publish this bit, titled; “The madman’s route to madness!” Hehehe! I blame the stroke!