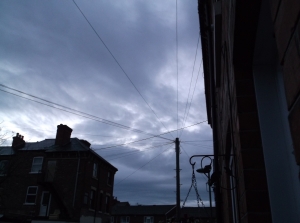 Sprang awake at 0300hrs and lay there fretting and pondering on how I was going to get any sorting done today – GP INR Warfarin level tests at the GP surgery at noon today.

Got some sorting done and rubbish to the bin, and put me ironing board outside with someone elses give-aways near their garage. 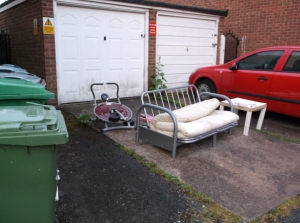 and started to do some much-needed shredding.

While sorting out in the kitchen I came across a net of Marmite cheese that had fallen behind some rubbish – I’d tell you the sell-by date but as Victor Mildrew nearly used to say in his ‘One Foot in the Grave’ shows: “You wouldn’t believe it!”

Pressed on with sorting and shredding again.

Had a wash shave and changed and set off for the GP surgery.

Had me blood test and chin-wag with the Obergruppenführer… I mean Surgery Nurse.

When I left the rain was a-falling.

I’d hoped to get a walk into town in, but caught the bus instead. Thank heavens for me free pensioners bus-pass!

When I arrived in town the Nottingham Citizenry were proving their ability to cross the lights against the red lighted pedestrian signal, yet again. This them it had been on red for a good while, and a bus came around the corner and tapped his horn and one of the illegal crosses of the road actually put his two fingers up to the bus driver!

Visit Nottingham, the Queen of the Midlands the advert says. Hehe!

I had a good long walk around Nottingham taking photographs of certain areas so I could make a post “Nottingham Then and Now” with photographs from the past and today of the same things later.

Good job I didn’t walk to town, because by the time I’d finished trekking all over the City me feet and knees were killing me.

I called in the Nottingham Transport shop to ask what number bus does the route between Nottingham and Woodthorpe Park where the new flat is situated, and where it goes from in town.

After the lady consulted a map and the other Maidenoberführerin… I mean assistants, she suggested I go to Broad Marsh (Which I trudged through earlier on me photo-hunt) and ask there.

Peeved a little, I called in the Nottingham information Centre under the Council House and asked them – within 5 minutes they had given me the location, the number and a map.

I staggered (Well the knees were really bad, I knew summat was in the wind weather-wise) up to the bus stop and caught the bus back to the hovel.

When I got off the bus the flipping wind was howling and folk were struggling to walk against it, and it went really dark as the rain started to trickle down a bit with it.

Called in the Co-op and got some of their bread-thins to have with me later re-planned nosh tonight.

I was going to have the last of me BBQ Chicken with some mashed spuds – but when I got back to the flea-pit, put the kettle on, got the chicken out of the fridge – it was passed it’s sell-by date – I know that feeling Haha!

So it’ll be Sliced potatoes in onion sauce and sausages from the freezer later – I added some black-bean cooking sauce?

Don’t know where the desserts came from…

I wasn’t up to doing any more sorting so updated this diary… and ate two mini-swiss rolls.

Ate me nosh then did some Facebooking.

Despite me feeling tires I had a heck of job getting to sleep – Tsk!

The shoulder wound was really stinging this morning. Might have overdone the sorting yesterday, took an extra painkiller with me morning cuppa and medications.

Couldn’t find the camera so I could finish yesterdays diary with the photo I took of me nosh.

Searched all over – fearing I’d somehow threw it out with the unwanted rubbish. Looked in the bins stretched to get down and started the cancer wound off stinging again (Tsk!), not there.

Looked in me black bags, not there.

An hour later I found it where I first looked for it! Fool! I’d put it back in its karki wallet and was looking for the black camera in me search!

Hey-ho. Got the diary finished and did some Facebooking.

Did some sorting – slowly, the shoulder still hurting badly for some reason since the nurse changed the dressing?

I went back on the laptop and searched City Homes eventually finding confirmation of my being accepted for the flat at Woodthorpe Court.

Set to sorting, bit of shredding and then felt suddenly had a nasty dizzy-spell, felt drained beyond belief.

Just had to get me head down.