03:40hrs: I stirred into imitation life. The body, homologous, as is the norm, but the mind was in a sequacious mode, uninterested in facing or tackling any problems, faults or challenges. Not equal to the task of working out, understanding or wanting to allow me to use it. Disinterested, as if it was seeking only rest and peace and had taken enough of my fretting and worrying. And yet, it appeared to be wallowing in a pacific, amicable and indifferent mood too?

No grey-cells were running off wherever they liked, on any subject they want to, this morning. This left me more confused than when the brain does its usual panicking, fearing and self-recrimination routine.

This worrying train of thoughts soon perished, replaced with the sudden need for the Porcelain Throne to be visited, post-haste! I fumbled and struggled out of the geriatric £300 second-hand recliner, spotting signs of nighttime nibblings as I did so (Tsk, again!). 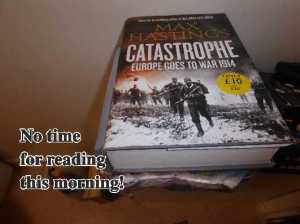 Talk about just in time! I reckon the whole performance took about three seconds. As I stooped to settled on the seat: Splurt, splash and that was that! Apart from having to clean up afterwards. Humph!

No need to kill any time reading my ‘Catastrophy’ book while waiting for some activity to start, like yesterday. Chalk and Cheese? I’ll add a Dia-Limit capsule to the morning medications. No, maybe two! 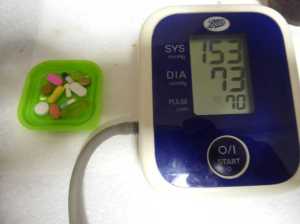 The sphygmomanometer was about the same as the brain was earlier, not inspired to doing anything constructive or productive.

It took me four attempts to get it to operate. (Being the intelligent uneducated young moron I am, I didn’t think about changing the batteries at the time – Sad Innit!)

The results, apart from the weight, all seemed acceptable? 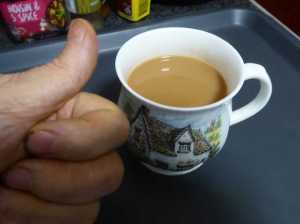 I took the medications with a small mug of tea today.

I noticed some well-dried specks of blood on my fingers and nails. After a lengthy search around by ever increasing in size body, with the help of the shaving mirror, I found a spot on the chest where I must have been scratching at something or other in the night. Not the foggiest idea what the tiny lesion was or how or why it has appeared?

The temperature had gone down a lot, but well within the green zone. The humidity was now below the acceptable green area. I looked up low humidity level on Google and got: ‘Low humidity causes static electricity, dry skin, lips and hair, irritated, scratchy throats and noses, and itching and chapping. This dries out the mucous membrane lining the respiratory tract. As a result, the risk of cold, flu and other infections is substantially increased.‘

On the SensorPush site, it said: The indoor air humidity affects the human organism and in particular the eyes, mucous membranes, and skin. Notably in the range of specific low humidity physiological disturbances occur, which could cause specific pathogenic symptoms primarily in the case of respective predispositions. The focus of this work is put on studies with subjects under controlled clinical trial conditions. Field trials, which are based only on a statistical analysis of subjective survey results, are less significant. Based on a literature review and the medical expertise of the co-authors on the current state of science and research from the medical specialities of ophthalmology, dermatology, and otolaryngology, the physiological effects of low indoor air humidity are gathered, analysed and evaluated. A significant adverse impact on the quality and stability of the tear film of the eye was shown to be a consistent result of independent studies. More differentiated effects and remaining need for research exist regarding the upper and lower respiratory tract and the mucous membranes. A significant finding is that the impairment of mucociliary clearance in low indoor air humidity increases with the age of the subjects. Regarding the effects on the skin, predispositions also play a significant role.

I didn’t go into it much. Because I haven’t got the time to spend so long consulting my dictionaries to find out what the words mean. I don’t think I have that much time left, to be honest. Hahaha!

I got the computer on and started this blog off. Then took a break to make another cuppa, and get the potatoes in the crock-pot on a low setting, Flavoured with onion-salt. Then the mushrooms in the saucepan, seasoned with balsamic vinegar and sea salt, to flavour them, to warm up later. 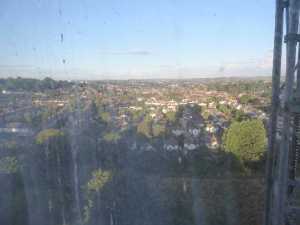 I’d put on a long sleeve t-shirt because it felt rather nippy this morning.

So I had a peep through the unwanted, light-limiting, view-blocking, filth and bird-poo encrusted new balcony windows to see what the day was like.

The sun was forcing its way through at last (0640hrs).

I felt the little scab on the chest itching, and had a scratch on it, and opened it up again. I wonder what it is?

After taking the photographicalisation with the new Sony camera, I realised how much like an exclamation mark the new growth looks, with the new mole or spot growing beneath the itching whatever it is. Haha!

I then went on to the big job of finalising yesterdays diary, with all the pictures to sort and post on it.

It took me until 10:15hrs to get it finished. Then I posted it off.

I got a message come up on the computer screen that meant nothing to me. I don’t think a Russian, Outer Peruvian or Double Dutchman could have understood what it betokened. I grabbed the camera, and as I was snapping the photo, it disappeared? Phutt!

Went for a wee-wee, and only a couple of the tough little ironclad black biting min-beetles were spotted. But they were all too quick for me to catch them.

I got an e-mail from Iceland, telling me there would be many items missing from my order for Tuesday, apologising and offering a voucher for £5 on my next order over £40.

Bit of a letdown, but still, I don’t suppose they would do this without they have genuine problems.

Off to get the ablutions done and get myself dressed for a walk into Sherwood.

Sure enough, when I got down to the ground floor lift lobby, the electronic notice sign indicated it was torrential rain outside. 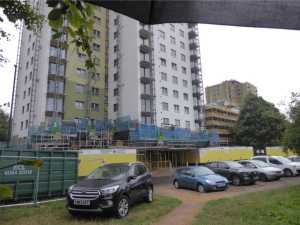 I dropped the bottle in the recycling bin and put the bag near the caretaker’s door.

Umbrella up, I nipped across the road to the bottom of the gravel pathway up into Woodthorpe Grange Park.

By the time I’d got there under the trees, I was already well soaked through with the rain.

It felt a tad eerie walking down the footpath on to Mansfield Road.

The dogs had wisely not taken their owners for a game of ball and a walk in this weather.

No lightning, but a few rumbles of thunder racked the atmosphere for a while.

Then, as approached the top of the hill, on my

way to the Sherwood shops to get some bleach. (Well this might kill the tough little ironclad black biting mini-beetles, maybe), the rain torrented down.

The bag started to fill up, and the rain-soaked all the way down my back; despite the umbrella being used. Tsk!

The shoes squelched with every step taken.

The brolly I was using was roomthily challenged, but it dealt well with the high winds at least.

I decided to check with the bus timetable on the indicator sign, to assess whether I have time to get to the Wilko store to buy the bleach in time to get out in time to hobble back up the hill.

I got over the brow of the hill and down to where near the bus stop is located, on the corner of Hall Street. I thought I had plenty of time. So continued bravely hobbled on in the hateful weather. 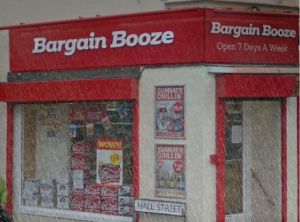 I waded across Hall Street and noticed a tenant of Winwood Heights coming out of the booze shop with several bags of plonk. I think he must have driven down in his car and park up near the Gym. How he carried so much weight, I don’t know. But I made a point of not upsetting the bloke if I meet up with him. Haha!

I trotted to Wilko and got a bottle of bleach.

On my way to pay for it, I noticed (Well, I thought I did), some lemon scented washing pods. Great, I thought, my being so fond of and enamoured by the taste and smell of citrus, and it was on offer at only £2.50 for 50 pods, or was that 30 capsules?

I paid and made my way to the bus stop at the top of the hill. Two lady tenants were joined by another, and the four of us had a cheery chinwagging section, then we caught the bus up to Chestnut Grove.

I had a chinwag with Obergruppenfurhress Deana and Oberscharführeress Julie. As I was about to show them the lemon scented pods… it dawned on me that I’d bought Dishwasher Pods! I’m having a right farshtinkiner time getting things wrong so often lately. Humph!

Feeling a right fool, I left and made my way in the still falling, but lighter now rain back to the flat. Taking care not to repeat the treading on any of the loose slabs in the floor and getting the get any wetter when they go down and spray up the stagnant rainwater over and into my shoes! Got something right for once. Smug Mode Adopted, Hehehe!

Got in the flat and had a look around in the wet to see if any of the sturdy little ironclad black biting mini-beetles room.

Oh, yes, they were out in force. I’m not sure, but they looked to be a little larger than of yesterday?

I resprayed the fly spray, to no effect. Put some bleach down, but the beetles seemed to be unbothered by this. I got down with some kitchen towel on all fours and managed to grab a few of them, but not many, again they were too quick for me.

Getting back up again into a perpendicularish position was as hard a task that I’ve tackled for ages. All I can say is a thank you to the plumber who fitted me a handrail, which I used to aid myself in getting up again.

Did the Health Checks and took the medications. Made a brew and got on with updating this blog.

I rinsed the mushrooms to get rid of the bits into the sink, intending to re-simmer them and found this sturdy little ironclad black biting mini-beetle in the bowl.

I poured some hot water on him, but he was not interested or upset, and suddenly he took off, he moved that quickly, up the inside of the sink and ran off of the counter down towards the floor – never to be seen again despite my searching for him, or her.

I went on to the TFZ Facebook site and posted some photographs and answered comments. 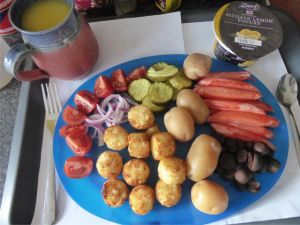 Oh dear, the lemon yoghourt had gone mouldy, yet had a use-by date of 12th August on it?

An Ironclad black biting mini-beetle was on the paperwork! I’ve never seen them in this location before. Usually, it is the kitchen and or wet room that they dwell in. Oh, Heck!

Nibbled some cheese curls as I watched the TV and kept dropping-off to kip for a few minutes, waking and repeating this pattern. Tsk!