0015hrs: As I stirred into mock-life, my mind was bearing habromanical thoughts. Possibly, derivating from a nocturnal dream? For several moments I feard nothing and felt I was the man, and could cope with anything… Of course, this didn’t last long. I soon found myself back in my regular agitated, fault-finding, self-loathing, snivelling unconfident, querulous, insecure, fretful mode. Whimp!

The brain decided that I must first make a sit-rep about the Evil ironclad Boll-Weevil black biting Beetle attack forces situation. This rare decision must have been prompted by my high EQ – for after doing a perambulation and assessment of the Weevils contamination, it was not good news. Well, I suppose it was good news that I found many dead carcases, seeing so many live ones was not good.

Maybe it was the bending or what, I don’t know, but shooting electric-shock-like pains in the lower back have been with me ever since. What a schlemiel!

I wonder if I should just surrender and let them take over? I emptied two more cans of killer spray, one Rentokil and one Raid. I’ll have to get some more again soon.

I felt slightly despondent, at the increase in the numbers of the Boll-Weevils. All the early signs of the habromania evaporated, vanished and banished, to be replaced with a sense of failure and inadequacy. This was not good!

I got on with the Health Checks.

This didn’t do my confidence any good either. The BP still high and the weight; despite my taking two good long hobbles over the last few days, was also up again. The arms and legs have gone all thin and chicken-like, the stomach all bloated! But, I realise with the ailments I cope with, I should be glad to still be here at all, and able to battle the Evil Ironclad Boll-Weevil black biting Beetle illegal immigrants attack forces, daily.

Got on the computer, and finished off the Tuesday Diary and got it posted. (Three-hour job!)

Then, I worked on the TFZer Facebook page and added many photographs to the albums.

Took the morning medications and off to the Porcelain Throne. At this point, you can be aware that I had short-sharp wee-wees throughout my time in the flat, three an hour I think it worked out as. Humph!

The Throne session was again swift, messy and liquified.

Got around to starting this blog, then went on to the WordPress Reader.

I put some of the mini potatoes in the crock-pot on a low light. Planning that when I get back, I can drain them, spray them with sunflower oil and roast them to have as part of my nosh. Best pain plans? We’ll see. Hehe!

Started the ablutions. A stand-up session again, with it being a bit early. All went well, only one tiny cut shaving.

I took the black bags to the waste chute. Then back to the flat and collected chilled lamb hock in mint gravy cook-in-the-bag meal, to take up and offer dear Jenny. It was a little too sweet for my tastes). Took the recycle bag with me, as I intend to go out after visiting Jenny and Frank. Then to go the Nottingham City Homes, Winwood Heights, Stabsgefreiteress Wardens Temporary HQ, WC, Willmott-Dixon workers breakfast and tea-break room, Sarcasm & Insult distribution area, Tenants Socialisationalistic Area, Telling Inchcock off Zone, Crockery and pottery to be stolen from, and residents porta-cabin, to wait for the bus.

Jenny showed me inside and offered to let me take photographs from her kitchen window of the extra-care Unit building progress and Winchester Court. That was nice of her. I’ll take her up on that, bless her. I thanked her and made my way down in the lift and out onto Chestnut Way.

Not so sunny today, but we’ve done well weather-wise, so no complaints from me.

Took a photograph of all three Courts. And off to the waiting hut.

Within minutes the shed had filled up with tenants. Sheila, Lynne, Penny, Roy’s better-half, Paul, Welsh William and a few others.

I went outside so that I could let them know when the Bestwood bound bus L9 bus arrived.

I sat with the delightful wife of Roy. (I wish I could remember names! Tsk!)

I let them know when the bus arrived. Everyone got off in Sherwood, leaving me to have a go at my crossword book on the way to Arnold. I got off and walked hastily to the Fulton Foods store, where I was overcharged for the nibble box things I bought. Humph! Didn’t notice it at the time. I also got some the bags of  6 tiny flavoured pork scratchings, salt & vinegar, BBQ and maple seasoned. I will eat some of the salt and vinegar ones with my meals, the rest can go into the nibble box.

I forgot all about getting some milk, though. Klutz! 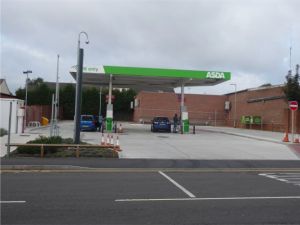 Back up to High Street and waited for the L9 to arrive. I wish I’d remembered the milk!

I noticed that the automatic, Asda Walmart filling station across the road from the bus shelter had three customers.

Never seen it so busy.

The lower-back stabbing pains were getting

The sky clouds suddenly darkened and I thought we might be in for a bit of a sudden storm.

But no! Withing few minutes it had lightened up again as the storm cloud belted on at the high rate of knots to the South?

The bus arrived, and we were soon back at the flats.

I managed a few quick exchanges of words with Cyndy, Val, Bill and a few other residents as they got on the bus I’d just alighted from.

The Willmott Dixon lads were noticeable by their absence this lunchtime.

I took a panorama shot of the whole of the Winwood Heights buildings. The caretaker is walking away using the safe route as you can see. I followed suit on my way back to the apartment, and more crucially the WC in there. Hehe!

I noticed some new generators, I think, judging by the noise emanating from one of them, on the verge. Making less room for residents to park. That’ll cheer some car owner up, I’m sure!

Then took this photograph on the left of the new generator (Far left I assume) and cabins. A sign said Site Security?

Pressed on with updating this post up to here. Two hours.

Sister Jane rang me for a natter. That was nice! I can’t recall her telling me off about anything either, That was super! Hehehe! Oh, yes she did, just the one thing though. Had to cut the gossip short to go for a wee-wee. I didn’t make it in time! Shame! Cleaned up and changed PPs. 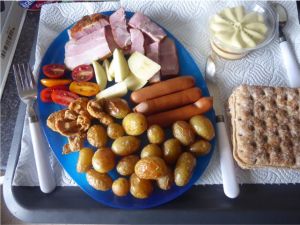 Got the mini-potatoes from the crock-pot and into the tray and sprayed them and got them cooking in the oven.

I didn’t eat it all by a long chalk. The pork and potatoes were fine.

Tired as I felt, it took me ages to nod-off properly tonight.