But I gave it a go further down…

The Day that Genghis Khan Died

03:45hrs: What a nightmare that was that I just had! It followed one earlier, about my younger days, with a relative of long ago, in the flat, telling me “Not to bother, failure, pain, and frustration are all that is on the cards for you, youth!” The later one, was a right mixed bag, a ghost or spirit coming out of the clouds and down into the flat, and taking me away with it, up into the sky-shadows and beyond – where a giant underground cave was being used to keep dead souls contained? Lots of other stuff, but this is all that was clear enough for me to remember. Great, I get some much-needed sleep, and it’s filled with nightmares! Lucky or what? Hahaha!

The task of freeing myself from the £300, second-hand, c1968, grotty beige-coloured, not working, rickety recliner, was once again an easy task. No dizzies, loss of balance, toe-stubbing, tumbling, or knocking anything over! This was promising. As was the lack of any warnings from the EQ! Arthritis in the knees had got much more comfortable, and the bruise from last nights Whoopsiedangleplop, falling out of the recliner, had come out behind the knee, but it wasn’t sufficiently painful to give me any bother.

I utilised the EGPWWB (Emergency Grey Plastic Wee-Wee Bucket) for an IDKWIB (I-don’t-know-why-I-bothered) mode wee-wee. And off to the kitchen, with a sudden uncertain feeling that I may be about to find something I had left on, running or similar. But no, all looked fine.

I took the medications and made a brew. I nipped onto the balcony to take this shot through the finger shredding, rain letting windows that cannot be reached to be cleaned. The blue again view, was lovely.

To the computer to start updating and finishing off the Saturday diary.

The finger-ends began to jump or freeze as a natural reaction when they came into contact with the keyboard buttons. The shoulder jerking started at the same time. This meant I had an extra-long frustrating session in doing the updating.

The need for the Porcelain Throne to be utilised arrived, and the evacuation was nice and clean for a change, not messy this time. I wiped around and did the hands and returned to the computer.

I’d almost finished the updating, and I had to return, this time with the highest speed I dare muster, to the wet room! Before I had got through the door, the PP’s were down, and dressing gown abandoned; onto the Throne, without a single second to spare… Oh, dearie me! The innards rumbled tunefully, and the evacuation went on and on.. and on! Painfully too, which caught me out, as the self-extracted material was almost liquid? I sat there for a while, to recover from the torrent, which proved a wise decision. Because it was followed by an MES (Marathon-Endless-Sprinkling) wee-wee, that may have taken the longest time than ever before! I even grabbed the crossword book, to help kill time, but I could not locate any pen or pencil. (Tsk!) I felt oddly drained, tired and almost jet-lagged, afterwards. (I don’t know why I wrote jet-lagged, I’ve never been on a jet? But it is how I imagine it would have been).

As I cleaned everything up again, the asceticness of my life came to the mind’s fore. Ralph’s words also came back to me from the dream.

I pressed on and completed the Saturday post, sent it off to WordPress, and then went onto the WP Reader section.

I made a start on this blog, as far as here.

Went to make a brew, and took another picture, from the new light & view-blocking kitchen windows, with the impossible to reach panes of glass to be cleaned, not without using the step ladders and a lot of foolish bravery, anyway. I must say, the view was even better than the last photo.

I got the peas podded, and in the one remaining saucepan, I have, to marinate with a little demerara sugar, for Josie’s nosh later.

I also got the oven warming ready to use.

As for the shelling of the peas, I did have a few that shot off in different directions, but no more than about 20 of them. Haha! I managed to find 10 of them afterwards. In various places, but I anticipate coming across more of them later on today. 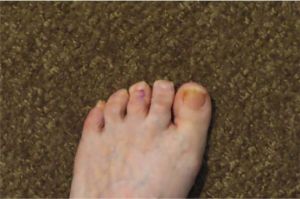 Then off to the wet room, to do the ablutions. The stubbed middle-toe was looking on the mend, so much better now. Of course, as to when the next toe-stubbing will take place, is in the hands and power of Jonah, the Spirit of Whoopsiedangleplops. My Inchcockskian Evil-eyed-habinger, nuncio, and stormy-petrel of bad-luck, accifauxpas, jinx-supplier, and Avant Courier, to decide!

Plenty of dropsies today, the soap, the sponge, the razor (x3), toothbrush, toilet cleaner bottle, mouthwash bottle, the shower head, olive oil tube, Haemorrhoid cream tube, and the last one, the dang chair I was carrying back into the shower after cleaning up! Bit of good luck there, no injuries at all! Smug-Mode-Engaged!

To the kitchen to check on Josie’s potatoes. Took a picture from the kitchen window, showing the shadow of Woodthorpe Court, cast over the view.

I rang Sister Jane, and the phone died a death on the second ringing tone! The gal rang back later. We had a lovely natter. I told her of Intercom guide paperwork was different from the layout of the actual machine

, and some of them did not work anyway. I certainly cannot here the weak jingle when someone rings. I have eight missed calls for last week alone! A lot of residents have had visitors who could not get in! We had, had fitted. I told her I’d sent a photo of on sheet, in which someone looking remarkably like Brother-in-law Pete was on it. I, unfortunately, I had to cut things short, to get

the spuds out of the oven. But, it was a nice, if hard to hear due to the echo on the line.

I got the cheese, salt and butter, vinegar and potatoes well bashed and mashed up in the bowl, then transferred back in the husks, and into the oven to brown them off. I laid out Josie’s plate. Tomatoes, gherkins, tuna chunks, mushrooms, a knob of Marmite cheese, an 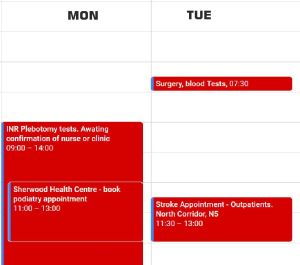 I had a quick look at the appointments online for Monday & Tuesday, in between checking the spuds to see if they had yet browned-off enough.

They had in the third visit, so I got the meal served up and plated, onto the server, and off to deliver it to Josie’s flat, opposite mine. As I promised, spot on 12:00hrs, midday! Puffed upperdness mode adopted!

Josie said it looked too go

I returned to the flat and made myself a cuppa, and took this photograph with the old Lumix that I’d left charging up. It gives an idea of why I say the light & view-blocking, thick-framed, photographers nightmare windows.

I didn’t want to make my meal yet, as I often fall asleep, and Josie returns here washed plates, etc. and wakes me up each week. It’s hard for her to remember my ridiculously early nodding off time. So, on Sundays, I try to stay awake longer. Not that it works often. Tsk! So. I’ll wait until she has returned and hopefully has a natter with me. Another rarity nowadays. Bless her. 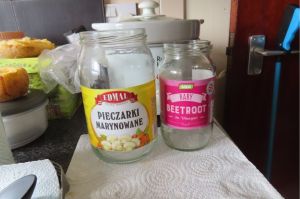 I washed the empty jars and left them in view, so I might just possibly, see them and remember to take them down to the recycling bin in the morning. Or, not!

Now, the audiologist last August confirmed my Asonia, (Deafness to certain pitches of sound) so I may have fallen asleep and imagined what happened next.

I thought I heard the door chime. Went to the door, thinking it might be Josie, but no one was about. Back to the kitchen, and listened to the same sound again. To the door, nobody there. Returned to the scullery. Again, chiming. To the front door, no one about? I called at Josie’s, but no answer. Back to the fodder, and again, the distant-sounding chiming… on my way to the door… I realised it must have been the flaming crap new intercom system. That had not lit up when someone called. (Nothing new about this, dozens of tenants have a problem with, or their intercom does not work at all!) I got the notes supplied on usage, (although the layout of the machine is so different from the examples given in the paperwork and confusing) and sussed out how to check on missed calls. Only 25 of them! Humph!

I had my potatoes prepped at the same time as Josie’s, and got them in the oven to brown-off. A beef slice, beetroot, mushrooms, garden peas, tomatoes, and some Poppit salt & vinegar crisps with the added potatoes when they were done.

I awarded this colourful effort a well-worthy 8/10 Taste-Rating. Got the pots washed, and did the handwashing and hung them to start drying.

After this, the memory gets very foggy. I got settled down in the rickety recliner, and think I started nodding and waking… but anything could have happened as Dizzy Dennis visited me, that bit I can remember! Tsk!

2 thoughts on “Inchcockski. Sunday 18th August 2019: A motley hotchpotch of ups and downs!”