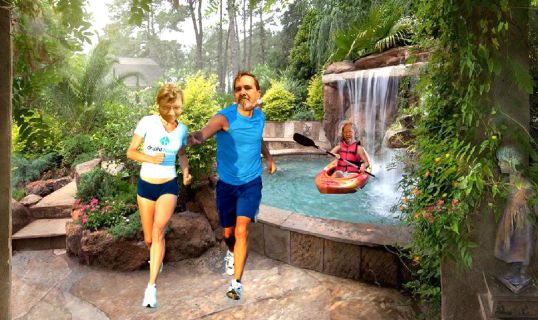 01:45hrs: I woke and laid there in the c1968 recliner for a few minutes. Bit of a dream I think I’d been having, drifted away, then the Thought Storms needed absterging, but they were coming thick and fast for a time. They were finally conticented by the need for a wee-wee arriving, taking my attention to more urgent needs. And need couldn’t have timed it better!

I heaved my astronomically and enormously flabby-bellied body up onto the feet. I caught my balance and started the few paces to the NWWB (Nocturnal-Wee-Wee Bucket). I let out a naughty version of an ‘Ouch!’, as I trod on a piece of the mustard, honey & onion Pretzels. I must have been at the nocturnal nibbling again, Tsk! It didn’t half hurt! Hahaha!

A complete change in the wee-weeing style this time. Of the IRPT (Indefatigably-Relentless-Painful-Trickle) mode. And with having to stand there holding the bucket for so long, Colin Cramps kicked off! And with fidgeting about, the hole in the foot made by the pretzel was leaking blood on the carpet! No doubt about it, I was in a right pickle! Again, I was happy this time that there were no CCTV cameras in the flat!

I somehow or other, possibly a miracle, but I got a plaster on the sole of the foot. It may not stay there very long, mind. Took the morning medications, and went to the kitchen to get the kettle on. The plaster fell off of the foot, but it didn’t matter the bleeding had stopped altogether. (These pieces of broken Pretzels can be deadly, Hehe!) By, they ain’t half-tasty!

Made a brew of Glengettie, took another IRPT wee-wee, the flaming tea was cold by the time it had done sprinkling. Cracked on with the updating of yesterday’s diary. I seemed to get it done reasonably quickly, I hope I haven’t missed owt off or made a mess of it.

I posted it off and got the Health Checks done. The Boots Sphygmomanometer, manufactured by, ZDEAC (Zhongshan Daguan Electrical Appliance Company Ltd) in Guangdong, China, had the SYS as 159, DIA 83 and Pulse 86 bpm. Looks okay. 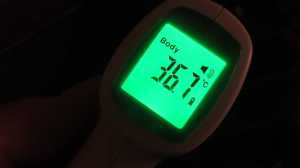 The Chinese (Hong Kong) made by Shenzhen Relee Electronic & Technology Co. Ltd, reliable easy to use and contactless thermometer, gave a reading of 36.7°c, which was well in range, and on the green. At least something is consistent. I may regret saying that next time. Haha!

Got the email link sent off, Pinterested a few photographs, and went on the WordPress reader section. Had another wee-wee, not so bad this time, of the UTD (Unwilling-Trickling-Dribbling) variety, far less painful, too! 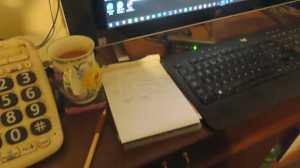 Went on the Facebooking catch-up. Read and replied to the WP comments, took a wee-wee, made a brew off Thompsons Punjana tea, then started this blog going.

Things were going slower in the

productivity stakes now? Why, I’m not sure, because the ailments are all being kind to me now? Still, I pressed on for an hour or two, then decided to take a break and get the potatoes into the crock-pot and seasoned for later on.

I did some more updating, had a wee-wee, passed wind, and decided to get some brekkers, so off to the kitchenette, to see what was lurking in the fridge to tempt me. I took this shot from the thick-framed, light and view-blocking window, of Chestnut Drive. It felt a lot colder out there now?

No signs of snow, though. I cobbled together a snack, made another brew, had a wee-wee, washed my hands, and settled at the computer, food on a tray, and carried on with this blog. (Oh, I am a good lad! Hahaha!) 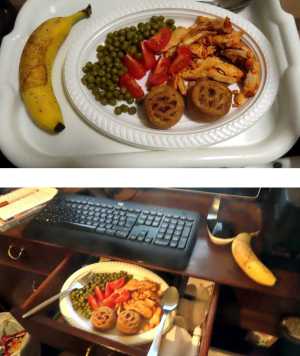 Getting breakfast sorted, and the Porcelain Throne was needed.

Off to the wet room. Another victory for Trotsky Terence, but not messy at all this time! Washed and back to collect the brekkers.

How’s this for luxury then? I pulled out a draw, put the plate in it, and worked on the blogging while nibbling it! Hehehe!

An hour or two later, I washed the pots and got ready to get the ablutions sorted out. Not such a good session this time. (Not complaining, I’ve had two reasonable, nae, excellent ones in a row, so, fair enough!) 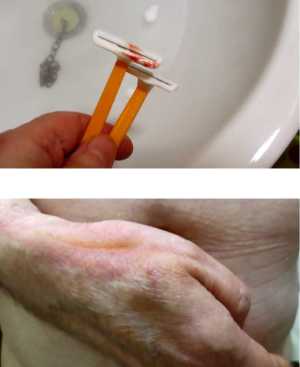 caused me more bother than it has for months. Several cuts, none of them were really bad. On the last cut, I dropped the razor, and it felt awkward to retrieve from where it fell; the mop bucket!

Via the sink, the tray, the wall and finally down into the bucket behind the tray. This caused me to trap my hand pulling the razor back up, and I fell forwards ontop the tray trolley, ending up with an odd and painful bottom thumb

I’d like to take this moment, to thank and curse SSS (Shuddering-Shoulder-Shirley) and Dizzy Dennis) But I dare not, because the language I’d have to use would be too naughty. Credit to their perfect timing, though!

The medicationalisationing was easy enough, well, apart from getting some ointment on the underfoot cut, from the Pretzels – Not a lot of people can say that you know. Hehehe!

I had another wee-wee, then sorted and made up four black bags from the bins, and a box of recyclables and mounted them on the trolley-guide. No easy task! I’m not sure how I managed it, but I got out through the door with the bogey and boxes, without any Accifauxpas, Whoppsiednagleplops or mishaps whatsoever!

Smug-Mode-Class-One-Adopted! I put the black facemask in the trolley bag.

I limped differently, down to the waste chute in the lift lobby. I say different, cause with the Pretzel cut being tender, and Cath Cartilage now playing up, finding the least painful way was not easy, and involved some semi-ballerina like movements in testing them out in turn. Hehehehe!

I was determined not to trap my finger or hand in the chute-room, or drop anything, or hit my head on the cast-iron cover. And I did avoid all these things, and felt a smidge of pride in my efforts being successful! Oh, yes!

But on the way out, I hit my right shoulder on the edge of the doorframe. It was a fair whack, I can still feel it now, four-hours later! Humph!

As I returned to the elevator lobby, I noticed that some work was taking place on the end wall. That or it was some good graffiti. Haha!

Getting a lift down so I could take the recycling bin to the bin was not easy. I felt jinxed! The left cage arrived, someone was in it, I didn’t want to share, so smiled at the lady, and waved her on.

Then I realised I had not put my mask on – no problem I thought, and I went into the carrier to get it out to put on. And realised I had put in a black glove, not the mask! Things were getting back to normal for me, it seemed! Then the right lift went straight by me on its way down? The left one left by me going up, and missed me going down? The right elevator missed me going up… I took the photo above in the reflection of the lift door while waiting…

Aha, it stopped on the way down! I’d almost forgot why I was going down in the first place! Not really! The lobby was sealed off, I’d forgotten that was happening today, Tsk! I went through the caretaker’s entrance out to the bin. The caretakers were out there, so I got a chance to talk to someone, I’d nearly forgot how to do it. Hehehe! 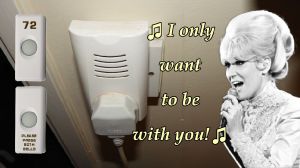 I got back up in the elevator quickly enough, entered the flat, and had a wee-wee. Got on the computer and emailed Jenny to see how She, Nora and Frank were getting on. Then the door chimes rang out the tune, ♫ I only want to be with you ♫.

It was two blokes wanting to come in to check the fire alarm. I returned to the computer while they did their duty. A minute later, I thought I’d ask them if they wanted a drink. I hobbled into the hallway, and they were gone! Ah, well!

I decided to get some templates done, or at least try to. I got one finished, one! Pathetic!

An email came in from Jenny. The gal is getting a little miffed with the lockdown, just like I am, I asked her if she, Nora and Frank had been given their vaccines yet, tried to cheer her up. Although she retains her sense of humour. She emailed back, but I read it and deleted it, and can’t remember it now. Tsk!

I got some yellow peppers done for the CCC Chilli-Con-Carne) diced them and added them to the saucepan of CCC.

I washed and changed into the made in India, Tru-Size® (that aren’t), pyjama bottoms- lounge- pants.

Got the CCC served up with a few potatoes from the crock-pot added.

I’d somehow used too much chilli powder or the yellow peppers because it was a little bit too hot for my tastes. But I still ate it all, and I savoured and degusted it.

Which satisfied my phagomania. Put the things to soak in the washing-up bowl.

I timed it perfect for catching the start of

two half-hour episodes of ‘Tales of the Unexpected’. I relished the thought of enjoying them. Hah!

I fell asleep at the first commercial break, and woke up as the second episode’s ending tune was playing. Makes me sick the number of times this happens to me! Gribblebonks!

For hours after that, I kept nodding off and waking a few minutes later every time; I gave up, got up, caught my balance, had a wee-wee, and stayed up. Sleep attainment of not to be enjoyed tonight!

What makes this worse, is I have to stay up late tomorrow, for the Sainsbury’s food order, it was the only slot available.

Worra load of old tosh people have given me about getting bored in old age – nowt to do, kipping all the time…. Chance would be a fine thing!