Around the Slab Square

Penned by our Nottingham WordPress resident the decrepit impecunious pensioner, of great senility and ill health Mr Juan Inchcock, with the hopes of encouraging.. er… well something!

On my last walk around Nottingham City’s abandoned shops… I mean City Centre, I came across some council workers removing a sign from the wall.

The graffiti written below it said:

“I thought it was hilarious!”

The Lions at the front of the Council House

Created by Joseph Else, the 2 stone art-deco lions stand guard on either side of the entrance steps. They are similar in design to the lions used to publicise the British Empire Exhibition at Wembley in 1924-25. There are alternative ‘names’ attached to them, some people call them “Menelaus and Agamemnon”, others “Leo and Oscar”.

Whatever their names, arranging to meet ‘At The Lions’ has become an essential part of Nottinghamian life since the building opened.

The Left side Lion

Where the higher class ‘Totties’ would gather, hoping to ply their trade with the more affluent visitors to the ‘Black Boy’ hotel (Now criminally destroyed by backhander seeking councillors)  just along the road. I’m told the Totties provided £3 and £5 servicing.

A popular meeting point for the shoplifting squads and locals. The regular appearances of Protest meetings, Big Issue sellers, a Parking Attendants favourite point of observational value and during the regular various foreign markets, an absolute haven for pickpockets.

The Right side Lion – The more popular of the Lions as a meeting-up place. 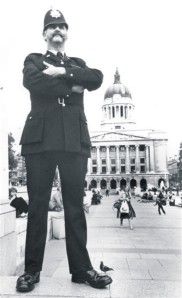 Where local PC’s Dennis ‘Tug’ Wilson (7′ 2½ inches) and Geoffrey Baker (6′ 8½ inches) would position themselves to keep a keen eye on the populous of the City, and responding to questions from the public, and always alert.

The graffiti is cleaned off regularly nowadays. The CPO’s (Community Police Officers), and occasionally a real PC can be seen using their mobile phones, and if they are needed, as soon as they end their phone call, citizens can speak to them. Nearby you will find the Big Issue sellers, street artists, beggars, Motorbility scooters, Skateboaders, Cyclists and other dangers. 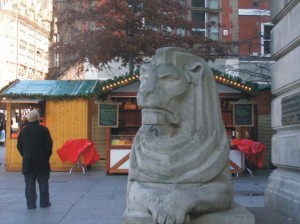 No Special Foreign Market’s were held then. But there was a speakers corner.

Themed markets are a regular appearance in the slab square nowadays. Themes including: Lithuanian Foods, German, Polish, Austrian, Australian Foods, French Products, and Asian Foods. Amongst the items you would not have been offered in 1963 are: Kangaroo burgers, Shark steaks and Blueberry candyfloss. 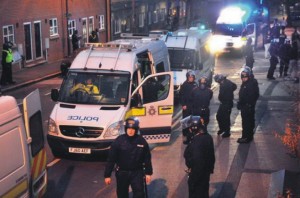 The Sacheverell riots of 1710, riots were a series of public disorder outbreaks that spread across England during the spring, summer and autumn of 1710 in which supporters of the Tories attacked property and places of worship of Whigs St Mary’s Church just off the Slab square becoming a victim.

The Spitalfield Riots of 1769, Luddite Riots of 1812, Reform Bill riots of 1831, Racial Riots of 1958, Protest Riots of 1981, and the Protest Riots of 2014 all had occasion to ply their violence, along with other locations, on the Nottingham Slab Square. The muggings continue, but most of them have moved to the suburbs where there are fewer CCTV cameras.

I recall a few skirmishes between Mods and Rockers, and between football fans occasionally. 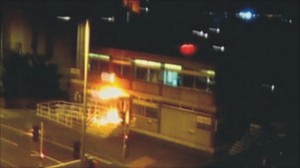 Black Taxi’s with white bonnets and boots lined up on the right side of the Slab Square. Fairs from 1/3p (5 ¼d) Some of the drivers could speak English too.

Trolley and Motor-buses with conductors ruled in this year. Tickets from 1p

Custom designed and built London style Taxi’s are now ranked off the Square. Fares from… well I don’t know, I can’t afford to use them nowadays.

The new Trams and Motor-buses without conductors rule now. Tickets from £1.80.

There were about 65 businesses around the square.

Lyons Cafe being another popular meeting place for Nottingham residents.

There are still about 65 businesses around the square, but a third of them are closed down.

There are now far more eateries, less banks, and the excessive proliferation of Pawn Shops, Charity Shops and Pay-Day Loan sharks were not around in 1963.

The new fountains are a popular place for children to play in and swear at passers by. Unemployed benefit seekers, immigrants, shoplifters, muggers, and wino’s to meet.

In the event of anyone being tempted to move to Nottingham for its Multiculturalism, Wealth, Serenity, or Placid lifestyle, as a result of these meanderings – Please read between the lines!

4 thoughts on “Historical Walks of Ye Olde Nottingham: Around the Slab Square”