Tried in vain to remember the dreams I knew I’d had and not enjoyed. Can’t even remember bits of any, just the emotions frustration, fear and failing?

Made cuppa and took medications later than I should have – but the sleeping late prevented me from doing it on time – not sleeping like. Taking me medication on time… which I didn’t.

Facebooked for hours and enjoyed it too making graphics while Coreldraw9 still lets me.

Gone ten when I got up and stirred meself into lethargy (Hehe).

Must get some cheapo replacement headphones to replace the ones I sat on and broke yesterday. (Tsk!)

Taking camera with me (If I remember too) to take some photos on m wanderings.

Has a good scrub up, teggies and shave applied me pain-gel, Haemorrhoid creams, a quick squirt of ‘Brute’ and checked on ‘Little Inchy’ – no blood that’s good, but the poor little mite was sore and tender-ended.

Got my stuff together and set off on me walk into town.

As I left the house, bearing in mind it was by now well gone 1130hrs and the sun had been shining for a while although still bitterly cold, I took a picture of the car parked outside the flea-pit with its windscreen still well frozen over with ice!

So pretty – but blooming cold!

Rang Sister Jane en-route to see how they are. Busy as usual dining out, Shows to visit, Meetings to attend etc.

As I was nearing the college on Mansfield Road I thought how wonderful the sun and sky looked despite the bitter cold and took a photo of it.

I walked through the bus-station into the Intu Victoria Shopping Centre top level.

Very busy as to be expected… but the ambience was not good, many sad irritable and angry looks on people’s faces.

I plodded through to the end out and down to the Wilko shop below to see if they had any headphones I might purchase.

They had a decent range to choice from, not that I was any the wiser for reading the instructions on the packets like.

So I bought the cheapest one with in-the-ear plugs.

I then walked down Clinton Street, where the police had a CPO on duty chatting to a stallholder. I assume she was there to keep an eye on the rogue street traders that have been in the local news.

Took a photo of both ways as I joined Clinton Street, a decent crowd of irritable, spitting, swearing Nottinghomians.

Made my way through to the Intu Broad Marsh Shopping Centre via Bridlesmith Gate. I wanted to take a photo of the gallery there but the crowds were too dense. (If you see what I mean? Hehe) 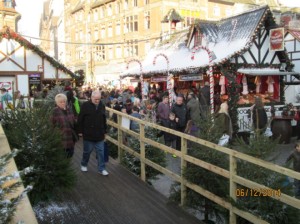 Bothered me that did, so much for Christmas Spirit?

I hobbled into the 99p shop and had a wander round, coming across some headphones of the same make and model of those I’d just paid £1.89 for at Wilko. So I got a pair, along with some behind the ear ones at the same price.

Some nibbles for the nurses on Monday, and then walked to the end of the centre and put and into town.

Many street artists were present again including near to C&A the Salvation Army had a group of six belting out the Christmas tunes.

Very good they were too.

So I dropped a £2 coin in a blokes collection pot.

I then walked into the City Centre to take some photographs of the Winter Wonderland Fayre and ice-rink. It was very busy.

No one else seemed to notice the shop-lifters being taken out from Primark to the police car.

Even the horse ride had plenty of folk on it.

The ice-rink was full as well.

Plenty of fallers to see while I was trying to take a photo.

I fought me way through the crowds and escaped the crush without injury and made my was up King Street towards the bus-stop.

As I turned the corner a group of four foreign looking chappies were giving us a bit of upbeat jazz with one of them dancing away.

They were good too.

I caught the bus home and dropped off at the Co-op to get some bread then back to the hoppit.

Tried the headphones (The 99p behind the ear ones) but they weren’t loud enough for me dodgy ears to listen to words without missing any and struggling.

Still, I could just hear Nat King Cole singing while I updated this Diary and gorrit posted.

Took me medications at 1700hrs and did some blog reading and facebooking fer a bit.

A very slight involuntary escapage of wind caused me to adopt the usage of the air freshener… twice!