0125hrs: I woke, I think, in the middle of a marvellous dream. I was living in a big mansion, with servants, cooks, bottle-washers, cleaner uppers, computer experts, a butler and a full time slightly plump, attractive hairy nurse in attendance. I spent most of my time in the Clinic room during this ecstatically euphoric ailment-defeating astonishingly lifelike and undisputedly believable (At the time) dream. Needless to say, this nocturnal vision’s cessation and my realisation that was not true brought about a feeling of despondency. With despair and desolation. I got the pencil and scribbled some notes on the pad. I soon got back to sleep, harbouring futile hopes of returning to the dream. Humph!

0355hrs: Woke-up with a start, no idea why, but I was wide-awake almost instantly. I waited for the body to engage with the brain, then started to work out what’s what for today. With the Surgery messing my blood test appointments around, there is none today, so I must remember the swine have made me one for tomorrow at the same time as the Winwood Social Hour. Grumph! I suddenly felt the cold. Blimey, it was nippy this morning. 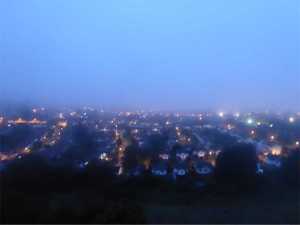 Forced me out of the £300 second-hand recliner and off to the kitchen. The cold hit me as soon as I entered. With the previous two nights being so humid and warm, I’d left both windows open as far as they would go. Brr!

A bit of a mist lingering outside this morning.

I got the Health Checks tended to. Very little change compared to yesterday’s readings. All looked fair enough to me. 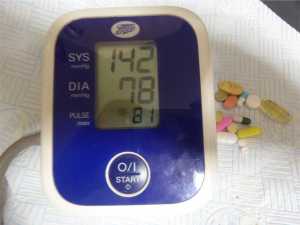 Took the medications, and off to the Porcelain Throne for a Trotsky Terence affected evacuation. Then got on with what proved to be a long slow job of updating the Tuesday Diary.

I eventually got it finished and went to post it off. I came across some news about the Saddleworth Moorland Fire. Here are some photographs of it.

The fire brigade has asked for military assistance in fighting these fires.

I went to the comments then reader section of WordPress, and this didn’t take long. One comment and only a few new posts on there.

I relaxed a little when I got the post sent off. And the ailments came to mind. Or rather, the lack of hindrance or hassle from most of them. Of the many to choose from, only Duodenal Donald was any real pain, and that was not as bad as it could have been.

I went on Facebook to get caught up. Fingers crossed that it will let me.

No problems today, got loads done.

Getting late on int day now. I’d better get the ablutions done. Then take rubbish bags to the chute and get some bread from the sops on the front. I’ll go to Aldi, but I can’t rely on me, not overspending. No, best I have a trip on the bus down to Sherwood. Hehehe!

Enjoyed the cleaning up session today.

Bagged up the waste, and off out, dropping the bag down the chute on the way. 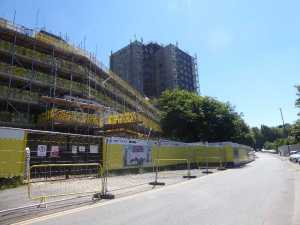 I took this shot of the new build and Winchester Court on my way to the bus stop at the end of the road.

And a few of us old uns got on the Bestwood

I went into the Co-op store and came out with more than I had planned. There are reasons for this (Coy mode adopted). They had some Regina towels on offer price, so I got a packet. They had some Oven-bottom-muffins in stock, decided to buy one and freeze them. They also had some fresh pod peas in on the shelves. So I

bought two packs. Also, they had some Hoisin sauce on sale. Which I thought would go well with the Hoisin pork ribs when I eat them? No, I don’t believe it either, Haha!

As I made my way to the Wilko shop to get some liquid soap and some AirWick Aero Spray, I thought how American the view was of up Mansfield Road. 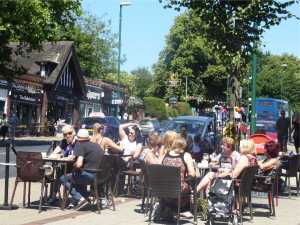 Much to my surprise, I came out of Wilko with just the two items I had gone in for!

A touch à la France outside the expensive cafe further up the hill. With it’s Al Fresco £4 a cup of coffee seating area for the rich Nottinghamian’s to show off and block the pedestrians. Not as busy as I thought it might be, but then again the missing affluent Nottinghamian’s may well be on holiday. But, of course, this does not bother me, that I have no one to go with on holiday, couldn’t afford it anyway; and the medications and ailment problems also prevent this.

I got to the bus stop and, Roy’s better half got on at the same time. We had a laugh and natter en route.

We got to the lobby, and they all sat down. I sneaked one of the cream cakes out of the box and gave  Roy’s better-half the container with the other one in it. Should cheer the gal up, cause Roy was not feeling very well. I said I would be up later with my hearing aid tools to sort out his blocked tubes. But, he said, “No need, I’ve had the audio clinic do them. “Huh,” I said smilingly, “I know when I’m not wanted, I’m going to go home and sulk, now!”

Bade them farewell as I got off of the elevator. Into the flat. As I opened the door, the tremendous heat hit me! I went through and opened the only windows I could, as far as the security locks would allow me.

Beautiful view from the kitchen window. After I mangled my fingers to get the camera out through narrow gap permitted. Huh!

I checked the potatoes in the crock-pot. Shelled some pod peas and got the oven heating up ready for the Mashed steak in porter gravy (Whatever that is). Opened the ready-meal, put a bit of hoisin sauce on it and added much strong grated cheddar cheese to it.

Got the rest of the food put away, and did the Health Checks. (I ought to dead I think, the Sys was down to 118 and the pulse down to 71?) Although they perked up a bit on the final checks.

While awaiting the cooking I had half-an-hour to go on Facebook and post today’s photo’s to the TFZer site.

Watched the Korea v Germany match while eating the nosh.

Ate the nosh-up and did the pots. Got down in the £300 second-hand recliner and started to switch between the two boring, mind-numbing World Cup matches on offer at the same time on different channels. I kept drifting off into Nodland, but only for a few minutes each time. Blissfully, I went all the way off to sleep after the matches ended.

The phone rang, t’was Sister Jane. I’m afraid, my being in a state of just being roused into imitation-life, I am not sure now, what was said. I shall have to ring Jane tomorrow, in case I missed something important.

It was near-impossible for me to get back to sleep, with the brain chattering away to itself about my wanting to retrieve what Jane had told me, ( I had a feeling I’d either done wrong, or not done something I ought to have? Hehe!) and the body refusing to get up out of the chair.

So, I put the TV back on, that did the trick!

Ten-minutes or so, and I was off into the land-of-nod!