23:52hrs. I woke up, the mind racing, battling incoming thoughts, ideas, and fears. Full of inconsequentialities, unconstructiveness, negativities, and dubiousness. All unhelpful, and ridden with habitual scepticism and lack of logicality or certainty! Eventually, the brain settled back into its accepting-mode of nebulosity and ambiguousness, and I released my overly-puppy-fatted bellied body from the £300 second-hand recliner.

The pins were solid as rocks, but less filled with fluid I think than yesterday morning. I’d have taken a photo, but haven’t found the camera yet!

Then it flooded back to me, the horrible afternoon I’d had yesterday. Memories were few and far between, from when I left the Social Hour hut. Thankfully I had taken some photographs to use for updating the Thursday post that tweaked the brain-box a little. Oh dear! Memory blanks, Shaking Shaun and Dizzy Dennis all had a good go at me I reckon!

Off to the Porcelain Throne. An even messier affair than the last one. Still, I found myself gently singing songs to myself as I cleaned things and myself up. Going potty has its benefits sometimes. Hehehe!

Got the Health Checks done, took the medications (Unsure of whether I should take a Furesomide tablet or not. I made a brew of tea.

Computer turned on. I’d received an email from the surgery. After all the fuss and hassle of sorting out the four appointments for me, the Shingle injection has been rearranged again. For Thursday 14th, at the same time as the Winwood Social Hour again! My luck is getting thinner on the ground lately, and the new ailments, etc. (Legs, foot, Kidneys, and Back-pain-Brenda, combined with memory blanks and dizzies are getting to me. A chance of Self-Pity-Mode adoption now Hehe!).

Got on with updating the Thursday blog. Then went on WP reader.

No wee-weeing, other than the initial. Should I be glad or sad? Tsk! At least, there has been no dizzies yet, and that’s a blessing!

Spent some time creating this post, and a couple of close wee-wee’s were needed.

I got the ablutions sorted out, no shower this early of course. But the Morrison order should be arriving in an hour (twixt 06:00>07:00hrs), so I pressed on with the scrubbing up.

The dull kidney pains started as I got in the wet room, but eased off twenty-minutes later, then came on and off at will for the rest of the day! Tsk!

Where the second Porcelain Throne session was activated. A lot less messy this one, almost a pleasure. Haha!

Got sorted and dressed, gathered the washing bag for the laundry later.

Went on Facebooking while I waited for the Morrison food to arrive.

I couldn’t face any breakfast today. I think the kidney aches are putting me off, perhaps? 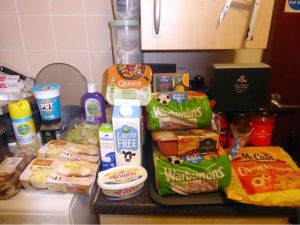 Ashley arrived with the Morrison fodder for me.

I got it stored away. I now have an almost full freezer, fridge and several storage cupboards. Hehehe! They sent a freebie bottle of cordial, Melon, strawberry and something else. I can pass this on in the shed for someone. The milk bread was not so soft today as usual. Grumph!

I went on YouTube while awaiting the one-off delivery from Ocado.

I’ve ordered some Marmite foods that Morrison do not sell from them. And, some Glengettie teabags. Two boxes of the normal Gengettie which is undoubtedly my favourite one of them all. And a box of Glengettie Special Gold teabags to try out! (Others that I am fond of), Strong Assam, Yorkshire and strong English Breakfast teabags, I have in abundance!

When the delivery arrived, I sorted it out.

I now have, Marmite flavoured biscuits, Crisps, Cheese, and Rice cakes stored away, along with the Genghettie tea bags and other stuff.

Some very nice looking turnips, and Chinese leaves. However, both are high in Vitamin K, and there is too much for me to eat while they are fresh. So, I took the leaves and two of the turnips with some food bags with me to the Nottingham City Homes, Winwood Heights Flats, and Administration shed, Generalleutnantess Wardens Temporary HQ, Willmott-Dixon lecture room. Breakfast and tea-break room, Sarcasm & Insult distribution area, Tenants Socialisation Shed. Rumourmongering Clinic. Shoplifting training room. Telling Inchcock off Zone, Things like porcelain and pottery to be stolen from, and residents room, shed. If any of the gals are in, they can have a good half of the Chinese leaves and two turnips if they like them. Which will do me a favour, cause it will stop me overeating, cause they are high in vitamin K as well? But Nurse Nichole ♥♥♥ tells me I may eat just a small amount.

I set off down and to the shed, where Obersturmbannführeress Warden and Ballerina Julie was working away. She took the cordial, Chinese leaves and turnips, I’m glad to say.

She mentioned that yesterday at the Social Hour: I was spotted falling asleep! I am blown if I can remember doing so. But it is believable with how I felt at the time. Oy Vey! I hope that doesn’t start again, the dropping off at any time, anywhere. Oh, dearie me!

I left and returned to my beloved Woodthorpe Court, with the kidney area becoming painful again. But this did not stop me seeing the funny side of the sign on the fenced-off walkway, with the thirty-foot drop on the right as I hobbled by it. Hehehe! I took these photographs and doctored them when I got home later, with Lovers’ Leap wording added to them. Hahaha! I must be feeling a bit better if the humour is returning! As usual, I anticipate regretting having said that! 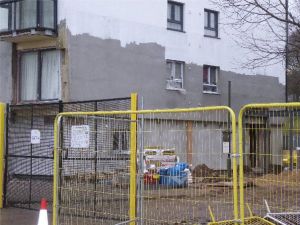 As I crossed over to get to the flats, I snapped the bottom part of the building. I think that the new doorway being built on the right, will become part of the passageway through to the being built Winwood Court, and the Oberstleutnantess Wardens Holding cells, offices and possibly the bouncy castle on the roof? Haha!, I said I must be feeling better, I might be, right?

I met Malcolm in the foyer and passed acknowledgements with him.

As I got in the lift, suddenly I didn’t feel any better, though. Hell of a visit from Dizzy Dennis made sure of that. I got out of the elevator and had to stand to lean against the wall for a while, before carrying on to the apartment. The drilling and dust continue from the workers doing sprinkler-prepping work. Seem and sound decent enough chaps to me.

I checked, but both of the washing machines were in use. Ah, well! 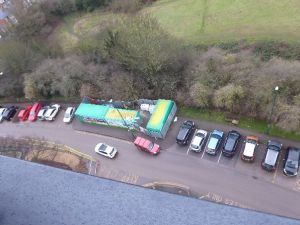 I got in the kettle on the boil.

I perched myself up two steps of the ladder so I could get beyond the ridiculously wide new unwanted window ledge, to take this photograph of below.

I think that might have been neighbour Malcolm in the white car escaping. I know he bought a new white one recently? Haha! He might be off to pick up his grandkids, I reckon. Or go to the bookies. Or to threaten his Bank Manager. Haha! Of course, it might not even be Malc at all!

Then, I can report that I had a four-minute brewed, first ever mug of the ludicrously pricey Ocado Glengettie Gold tea!

Chuffing hell, it was good!

This Gold variety is a blend of Assam and South African black. It has a flowery tang with it; Jolly tasty, but worth the extra cash to me.

The 100% Assam Glengettie is costly enough and not so sweet tasting, so I’ll stick with that one as my 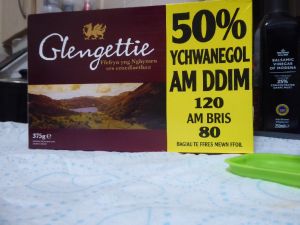 favourite still. The next best is the Special Morrison Assam. Then the Gold Glengettie.

All three of them put the weak, watery, bland, tasteless but called Strong Twinings Assam to shame.

I think I’ll do some sandwiches for the meal today. With perhaps some pickled gherkins, Chinese leaves, tomatoes and a knob of Marmite cheese maybe?

I’ll see how I feel later. The old appetite has lessened lately. Might be due to the kidney problem?

I made a mug of Morrison Special Assam and nipped to the wet room while the kettle was boiling up, just to check that I had not left any lights or taps running. That little walk was hampered by the legs hurting again, not the left heel of the foot though? I had a look at the pins. 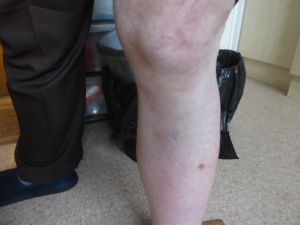 The impression of a face that was above the knee yesterday had changed. But what into, I could not decipher. Ah, is it like a Skoda car badge?

But the legs had certainly got even harder and more fluid in them compared to earlier this morning.

So, back to the kitchen made a brew of Yorkshire tea and swallowed a Furesomide belatedly, with the lunchtime medications and did the Health Checks. BP was still very high.

I spent about an hour updating this blog further, then it started: the wee-weeing! The first one being an LHBLWWs (Long Hosepipe-Blasting like Wee-wee), all following ones were of the LSPWWW (Long Slow Painful Weak Wee-wee) and frequent, mode. I’m getting fed up with this! Hahaha!

Got the cold nosh prepared after another three hours on the computer, that has CorelDraw playing up now! Grumph!

As I got the simple meal served up, the bloody weariness and drained sensation returned again 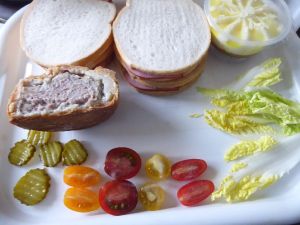 , suddenly so tired and weak.

I think that with no one seeming to think these periods are worth doing anything about, is more annoying than the periods themselves. Whoops, a drop of self-pity slipped in there, sorry.

I couldn’t eat anywhere near all of the nosh, Again! Yet it was tasty enough? I expect to get told off for eating white bread and my weight again soon. Sorry, Sister Jane. Hehe!

I got settled down very early again, in the £300 second-hand 1968 rusty, rickety recliner with some spring water, jelly babies and got the TV on.

The legs felt like I had worms inside wriggling about, but the redness was getting far less.

The fatter fluid container on the left was now filed more than the one on the right, another reversal from the layout this morning. Hehehe!

As for watching TV: the A-team, Boon and Pie in the Sky… no chance! I nodded off at the first set of commercials during the A-Team!

Waking up hours later, in need of the Emergency Grey Bucket. So often it is hard to recall how many times it was utilised. Any more bits of sleep I got in, seemed to be in ten-minute segments between wee-wees!