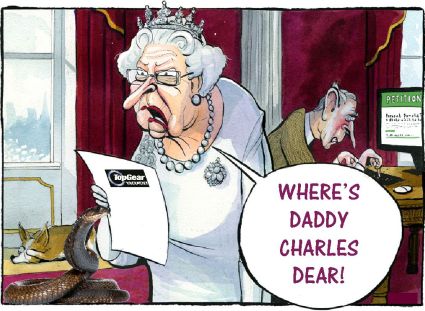 23:30hrs: After another broken nights sleep, I woke and needed a wee-wee.

As I lowered the £300 second-hand 1968 built, approaching-antique, rickety recliner, one heck of ‘Clunk come Thud’ nearly bounced me out of it! Shook me a bit that did! The wee-wee did not feel an urgent one, though. I continued with the button pressing again, and it all went smoothly. When I say that, I mean as smoothly as the chairs mechanism is usually, although that is not smoothly exactly… I’m making a mess of this statement ain’t I. A spot of acataphasia there, sorry. I checked on the new welt on the ankle, and later made up this photograph of yesterdays and this morning to see how it is coming along.

Well, it’s certainly prettier than it was on Sunday. Hehehe! Less swollen too. What it was, or is, remains one of the mysteries of my existence. It seems to be clearing up, so quickly as well? Also, I think the fluid-retention is going down as well. But, we’ll see how it goes.

The wee-wee, was for once the same as yesterday, of the VSWWW (Very short Weak-Wee-wees) variety. Unhappily, Little Inchies Fungal lesion had been bleeding a fair bit.

I made a brew of Glengettie tea, and as I was about to put the milk in, I had to divert to the Porcelain Throne, on which I found myself excogitating over, of all things, different types of blood and why does mine seem to change colour, well shade, so often? It always comes out the same deep red/maroon each week when the sample is taken for the INR Warfarin test. But when it escapes when I cut myself, or Haemorrhoid Harold or the Fungal Lesion haemorrhages, the colour seems different to me?

I did what I could to clean up Little Inchie and medicate things – Oh boy, it makes you wince, this job does!

I antisepticated the hands and contact points, and back to the kitchen to throw away the now gone-cold mug of tea and make another one. I’m a bit of a maleurous character, you know! Tsk! Still, I mustn’t make a foofaraw about it.

Got the Health Checks done, and made up last weeks record on Excel. 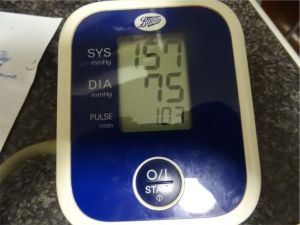 Crikey; had the pulse shot-up!

At least I know the metal and plastic Aorta valve replacement is working! Maybe too well for some reason. Why, though?

I got on with updating the terrible Sunday diary. Getting it finished after a lot of unwilling concentration was used up.

The aching kidney area pains kept starting off, sometimes for only a few seconds, others for ten minutes or so, and then clearing up. Another Inchcockian Mystery! I went on the WordPress reader and then began this blog.

Three hours or so later, I made a pot of porridge for breakfast.

Got the black bags and recycling made up ready to take out with me.

Got the ablutions sorted out. Readied the things and set out on my way in search of some Glengettie tea bags and Marmite biscuits. 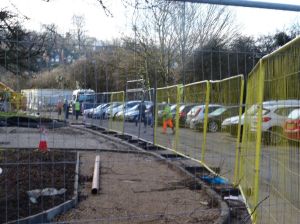 The Willmott Dixon sub-contractors were out in force this morning. 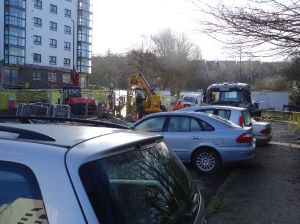 crockery and pottery get stolen from, Rumourmongering Clinic, and somewhere to rest while waiting for the bus, Portakabin.

The workers were busy at the Winchester Court end of the road too. 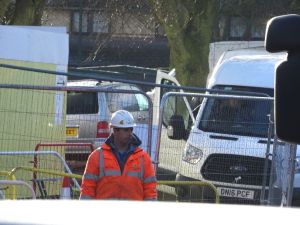 I took a long distance shot over the top of a parked car of Willmott Dixon’s InCharge Ian as I got further along.

Lynne arrived as I got there, and had a little chinwag. It seems that a throat bug had hit our community. Gruppenfurheress Ballerina and Warden Julie had copped for a dose. Several tenants had lost their voices I was told.

I decided to walk down Winchester Street and catch a bus into town. Said my cheerios, and off I went. Not very far though, I’d forgot my card for the Audio clinic. Tsk! So, I hobbled back to the flat to collect it. I met Mary on her way to the hut, and we passed pleasantries.

I could not find the card in the flat! So, I’ll have another search later, so, no collecting the hearing aid batteries today, then.

I met Jenny on my way back to the hut. I might as well catch the L9 now. But Jenny, another victim of the Winwood Court bug, was croaking a bit with her throat infection, bless her. Had a chinwag or two with the other tenants as we waited for the bus. I did rather well with the crosswords en route. Funny how this can happen. I flicked through the unfinished puzzles, that I had been doing for months, and got a few answers in. Another day, I would get none solved? One’s frame of mind at the time, I suppose.

I got into town and alighted the bus with the other residents, and made my way to the Waitrose store to see if they had any Marmite biscuits on sale. On the way, I noted that the closed down Pound World shop was now occupied by Poundstretchers. This momentarily lifted my hopes of getting some Glengettie tea bags as I entered the place.

But, no! They didn’t have any in. But, they did have some stuff to tempt me to buy, which I did. Tut-tut! The ‘Wheels’ chocolate packets had a variety of flavours, and I got four packets of them, to use at the Social Hour, cause the clan seemed to love them last week. Some instant potato with onion, in pots too as well. I got two packets of shorties besides. I met Mary inside, and we poddled around together, nattering as we went. Mary will be moving soon, to some other flats in Sneinton, where the heating costs are around half of what they are at Winwood Heights. Can’t be helped that, the Nottingham Heating System does not reach as far as Sherwood. Shame, but there you are. 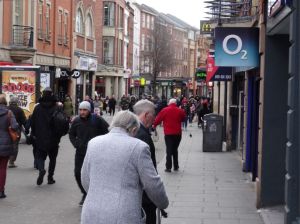 I left Mary as I went into the Waitrose shop, to have a look for the Marmite biscuits. But, they did not have any, so I left and made my way down Milton Street, across the lights and along Clumber Street.

THe Nottinghamians did not seem to be in a happy state of mind at all today. Mind you, it is a Monday. Hehe! 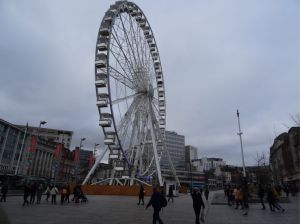 I walked down to the end and onto Long Row. Having to avoid several of the Nottinghamian Pavement Cyclists on the way.

The Slab Square had the Nottingham Eye up again. I think it was being tested before opening to the public.

But it was too early in the day for me to have a go on it, not opened yet. I stood at the side of the Council House steps and tried to take a panoramic shot across. But the resulting picture came out with a third of it as just black? So I had to trim it to get this dismal effort of a representation below.

I read that the population of Nottingham is estimated at 332,700. See here how they rush cheerfully along, smiling, happy and contented. Hehehe! 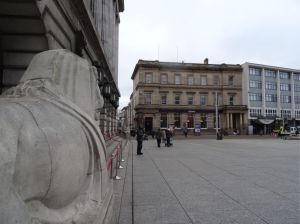 I went forward a few paces and turned to my left to take the next photo, from the back of one of the Council House Lions.

Looks a bit sparse of the populace, doesn’t it?

I had a visit at this stage, from Dizzy Dennis. Luckily the cement lion was at hand to support myself with from going over. Phew! It didn’t last long, though.

I decided to head for home. I poddled up Queen Street and took some photographs of the Nottingham buses. So I can post it on the TFZ site for Sandie and the gals to have a look at. 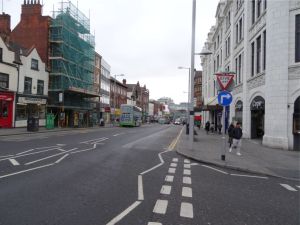 Plodded to the top of the road and I took a picture along Upper Parliament Street. Rarely, have I seen fewer vehicles on this stretch of the road during a weekday.

I did note that a lot of people seemed to be wearing white shoes today? Just thought I’d mention it like. 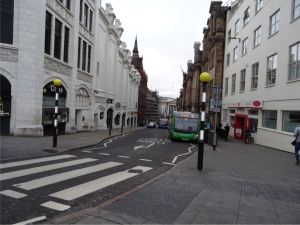 I then snapped this shot of a view from the top of Queen Street. Once again, the lack of Nottinghamians was concerning.

No street sleepers at all? Ah, but that could be understandable for a Monday. Many of them will still be in bed at Mummy and Daddies, perhaps? Or in a taxi on their way to the 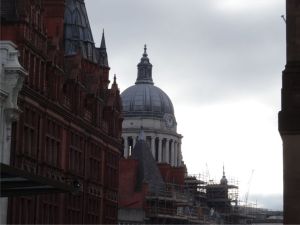 pitches, having stocked up with the required accoutrements with Daddies bank card? Mmm!

One last City photograph was taken, of Little John’s bell tower above the Council House. A bit of a moody one as it turned out?

I caught the L9 bus back to the flats and even solved a few more crossword clues on the ride. Smug Mode Adopted!

Back at the flats, I popped into the Nottingham City Homes, Winwood Heights Flats, and Administration shed for the Generalleutnantess Wardens Temporary HQ, Holding cells. Sarcasm & Insult distribution area, Tenants Socialisation Shed. Rumourmongering Clinic. Telling Inchcock off Zone, Things like crockery and pottery to be stolen from, and residents room. I gave Lynne a caramel flavoured box of the ‘Wheels’ to hand out, and we had a little chinwag.

As I left to go home, I met Penny also on her way home. She was still suffering from her throat infection bug, bravely, bless her. We parted, after a chinwag in the lift, and I got into the flat, feeling drained for some reason.

Got the Health Checks done and got the oven heating up.

I had an in-depth rummage around for the Audi Clinic card. No luck!

Got the Cumberland pie in the oven.

I had another in-depth rummage around for the Audi Clinic card. No luck!

Added a part-baked baguette to the tray in the oven.

I had yet another in-depth rummage around for the Audi Clinic card. No luck! Depression Mode Adopted! 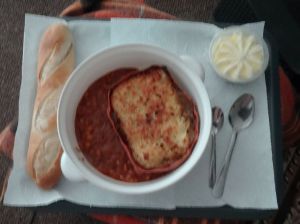 Got the last Health Checks done.

Served up the meal. Cumberland pie, beans with passata and BBQ flavouring and a baguette to soak up all the juices. Marvellous flavour.

A limoncello dessert to round it off.

I got the pots washed, had a wash and settled down earlier than usual for watching the TV. A bit of success today, I got through an entire episode of the A-Team without falling asleep! Oh, Yes!