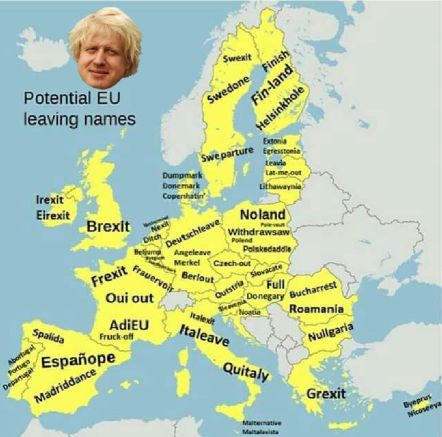 01:35hrs. I was up and out of the £300 second-hand Ci 1968 recliner and utilisationing the Emergency-Grey-Plastic-Wee-wee-Bin within a minute of getting my balance and on my feet! Although I coped without too much hassle in rising this morning, the left foot heel, and the right knee patella were both tender and painful. But this didn’t phase me, because, Kevin Kidney, Arthur Itis, Colin Cramps, Anne Gyna, Hernia Harry, Reflux Roger, and Headache Henrietta were all being compliance in the hassle stakes. Fair enough, Duodenal Donald did kick off later, and Henrietta in the afternoon. But things could have been so much worse. The fear of the knee giving way again was my only real worry.

With staying up late (for me) last night, in case the Nottingham City Homes electrician or plumber arrived to sort out the shower for me, meant my sleep pattern was ruined again, although the mystery phone-call waking up must take its share of the blame. Tsk!

I cleaned and refreshed the emergency bucket, and got on with the Health Checks. 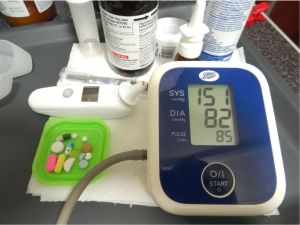 The Sys was down, but the Dia was up in relation to this. Not that I can fathom out if this good or bad.

Oh, I do annoy myself at times! Klutz!

I got the computer on to update Monday’s blog… 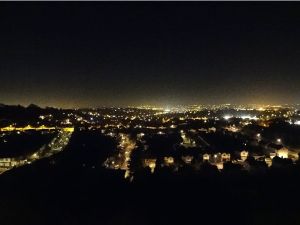 I went to make a mug of tea while it was down. Only one of the five blue lights were showing on the Virgin box.

The sky and view outside looked rather attractive, so I made a snap of it. Almost like a painting. Don’t you think?

I pondered for a few moments, on who it was that may be out and about in Nottingham at this time in the morning. The emergency services, the muggers, the Pavement Cyclists, sleeping security guards, the burglars, street-sleepers, delivery drivers, importers of illegal immigrants, drug gangs, social security fiddlers, MI5 agents, alcoholics, shoplifters, night porters, Takeaway workers, Dentists working out how to charge more for unnecessary work. Social security claimants, swapping their children with other parents to pretend they each have 24 children to support. NHS staff, the Chat-line operatives, Alcoholics Anonymous, Polish and Romanian gangs stripping the cables from the motorway, and Politicians up late fiddling their expenses, etc.

Back to the computer, and it was working again, now! Hurrah! Made a start on the updating.

Off to the throne. Another messy evacuation. Tried the shower, red lights again. Turned it off. Little Inchies Lesion had been bleeding again.

Got on with the blog again, and finished it off and sent it to WordPress.

I began doing this post for about three hours, then decided to get some breakfast.

A savoury one this morning. Marmite cheese and biscuits, mini pie and a few pickled mushrooms, with a mug of tea.

I watched some accident clips on the U-Tube site. Then went on the WP Reader.

Tried the shower, but still not working. I finished off the Tuesday post. Stand-up ablutions tended to.

Got myself dressed and everything ready for a trip into the City Centre. I was doing the checking to make sure everything was alright and no taps left on, doors open, the stove left on, electrics were safe, etc. when the door chime chirped into life.

08:40hrs: It was two chaps from the Nottingham City Homes maintenance team, come to look at the shower-head. They checked out the state of the head. Declared they would be back shortly and went to get a showerhead from the van, presumably.

They returned with mud on their shoes and set about fixing the shower for me. The replacement head did not have any controls for the spray. The man told me I can buy one from Wilko if I wanted one. Which is what I decided to do later today. Not so much a luxury for me, more a need. After I have bleeding from the lesion or rear end, I feel the need to have a good lather-up and a strong jet blast from the showerhead, to clean things up well-enough to feel comfortable. I can also give the feet a blast, being as it is uncomfortable for me to reach them. Ah, the joys of old-ageing! Hehe!

I thanked the lads and off they went. 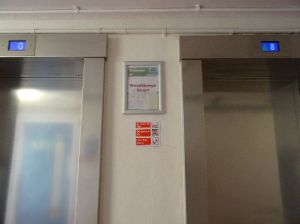 Followed shortly after by me. Both of the lifts were working again.

I made my way to the Nottingham City Homes, Winwood Heights, Generaloberstesses Wardens Temporary HQ. WC, Holding cells. Rumourmongering Clinic. Sarcasm & Insult distribution area. Tenants Socialisationalistic Area. Telling Inchcock off Zone. Crockery and pottery to be stolen from location, and residents porta-cabin. I greeted the five residents in the room with a cheery “Morning each, hope you’re all well!” In return I got, a ‘Hmm!’, a ‘Yea’, a blank stare of surprise, and two ‘Morning’ in reply! I said, “Well, its good to know you’re all so cheerful!” Which got a couple of laughs. We had a little natter between us, which I liked.

I advised Obersturmführeress Warden Deana, and Sturmbannführeress Julie of the shower having been done for me, and a little chinwag.

Out to the bus stop for another little chinwagging session. Caroline from the Care Home further up the road provided me with a bit of gossiping en route to town. She is not in good spirits at the moment. Bless her. I tried to cheer her up a bit. 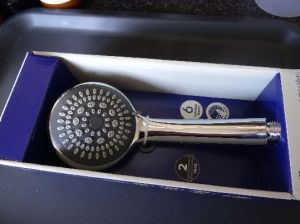 We alighted the bus and parted to do our own shopping. I went into the Wilko store in search of a shower-head and liquid soap flakes.

I got the shower head for £11, which I thought a bargain. It has variable settings for the water jet on it. I ended up at the checkout with this head and a bag of jelly babies, the Liquid Soap Flakes, laundry freshener and an air spray.

Then I paid and departed walking over the road and to the Tesco store. I spent a good while sorting through their out of date bread, ending up getting a pack of the bread thins,

and they had the Sweet & Sour pot noodles on offer, so I got a couple of them.

Then I had a wander around, along Milton Street and up by the KFC through Trinity Square, down Trinity Walk, then over Parliament Street and down King Street to the slab square.

There were so many more retail units closed down in Nottingham than I’ve ever seen. This does not bode well for the future.

The things I’d seen today, closed shops, sour faces, etc. had got to me. I felt a little depressed. Made my way up Queen Street to the L9 bus stop to wait for the lift home. A gentle tap on my back was felt, it was Caroline joining me at the stop. She chatted with me as we drove home on the bus. I gave her a take-care and thumbs-up as she departed to her home.

Had a quick few words with the residents getting on the bus I’d just got off of. I enjoy having these sarcastic comments, insults and smiles thrown at me from the gang when I get back home. Hehehe!

I popped into the Nottingham City Homes, Winwood Flats, Brigadeführeress Wardens Temporary HQ, Toilet, Sarcasm & Insult distribution area, Rumourmongering Clinic. Tenants Socialisation Shed. Detention cells. Telling Inchcock off Zone. Things like china and pottery to be stolen from, and residents room, and informed the Guards that I had got the showerhead, and gave them a flash of it. Hehehe! Deana kindly told me to let her know if I need any help fitting it. Bless her cotton socks!

The temporary-footpath from the bus stop to Woodthorpe Court that is partly-shared with the contractor’s cranes, diggers, tractors, the delivery lorries, and dog-walkers will be sadly missed when its all over (If I’m still alive then, of course). As will the heart-helping shocks of nearly getting knocked-over or into.

Crossing this road to the foyer is most inspiring and nervous-making! Haha! They have no

options but to block things, it’s the nature of the building game.

Into the flat, had a wee-wee SWWW (Short-weak-wee-wee variety) and put the purchases away.

Putting away the liquid-soap-flakes, the bottle slipped through the fingers as Colin-cramps interfered with the process. The good part was it didn’t burst open… the sad part is it bounced up and landed right down on my corn!

Then I got the nosh planned. I would have some meat sarnies using the wholemeal bread thins, with plenty of sliced tomatoes.

I got the oven warming up to cook the oven chips, then made up the sarnies. I might add a few pickled mushrooms as well. Ah, the life of a megalithic, epicurean, gastronome! Hehehe!

I put the chips in when the oven had heated up.

I got a rinse and changed into the jammie bottoms and tops for once. Checked the pins (legs). The ‘Nobbliness’ was returning, and the fluid appeared to be increasing again?

Had another wee-wee, they seem to be coming more frequently tonight. Did the Health Checks.

The whole nosh was excellent this time out. The chips, although pale looking, tasted wonderful. And I judged the amount right for my taste-buds for once.

Had a wee-wee. Washed up. Sat down with a mug of tea, and fell asleep.

But not for long, in fact, only about an hour or so. An almighty (or so it seemed at the time) banging that lasted only a few seconds woke me up.

I got up to take a look around. I ended up not knowing if I’d actually heard a noise or dreamt it? Nothing untoward found.

Did the last belated Health Checks and the medication imbibing.

As I lay there back in the £300 second-hand rickety ci 1968 recliner, I wondered if I should watch the TV or not… it didn’t matter, off I drifted into a nightmare-ridden sleep! Tsk!