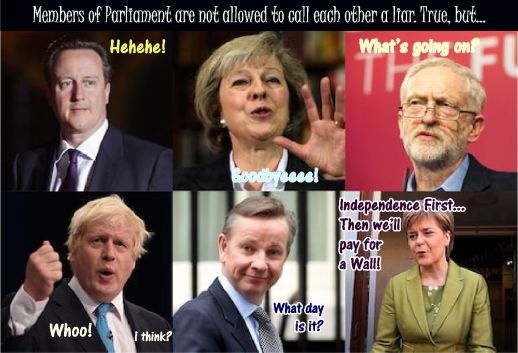 04:40hrs. I woke after laying praying futilely for sleep for hours and hours. And an hour-and-a-half after eventually dropping off. Phwert!

Within seconds, I was in need of the EGPWWB (Emergency Grey Plastic Wee-wee bucket). Again, I was caught by surprise with how full it was. I must have been using it without realising a few times during my microscopical sleep? 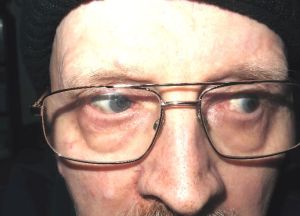 A most delusive sound rang out from somewhere. A kind of vague, wailing noise with coughing sounds in the background? This happened twice in the space of thirty seconds. It was rather loud. I heard it easily enough, without any hearing aids in? But couldn’t locate the source of the worrying noise. Tsk! The plumbing, perhaps?

I took the nearly full bucket to clean and be disinfected in the wet room. Job done, I ventured to try and find the source of this mystery lamentational noise. To the kitchen first. Nothing found. Got the step ladder, which is now needed since the installation of the new light & view-blocking. thick-framed new windows, to see below, outside. No untoward signs. Then I had a look and listened with the door held open. Nothing heard or seen. Another Mystery of my beloved Woodthorpe Court: that lies somewhere between the twilight zone and a wormhole slipping through a tear in the fabric of space & the spacetime continuum. Apparently, illusion, delusion, & hallucination ridden! Mmm!

The fingers started to at electrocuted again, when the tips touch anything. The updating of the Friday blog was a nightmare, well, daymare! It took me so long, I’d almost grown a head of hair by the time it was completed and posted off to WordPress.

I took the medications and did the health checks. Sia 166, Dia 85, Pulse 76 and the temperature at 35.6°c, then took some photographs with the new, freshly charged Canon camera.

I managed to take another unknown mystery photograph I found later on the SD card?

Ah well, it’s in keeping with all the earlier cameras – or is it me? Haha!

Started this blog off. But it was still hard work!

Wee-wees seemed to be dying down, they were getting less frequent for sure?

Time to get the ablutions done. And what an annoying session this was. The dang right-hand fingers were electrifying-dancing more than ever, just when I was shaving. Somehow or other, I managed without cutting myself. 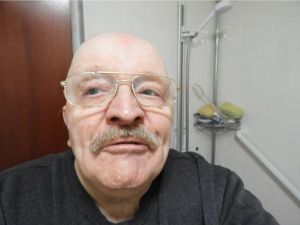 the dancing-fingers kept on and continued to give me bother. I dropped the toothbrush (that was a good one, I still haven’t found where it went, and I had to use another one?). The eye-drop bottle was also dropped, well it shot out of my pestering fingers hand really, and via the sink, WC, wall, cabinet and the floor, rolled around the back of toilet into the hardest place there could be for me to retrieve it! The disposable razor shot out of my hand twice! The carbolic soap slipped and hit the wall on its way to plop into the toilet bowl!
Last but not least, of the Axonotmesis causing  Whoopsiedangleplops by any means… I dropped the bottle of Brute after-shave, and it landed on my corned toes with the elongated nails that are still awaiting being cut! Oh, the agony! I failed to appreciate the humorous side of things on this occasion.

In pain, weed-off and somewhat battered, I tackled the problem of getting dressed. A simple-enough operation for the majority of the population, but I am in with the 6% of older and frail folks who struggle, and boy did I have to moil all the way!

I banged my ankle when using the Sock-Glide. Hit my elbow on the edge of the door edge. Clouted the back of my head when getting the jumper on. A bit of a mystery even to me, how I managed to do this. Getting the Ankle-Support straps on, was one hell of a struggle, but I felt so proud of myself once it was fitted, I went into Smug-Mode!

The pins had lost a bit of fluid retention. The

knees were not so gnarled either. But some new papsules in number were appearing again now. And one leg was a little larger than the other.

I got the shoes on, but when I stood up, the feet were in just too much pain with the strapping wearing on the toes. Taking off the ankle-Support was not precisely pain-free, either. The short-lived Smug-Mode was cancelled! To be replaced with the Dismally, Depressed – Discouraged – Doleful – Depths-Mode was adopted! Damned close to feeling sorry for myself, now! That won’t do!

Then I got the hand washing done. Got one t-shirt not dried from yesterday on the airer. Then washed and started to dry a pair of socks, a thick jumper, and a woolly-bob-hat. I’m enjoying doing this each day, it keeps me active to a degree when I’m not feeling too bright.

I was slightly cheered, when I remembered the Saturday morning out-of-date cheap food sale was on in the Nottingham City Homes, Winwood Heights Flats, and Administration shed for the Generalleutnantess Wardens Temporary HQ, Emergency Toilet, Sarcasm & Insult distribution area, Tenants Socialisation Shed. Rumourmongering Clinic. Telling Inchcock off Zone, Things like crockery and pottery to be stolen from, and residents shed. So, I took some chocolate nougat and a mandarin dessert for them in the trolley, and a recycling bag down with me on the way to the hut. I dropped the bag next to the caretaker’s door. 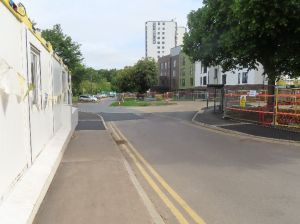 I limped along, with the pains and injuries from the ablution session still sore. Hehehe! Arrived at the shed, and turned to take this picture of Windwood Heights, without any lorries, vans or worked; it being a Saturday.

Also, the distinguished, well-mannered, residents folks of Winwood Heights, now have an accessible footpath to use, at least this weekend we have anyway.

Only five people in the cabin when I arrived. I had the shakes and a bit of a dizzy-spell as I went inside. I put this down as the reason for my purchasing some Egyptian broccoli that was all seeds, and the 3-day out-of-date rock hard pack of potato cakes. I gave someone the chocolates and mandarins. I seem to remember doing a lot of talking?

No doubt, the dizzy and shakes combined, had put-me-off balance a smidge. Once outside and gently walking back to Woodthorpe Court along Chestnut Walk, I realised I had bought some broccoli and the hard potato cakes. But cannot recall doing so, although I remember seeing them on sale. Angela and Roy were walking in the opposite direction, I think I asked them if they wanted the food, but they wisely declined. Hehe! 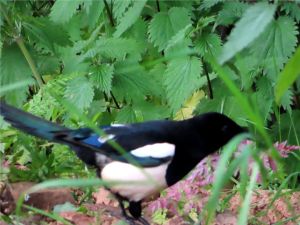 I tried to get a decent shot of some magpies in the shrubbery as I walked along the rubbish-strewn footpath.

This first shot made me suddenly aware that I had bought, or been sold, the Canon camera X40, that did not have a view-finder fitted. Bad that, with me missing the fact. I felt a right Charlie actually!

Then another bird came down to join its mate on the floor. I patiently waited so long to get a good picture.

Later, when I got the picture on the computer, this on the right is what I’d taken?

Either the magpies were like lightning, or I was not adequately recovered from the earlier funny turn properly? Haha!

I just got the lens through the wire fencing to take this photo of the linking passageway between Woodthorpe Court and Winwood Courts. Not operational yet of course, but it looks good and airy, and will keep us old uns indoors in the rain?

Sat beyond the trolley, was the most-appealing long-haired grey cat. Just sat apparently calmy looking at me. I’d have sworn blind I had taken a shot of the old grey cat in the picture, too!

I was feeling a smidge disorientated, I think. I got in the flat foyer and dropped the potato cakes and broccoli on the table for someone to try if they liked.

Back up to the flat. The wee-wees had changed to the SSDWW (Short-Sensationless-Dribbling-Wee-Wee style.

I got the lethal new kitchen windows open and tried out the zoom on the new view-finderless camera. I was pretty pleased with it. I’d have felt even better if I wasn’t feeling so rough at the moment. The Canon save images in IMG format, the Nikon as P, and the Lumix as DSGN. It all gets me confused even further than I am already!

Got the computer on, to the sounds of taps, knock and the odd bag from above. I heard them with the hearing-aids out.

I’d got some really tiny new-potatoes in the slow-cooker earlier, about five hours ago, and they were still hard, so I turned the machine to a high setting. I think this crock-pot not cooking very fast is the reason I got the other new one, that fell to pieces the other day. I can’t win, can I? Huh!

I spent about three hours on this update. The jumping fingers stayed that way all the time, so progress was not good.

I went to put the oven for the sweet and sour ready-made wheel, wheel? I meant a meal. (I’m losing it now! Proof of my excellent phlyarologist capabilities, Haha!) And added some orange peppers, I’ll add the potatoes if ever they cook, later. The noise from above had stopped, then I heard a commotion that seemed to be coming from the door. Went to investigate, and found a letter had been posted. 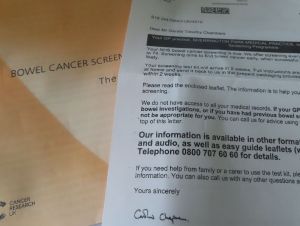 It was from the NHS concerning Bowel Cancer Screening.

The screening kit is to arrive in two weeks. I think I’ve had them before.

Feeling very tired now. So I’ll get the nosh cooking I reckon.

Got the sweet & sour with extra sauce, and the potatoes added, in a tray in the oven. Set timer for 35 minutes, then I can add the sourdough baguettes to it, and they should both be ready at the same time. Fingers crossed.

Feeling a bit perkier now; no more dizzies or shakes for over an hour now. Things are looking up.

I got the nosh prepared and served up.

I shall not be trying this Sweet & Sour chicken ready-meal again. I added the mini-potatoes and baked (heated-up) a sourdough baguette to soak up the juices, which were fine. The pineapple pieces, which I am not supposed to eat, were rock-hard. So I avoided eating them after one bite, this was not a bad thing. There was no sour taste involved, it was all sweet! Flavour-rating 2.5/10. But the baguette was tasty!

But for anyone that likes dry, stringy chicken pieces and sickly sweet sauce, with granite-like pineapple pieces, these Sharwoods meals can be bought from Morrisons. They’ll be ideal for you.

Washed and got settled in the £300 second-hand recliner, and put the TV on. It took ages, but eventually I nodded-off – must have needed it, cause I slept straight through for five-hours.