Not really, but I thought it funny. Sorry!

03:40hrs: Once again, I woke in auto-mode. Not very much enthusiasm was within me, and I was up getting the stick and on the way to the kitchen, without much difficulty, thoughts, or desire.

But I came back to mind-activity mode, as I veered to my right (as usual), and clouted my shoulder against the kitchenette door. I silently swore! I knocked kitchen walking stick and picker-upperer from the top pelmet and bent to retrieve them, and had a visit from Dizzy Dennis! I sore some more! Now reality dawned!

I rehung the stick and picker and took a few moments to steady myself. Then got the kettle turned on, and opened the light & view-blocking window, to take two snaps of the morning sky view. They were not very good. There was little wind when I opened the window, though, and ‘The Hum’ wasn’t so loud as it usually is?

As I got the Health Check things out of the medical cupboard, I might have known, or at least have guessed, with my clumsily knocking into the door, Shuddering-Shoulder-Shirley kicked off. It was a miracle that I didn’t have the sphygmomanometer in my hand at the time, but I still dropped the thermometer and armband. Thankfully the temporal artery thermometer even worked! Phew! Mind you, I got a bit dizzy picking them up again, and the picker upperer as only five feet away that I should have used! Dunk-headed-Nebbish!

Not surprisingly, the SYS was higher now, up to 63. Had I took it before, or if I hadn’t made such a clumsy job of getting into the kitchen, it would have been lower, I’m sure. Tsk! Note the blurry photograph?

I carried out the diurnally need, to sort out

the three similar-looking tablets, to remove the Furesomide, hoping I took the right one out, and not a beta-blocker or Codeine 60g! Thank you, Carrington Pharmacy, 343-345 Mansfield Rd, Carrington, Nottingham NG5 2DA, Telephone number: 0115 960 5453, just up from the Lidl store, for letting me down again!

I determined that I would calm down and concentrate on the next job in hand. Updating the Saturday blog and making a new template. I was seriously annoyed with, and blamed myself for the earlier cock-ups!

But my plans soon had to be changed, after I’d made the brew of Glengettie tea, I had to hobble-off precariously, to the wet room and make use of the Porcelain Throne. I limped to the Throne, and I monopolised it for ages!

A sad case of a Start-stop and wait in some degree of pain, for further progress situation. The innards were back in complete control of evacuation progress. I tarried for ages. Despite the near agony, I managed to concentrate on the crossword puzzle, and did very well at it, got at least six clues done! Smug-Mode-Assumed & Ratified!

I washed the dandies and returned to the kitchen. I found that with all the time the Porcelain Throne duties had taken me, the tea had gone cold. So I made another mug, and took two Senna tablets! A lovely blue tinge to the morning view, now as it gets a little lighter.

I pressed on at long last, with the updating of the sadly taciturn, talkless Saturday post. It was a long haul job. Not because of Shuddering-Shoulder-Shirley, Nicodemus’s neurotransmitter failures or Sccades-Sandra, but sheer lack of concentration on my behalf. My distrait distractedness was taking over, my frets, concerns, worries etc. were coming to my mind repeatedly. Thus the progress on the blogging front was pathetically slow! 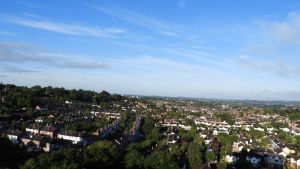 Eventually, I did get the update finished and posted off to WordPress. But it was hard headwork for me this morning. Went to make a brew of Gengettie Gold, and managed to appreciate the beauty of the late morning view, still tinted with blue! Hehe!

Back to what should have been a pleasure, but was today a grind, blogging. Emailed the links. Then on the WordPress reader, some great photos on their today. Then on Facebooking catch-up. Got than done. Time is passing very quickly. 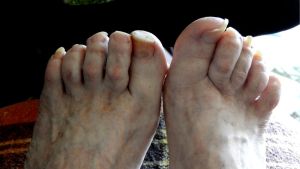 The poor tootsies and toes were in a bit of a state.

Better get the ablutions done. They went really well today! Only the one cut shaving, and fair enough a few dropsies. But no dizzies, knocking into anything or toe stubbings!

Doing well, drying off, and took the towel to the airer-heater, and heard the mobile ringing. It had to be Pete or Jane, their timing is atrocious, but don’t let them know I said this. Hehehe!  It was Jane, bless her cotton socks. I took the mobile back with me

into the wetroom to continue with getting dressed and do the medicationing and freshening up. But it was impossible with only one hand, so I asked her to ring back later, which she agreed on.

I was then in a rush, to get out before she rang back on the landline. And I missed some medicationing off, so must get it done later, but with Josie’s meal to do, in between talking to Jane, it was not looking good.

I prepped some more of the food cooking and got to the computer near the landline.

Jane called, and we had a jolly good natter, although a difficult one, I had to keep asking Jane to repeat herself, crackly line, breaking up. She told be Pete was due in the hospital ion the morning, Haematology Dep’t and it would be a long session for the lad. She mentioned other stuff of interest, and we had a laugh or two. I wished Pete all the best, and we agreed that the odds for me getting the feet done tomorrow at the St Anns clinic, were not good. Hehe! I wished her and Pete, all the best.

I stayed on the line too long and then had to nip-smartishly to get the meal done for Josie. All delivered dead on time, again. Josie looked happy with it.

I cleaned up from Josie’s cooking, then got my nosh sorted out. PHOTO.

After eating the meal, I did my set of washing up, and used a small plastic disposable plate, to save a bit on the next load of washing-up. Hehehe!

Then while clearing away, I noticed the Prawn tales use by date! And I misread the numbers – Panic! I thought they were out of date!

I plan to get my head down a while and then sort out the clobber for tomorrows Podiatrist visit at the Health Centre. Cash for the taxi, keys, bus pass to get home etc. I fear wearing socks is out of the question, shoes might even be too painful, so might go in the slippers and take shoes with me to change into – if, they will do the toes for me!

I got the fodder cooked and served up. Surimi mock pretend prawns. Crispy chips. Tomatoes, cheesy mash, battered fish, and canned garden peas. Followed by an apple pie, Vienna cake and mousses. I ate up the whole lot of it!

Got the pots washed for the third time today. Then got settled in search of sleep, slumber, or at least a little nod-off!

But, no, Herbert was banging about above. He might be making a life-size elephant or chipping away at a giant boulder to create a life-size model of a Mammoth. Hehehe!

So, still so early for everyone else, but beyond my head-down time. So I can’t complain. I had to get up and on the computer again. Which might prove to be a good idea. I’ll finish this post and make a start on Mondays. This will save me time in the morning, cause I’m going to be busy early sorting things out for the Health Centre, and will have little time for my beloved blogging.

Hello, Herberts off again. He might have chiselled to hard, and the Mammoth’s tail dropped off? Haha!