TFZers, but where are they?

Last night, try as I did, and I did, but I couldn’t get to sleep. So I got up, finished and posted off the blog. Nodded-off again! Yee-Haa! 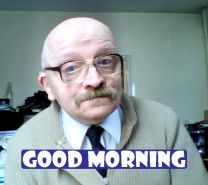 02:45hrs: I woke (three-often-interrupted-for-wee-wees hours) in need of a wee-wee, but not urgently. I sensed and felt around the ailments, wriggled a bit and tested the legs, arms, wrists, ankles and torso, to try and self-diagnose, the little blighter’s veracity this morning.

I soon discovered that DD (Duodenal Donald) and SSS (Shuddering-Shoulder-Shirley), (later on joined by Anne Gyna – badly), yesterdays agonies that were given to me, were both top-of-the-heap again, pain-wise.

But the search for a silver-lining revealed that Arthur Itis,  Reflux Roger, Cartilidge Cathy, Shaking Shaun and Saccades-Sandra and others, were seemingly in am empathetic mood with me! Bless ’em! So, as I tackled the mountainous task of heaving my crassulent, flabby, boing-boinging-stomached body from the clutches of the c1968 recliner, I adopted a kind-off; Hey-Ho!, attitude?

Having gone through the After-Stroke teams recommended balance-catching routine, the hobble to the wet room, was a struggle, but not for the usual reasons.  No straight loss of balance, no Dizzy Dennis, nor Arthur Itis problems! Just a difficulty with the misjudging of distances to my right-side. Had there been a CCTV in the flat, it would have reminded any viewer of Freddie Frinton and the Ministry of Funny walks! Hehehe! But, there was no going into anything or tumbles on the way to the wet room, and the need of the Porcelain Throne arose en route.

How can things with the innards change so often? I’d been sat down for a few seconds, and without any warning, the evacuation began. Ooh, argh! And all done! No mess, no bleeding at all! How so much came out in such a little time amazed me! A bit of discomfort, but no pain as such, either! A 1-1 draw, between Constipation Konrad and Diarorrea Duncan. And, one flush cleared the elephantine mass away, too! 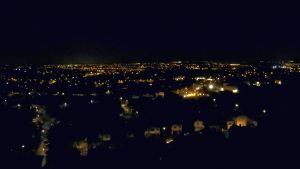 Anne Gyna was now taking over as Primo-Pain-Profferer, as I got in the kitchenette to make a brew. Got the kettle on and took this half-decent, semi-zoomed photograph, of the morning view, from the hard to get at to clean, light and view-blocking window.

Maed a mug of Glengettie tea, and into the main room to do the Health Checks and take the medications.

Anne Gyna was continuing to give me grief! I must ask the Doctor about this on Monday, or ring 111, but they only tell you to see your Doctor, which is not going to be easy. 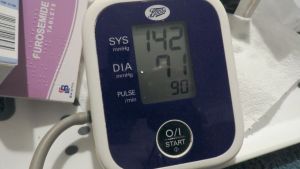 Got the sphygmomanometerisationing was done. The SYS was well down on yesterdays reading, at only 142! The pulse up a tad at 90, but I don’t think that’s a problem… I’ll ask Dr Google. Yep, okay! ‘Between 60 and 100 beats per minute (bpm)’

During the time since the Porcelain Throne visit, I’ve wee-wee’d eight times? Ah, well! I took the medications, with an extra Dioctyl® capsule, and Codeine 600g, but it isn’t helping ease Anne Gyna in the slightest, fed-up with this. But I reckon it did ease BPB later.

I made a start on this blog, in between several more SWSI (Sprinkly-Weak-Short-Itchy) wees.

Then went on CorelDraw, to do a few graphics for the diary-top.

Getting artwork from the web to amend, I found the latest Coronavirus figures for Nottinghamshire.

Blimey, Anne Gyna is giving me some high-quality hurtful stabbings! I had a wee-wee, and ent to make another brew, Thompsons Punjana this time. I made up some small waste bags while the kettle boiled, and put them in the box, and onto the three-wheeled walker, ready to go down with some others later on.

Back to CorelDrawing. I ended up sorting some files out that I’d got mixed up, but still haven’t got any graphics done – Humph!

The feet were humming a little, so I took a look at them. They were fluid-retentioning again, I think, and the nails getting longer than ever!

I got the ablutionalisationing done. Not too much bother, not the showering caused owt worth mentioning. Multi-dropsies and a crack on the back of the head, when I was getting back up after retrieving the shoer-gel bottle for the umpteenth time.

The dressing was a struggle, and the medicationalisationing went well enough.

Then I got the small waste bags added to and stacked them in the box on the trolley-walker guide.

As I was doing this, the landline flashed and rang. It was Brother in law, Pete. We had a good chinwag. I was updated, on how Pete’s radiation treatments for his cancer had gone.

Next week he goes back for a cat-scan again,

to have a look at how things are reacting the treatment he’s had. Fingers crossed! I told him Tim and Billumski on WordPress sent there best wishes.

Cheered him up a bit, I think!

Back to the rubbish sorting. Out and along by the lift lobby to the waste room chute.

Bit of a farce getting into the room. A bigger struggle to get the bags into the tiny opening. Trapped the finger (the same one as yesterday) in the heavy metal lid.
A further kerfuffle getting the trolley out of the chute-room, trapped my ankle against the door and wheels of the guide. Well, it stops me getting bored, dunnit! Hahaha!

I took this photograph from the window near the waste-room door. Some Crows were flying about, but by the time I’d got the camera out they were long gone.

I even managed another moment to have a hullabaloo going back to the flat. A cracking well aimed for maximum pain, toe-stubbing, against the trolley!

I think I said ‘Well, fancy that!’ at the time.

I returned back to the flat and got on with doing Josie’s nosh. 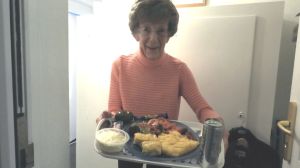 I felt a little unexpectedly irritable with myself while doing the food prepping, but buggered if I know why? Got the meal delivered dead-on time again, midday! This is not the real meal delivered today, I forgot to p[picture it, and used an old one – Cheat!

Things went pear-shaped then! I had to go for another Porcelain Throne visit. So much blood came out, everything else of the visit was unimportant and forgettable. So I forgot it! I spent a good while cleaning up and medication, during which I found that both Little Inchies Fungal Lesion and Harold’s Haemorrhoids were bleeding! This actually eased the mind, at least I know why all that flood of blood escaped. Not feeling so good, now.

It made the PPs look pretty in red and white, though. Hahaha!

All calmed down now, I had a very late brekkers of the left-over cheesy potatoes with chives, sea salt, Leicester cheese and butter, from Josie’s nosh. Jolly good they tasted too!

BPB and DD were both still in attendance, and I was trying to do some graphicalisationing, but it was a hard slog with the concentration all shot.

And early head down was demanded. So I got on with making the main meal.

I added some tomatoes and peas to the Chilli-Con-Carne in the saucepan and made sure I checked it every few minutes, in between doing a Thoughts graphic for later use.

Put some part-baked rolls into the oven, and turned off Computer Katie.

Made up the evening pots of medications and put it on the ottoman, to take while eating. (Unfortunately, I failed to do so, but corrected this later when I woke up).

As you can see, I didn’t manage to eat all of the Chilli-Con-Carne meal, all as part of my self, and Doctor-imposed new diet. (Ahem!)

As I got down to watch something on TV, erm… whatever it was, Anne Gyna suddenly stopped her day-long marathon of giving me grief, it was like an Angel turning off a tap! Although Duodenal Donald and Back-Pain-Brenda were continuing with their assault, the relief at Anne Gyna retreating from the battle was almost frabjous, and appreciated!

Ah, yes, gorrit! It was an episode of Hell’s Kitchen that I wanted to watch, with Gordon… Hang on, that’s wrong… Erm,  ah, Kitchen Nightmare. The brain’s going on one of its ‘Work-to-Rule’ episodes, again.

I watched the first part, and when the adverts came on, I thought I’ll nip through and get the pots in the sink to soak, which I did. It took me that long to get up, simply put the cutlery, dish and tray in the sink, and get back, and the next part of the programme had started. And we all know how long the Freeview commercial breaks can last! Hehehe!

At the second commercial break, I remember seeing the evening medications still in the plastic pot on the ottoman – and vaguely thinking, I’ll take them now… and I fell asleep!

6 thoughts on “Inchcocksi – Sunday 22nd November 2020: Ailments in a bad mood, and I did a lot of wittering”