Spent the night trying to get to sleep without any luck at all?

Gave up and made a cuppa and took me medications – then fell asleep!

Had to rush about a bit (Well I say rush… hobble rapidly is more like it) to get things ready for me visit to Sister Jane, she is not one to cross by being late believe me!

I caught the bus into town to save time being as I had got a little behind this morning (They can’t touch me for it… can they?).

I got off at the Victoria bus station and took a photo of the Victoria flats (Apartments) and the sky that held clouds that seemed to be travelling at great speeds across the sky, I half expected the picture to come out blurred. Hehe!

I walked through the bus-station and into the top-level of the shops – sneaking some seeds to the pigeons on my way through – and I made for the Menkind Shop, after a look around I chose some pressies for Brother-in-law Pete that I thought he and Sister Jane would both like.

I opted for these three here like wot I photographicalised.

They both seemed to appreciate the humour in the first two, and the novelty and practicality of the ‘pen’.

I made me way in the wind and rain to the bus-stop for the West Bridgford buses and caught one quickly. Just avoiding being clouted by a cyclist on the pavement as I joined the queue – Git!

The bus was well crammed with passengers and when it came time for me get off – the left knee was restrained by Arthur Itis and I missed the bus-stop. Tsk!

Hey-ho, not too much rain when I alighted and started the short 10 minute walk to Jane’s posh house.

Mind you some of the pavements where no sun had got to needed a bit of careful manoeuvring along, due to the reattainment of the earlier snow making them a little slippery in places and the knee still not to enthusiastic about being used.

I arrived at their dwelling and was greeted and was given a cup of tea – I mentioned it was a bit weak and Pete said it was the tea-bags I’d recommended for them because they were strong ones, Glengettie brand. I said I couldn’t believe it it was so weak. With a smile Pete added “Probably because he’s made three cups with one tea-bag! Tight wad! Hehe.

I got Pete to take some head shots of me so I could doctor and use them later in me graphics, oh and one of me and Sister Jane to put on Facebook for the TFZ gals and guys.

When Jane viewed the photo on the camera she said: 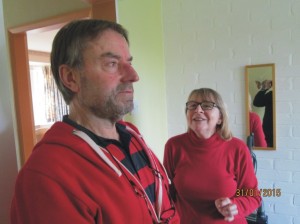 Then I took one of Jane and Pete that I thought came out alright.

They were wearing red because they were going to the Nottingham Forest match against Millwall later – that is why I had to visit them earlier than usual. 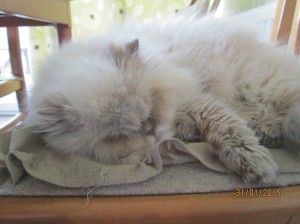 Oh, I almost forgot, I took a photograph of Fooey – in his usual position in his favourite chair – sleeping!

He’s getting on now, like all of us and I have always felt an affinity with him – he’s old, friendly, poorly, deaf and pretty ugly bless him.

We had a natter for a while (Jane Pete and me that is, Fooey doesn’t yer know… Hehe) and then I walked to the bus-stop with Pete who was going to the shops and I caught a bus into Nottingham. 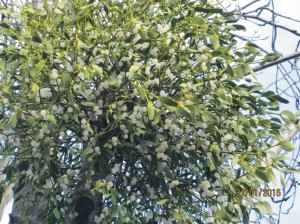 As we walked into West Bridgford centre Pete pointed out some Mistletoe growing high up in a tree. So unusual I took a photograph of it from under the tree. Never seen that before?

Then on to the bus-stop where Pete carried on to do his shopping.

with me bus-pass, particularly with the knees playing up so.

As I got off the bus in town at an early stop to have a little walk around, the wind was getting stronger although it was not a cold one.

I wandered around for a while and called into an Asian store on Goosegate got some seaweed and blackbean sauce.

As I came out of the store I noticed several vehicles parked on the double yellow lines near the DG Cabs HQ.

As I limped towards the bus-stop for the Carrington buses, I espied another dangerous cyclist-swine crossing the traffic lights and onto the pavement – 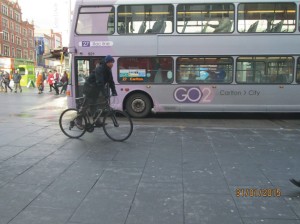 By the way, when I was in the MenKind shop – I saw they were selling although they were out of stock today and were unsure when or if they would get any more – A pen camera! Must look again there, might get one to record the naughty cyclists on Nottingham pavements?

Back in Carrington I remembered I’d forgotten to make an appointment with the GP. Tsk!

Popped in the Co-op to get some bread. On the shuffle back to the dump I sneaked the pigeons who massed around me some seeds.

Got in and WC’d and the rumbling continued from me innards, but Arthur Itis was more bothersome today, and the rear-end piles were bleeding again. Still, yer don’t like to complain do yers?

Decided to have braised beef and instant potatoes for me nosh… ended up having beef sandwiches and microwave chips.

So tired now, hope for some sleep tonight.