I didn’t get to sleep for yonks last night despite me exhausting walk wot I took to the Arboretum yesterday.

No tablets to take due to me error in taking me morning lot last night… confusing meself now.

Laptop on to finish and post yesterdays Diary and started this one.

Thought through me tasks for the day:

QMC INR level tests at the haematology department. Must get the nibbles packed up for the nurses, Record-card already in crossword book in bag.

Meet Pete at noon at his bus-stop.

Get back and sort things for the Nottingham Hospice Charity Shop and take them in.

Got myself cleaned, medicated and polished and set off for the walk into town.

Oh boy shiver me timbers and cor blimey governor was it raining? Is the Pope a atholic? It was belting down!

I had a ponder for a while: Should I get a bus into town and pay £2.50 for the pleasure? (It was well too early to use me pensioners bus-pass). Or should I risk walking and hope the rain eases a bit?

I decided to risk it as well as keeping Arthur Itis’s joints moving thought it a good idea. 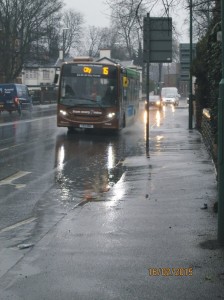 I was well wet within a few hundred yards of me walk – the rain had started to fill me bag, (Luckily the nurses nibbles were well wrapped up in an Icleland carrier bag) me new shoes were leaking, and halfway up the hill the floodwater was unavoidable by the buses and several unpleasant drenchings took place.

I just hoped that the rain would not get through me new coat into me mobile phone and/or camera.

Out of desperation I used me Pound Shop umbrella, that dripped (Obviously) into me bag, down me already soaked legs and me shoes like.

I squelched on into town and caught a bus out to the hospital within minutes.

Getting from that bus into the hospital (About 400yds) through the torrent of rain that decided to come down as I got off the bus was not nice. I got in though the entrance to the foyer area and had to shake off as much rain as I could before going in proper, as did many others.

Me poor old tweed Andy-Cap was absolutely drenched and I decided not to take it off cause I knew from experience that putting it back on again would be farcical.

I got to the haematology and only one person was there and I was in, gave them their nibbles, blood taken and out in a matter of ten minutes tops.

The rain had eased a lot when I came out and crossed over the road to catch a bus into town to meet Pete.

When I arrived in town I realised that it was far too early to wait for Pete in the rain and rang him to see if he could come any earlier – as I didn’t fancy going back to the bomb-site then coming out again to get re-soaked. He said no, he’d see me at the agreed time and I should go in a cafe for a cuppa and wait.

Fair enough I said. But no way was I gong into a cafe for a cup of so called tea… have you ever found one that served tea that didn’t taste like warm brown distilled water? 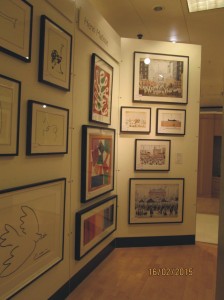 I was outside Jessops department store so thought I’d go in and have a wander around in the dry and warmth. I went up to the top floor and started working me way down nosing at things and pretending I could afford them like. 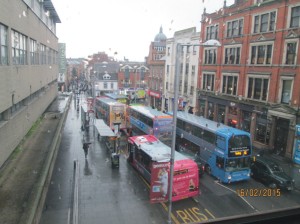 Pete rang back to say he was on his way and would be there in fifteen minutes, then I had find me way out of the store? It took a while… Tsk!

right of the crossing.

I think they show the weather as it really was although the rain had eased off by then a bit.

Got out into Victoria shopping mall and made me way to the exit and passing the Thornton’s store I espied some chocolate shaped like a Champagne bottle at £5 a go and thought sister Jane would like one for Easter maybe, so I went in and bought on. The young chap asked what I’d like writing on it… I must have given him a confused look and he repeated himself slowly. Then it dawned that they write a message of one’s choice on it in white chocolate… I got there in the end (Attracting the now much used “Poor old devil” look from him. I asked him to put Jane and some kisses which amused him but he had the nous and manners to turn around before laughing. (The tell-tale sign was his shoulders going up and down yer know… hehehe)

I met Pete and he said Jane wanted to know where the shop was that got the seasoned roasted seaweed for her, so we had a poddle around for a bit. We passed where the 19 year old lad had been murdered and there were hundreds of floral tributes on the lampposts. So very sad I decided not to take a photo out of respect.

The Chinese shop on Goose Gate was an Alladins Cave to Pete. We got some seaweed and then went to another Asian shop around the corner – but what a difference, mouse droppings, out-of-date stuff on sale and staff that looked and leered like they were tongue members.

I left Pete at his bus-stop but not before he took a photo with me camera of me with a wet barren atmosphericalisional background.

I poddled to me bus stop and caught one back to Carrington, calling in the public gents on the way.

Back in Carrington I popped into the Co-op and got some bread-thins then hobbled in the rain to the dump.

WC’d, kettle on, laptop internet on, made a flask of good strong tea and set about creating this diary.

Too late to take the stuff to the hospice… well I mean too wet really. 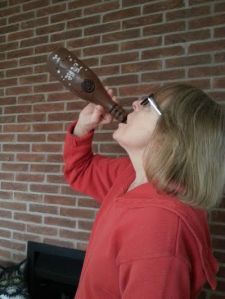 During which I realised I’d not taken a photo of Jane’s Champagne bottle that I meant to earlier. Huh! So I rang Pete and asked him to take one and email it to me please.

He did bless him, he took two: Here they are.

Notice the brickwork in their front room, spot on and classy – yer can see Pete was a brick-layer can’t you.