Difficulty in getting to sleep again last night – but I managed eventually, then when I woke up it was with a jump and me mind active and racing raving away?

“Must remember to listen for the bin-men so I can get the bins put away before someone steals one again “- “Must keep an eye out for the INR test results” – “Must get to the Nottingham Hospice shop today” – “Must get some bananas” – “Must call at the dentists” – “Must get me Interview post started for me blog” – “Must put extra cream on me piles today” – “Must delete some fonts from the laptop”… and on and on for a couple of minutes none stop.

I thought my mind would explode. 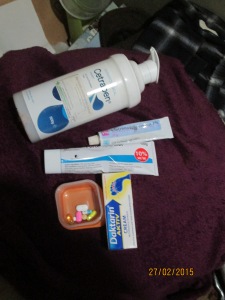 It settled down to its normal moronic vacuity eventually.

Made a cuppa and took my medications and applied me creams.

The innards seemed easier this morning again. Crossed fingers on that situation.

Damned cold this morning. Just on freezing according to Google. That’ll be nice for walking after all the rain yesterday. Must take care to avoid any Whoopsiedangleplops today if I do get out.

Did a bit of Facebooking then tried to do some graphics in Coreldraw9 (Not yet having mastered Serif x6). Coreldraw9 crashed so I tried Serif x6 and that crashed! Really pee’s off now!

Went down to make another cuppa and – it happened – another Whoopsiedangleplop suffered!

There I was taking me time and using the hand-rail going down the stairs and Arthur Itis gave me a rather nasty painful twinge in me right knee.

Of course I went down the last few steps in a rather unseemly and swift fashion. 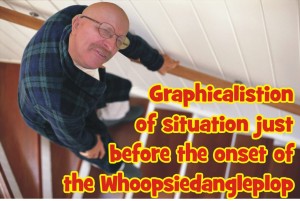 Amazingly only the knees were painful afterwards. The bruised arms and ribs were not too bothersome at all. This pleased me so much I made a graphic to celebrate me good fortune – mind you I suppose summat could develop later… hmm?

Corel and Serif draw both okay for a short while then crashing still. Gave up again.

Spit un polished missen and got ready fer me outing.

As I left the bomb-site I took a photo of the sky – no rain forecast for today (But plenty for tomorrow) so decided to catch the us into Arnold and walk back.

The I thought no… the knees might be bad when I come back and I’ll be carrying things… by then I was on the bus, so got off a couple of stops further on and decided to walk into Arnold.

On up through the estate noticing how pretty the sky was especially compared to how it looked yesterday – Dark, dank and depressing, as I expect it to look tomorrow as well according to the meteorological office.

Wet left and up the hill. Halfway up and where it bends to the left a nice view although a little distant opened up to my tight of the houses giving an idea of the size of the estate.

Mind you, it’s not as large as the Clifton Estate.

Carried on up then down the hill into Arnold proper and turned right into the shopping area.

I window-shopped my way along and came to Arnold market – never have I seen a sadder one.

The ribs where I Whoopsiedangleplopped earlier were starting to give me a bit of gip now.

of some… well I don’t know what you call them, htey were charms to put on bracelets like.

To show the TFZ gals.

Then I called into Fultons Foods shop in the vain hope that they might have got some of me blackcurrant lollies back in stock but no.

So I had a look around for any bargains and ended up getting a few bits.

The Walker’s crisps were Cheddar cheese and Bacon flavour.

Walked over the road and waited for a bus to take me back to Carrington.

Some young women in the queue were talking between themselves and I turned me hearing aids up to full volume and had an ear-wigging session.

I have to report that the one with a nose and three lip rings who was smoking roll-ups dropping the ash on her baby in the pram has put a claim in with the Social Security for a new 3-piece suite.

The one with the tattoos on her neck and face who would scare the life out of Boris Karloff is going drinking tonight at the Bell Inn to cheer herself up because she is pregnant again and her boyfriend has scarped.

The the route back to the flea-pit the bus stopped dropping someone off and I took a photo of the Old Alms dwellings.

I wondered if they were still for the old folk?

Some mountainous steps to climb to get in em?

I rang the bell, I know I did cause I can’t hear it when it buzzes so look at the ‘Bus Stopping’ sign that illuminates when you press it to make sure – the bus-driveress didn’t stop at first then noticed me lurking behind her and did stop – tutted and let me off.

I saw the famously dangerous but petite mobility scooter driver coming my way – and crossed the road to avoid encouraging her to catch me ankles again. Luckily there was not traffic about.

I limped back to the hoppit, fed the pigeons on me way, got in and just made it to the porcelain in time.

Another pile of unsolicited mail waited for me.

Today they were from:

‘RIAS Insurance’: Informing me I could get an 80% No Claims Discount with them.

‘The Nottingham Building Society’: Advising me They can tailor a marketing plan for me and my home across branch, press and internet!

NHS Anticoagulant Therapy Record and Dose Advisement’: Increasing my dosage again informing me that my level was now 2.1. (Target 3.5) And giving me an appointment again for next Monday.