0140hrs: I stirred differently this morning, slowly. The reluctant to open eye-lids tentatively fluttered into an open position. I waited a few moments for the brain to catch up and assume a status of readiness for activity. It took a few minutes longer, but it got there. The thoughts bouncing about in my mind were depressing, tristiloquy-like ridden. Luckily, they were forgotten about and abandoned when the overwhelming demand for the Porcelain Throne arrived.

I fought the pain from Hippy Hilda and Arthur Itis, disentangling my aching limbs and body from the £300 second-hand recliner, and into the wet room. Only to find there were no evacuation materials to rid me of, just splurting winds.

I spotted the note I’d left to remind me of the Dentist Appointment at 0945hrs this morning.

I’d added about doing the laundry onto it.

0158hrs: I gathered the washing bag and accoutrements and made my way down to the laundry room.

Only the one lift was working, number one that holds the Wachlino – The Alien Blob. That has been in there resisting all attempts to kill and clean it up, for four weeks now. I’d

got the camera with me and decided to do an updated photograph of the little creature. When I got inside the elevator, I took a photo to use later in making a graphicalisation.

about to give birth?

Got the washer going and back up to the flat.

Made a start on finalising yesterdays post for half an hour or so, and it was time to go down to move the stuff into the dryer. 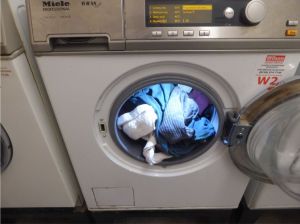 I must say, I was pleased with how the oven thingy, mitt or whatever it is called, came out nice and clean despite its thickness.

Turned the dryer on and then back up in the lift.

Well, then I noticed something of further interest on the floor near the corner in the shadows under the fold-up seat!

Yes indeed – A new Alien Omeaba? A lot fresher looking than the old one now. Another Watchelino Mark2!

Got back up and set about making a graphic for a bit of fun.

Got this done, then finalised the Thursday chronicle and started this one off for an hour or so.

Then back down to clean the machines and collect the laundry.

Folded the stuff and got it into the bag. Then wiped the machines and cleaned the filters. Had a spray around with the freshener. Pleased to report that I had no Whoopsiedangleplops or Accifauxpas down there this morning.

Checked Email got a message from Jenny, thanking me for the flowers. She used the Facebook thing, but my computer freezes when I use it so I could not reply.

Time to get the ablutions done, and readied for the dentist visit. Oh, I do hope they can sort it today.

Sorted the waste bags and took them to the rubbish chute.

Got ready for the dentist and set off. Both lifts were operating now, but I got in number one and took the opportunity to get some better shots of the ‘New Alien Blob’. I forced the flash on the camera to work, and the results were better this time. Made this graphic later when I got back home.

Out the foyer doors and up the gravel hill into the park, left down to Mansfield Road.

I had nasty Dizzy Dennis attack as I neared the gates. Had to stop near a bench and hold onto it. Not all bad though, cause it gave me the chance to watch dogs playing with their owner and I spotted this insect, whatever it is on the top back of the seat.

Dizzy only bothered me for about five minutes, and then I set off slowly hobbling to the dentist place.

Fingers crossed and hoping for the best, I entered and bravely bothered the Obergefrieteress receptionists. Took a seat and got the crossword book out. A young assistant came to fetch me half an hour so later and carried the bag for me as I tackled the steep stairs to the treatment room. The Dentist needed to see the actual INR blood level figure from the Deep Vein Thrombosis Clinic, which I didn’t have of course. Not that it would have helped me get my teeth done, because the level was only 1.5 on it, and the dentist would not do any work until it was 2.5 to 3,5 anyway,  as she explained. So, now I have to wait until next Tuesday to have a blood test. Then wait until the DVT record comes to me. Then it has to be in range. Then I have to go to the surgery within 24hrs and try to get an appointment within the next 24 hours of visiting them and informing them. But they cannot guarantee me one. The dentist came down with me to speak to the receptionists about the situation. But even she got dirty looks from the Commandantess receptionist; I just got ignored.

So, what chance have I got of ever getting the teeth done? I thanked them and left with a despondent, dejected air about me.

Outside, just about coped with the two steep steps down to the sidewalk and things took a turn for the worse for me as a blooming Nottingham Pavement Cyclist came to close to me for comfort as he sped by.

Limped down to the Wilko store and got some duck food, bleach and fabric softener.

Back up the hill, still feeling depressed. Roy and Doris were at the bus stop, and we had a little chinwag and laughed as we waited. Not an easy thing to do when all three of us are hard of hearing! Hahaha!

Got in and prepped th things for a meal of the day.

Smoked Basi fish fillets, garden peas, orange flavoured beetroot and three small potatoes boiled. I’m goingto try some of the Fish Sauce with it, see if I like it.

Onto the computer to update this diary.

Quick check on the Emails.

Jenny rang me thanked me for her flowers and we had a nice chinwag. She told me to ring her when I needed ny help with moving things when the upgrade started. So kind of her.

Nosh eaten, but I took a photo of it without a cars in th e camera, and don’t know how to get it off the camera?

Flaked out so early after doing Health Checks and taking medications.