0105hrs: This mornings expergefaction brought with it, confusion. Why was I half hanging out of the £300 second-hand recliner, that had mysteriously moved a few inches away from the old armchair next to it? The stomach was growling, Hippy Hilda horrendously painful, chest pangs and twinges. Feeling a little Dizzy Dennis visitation, one sock on – the other later found in the waste bin. Limbs aching. Lower back, shoulders and legs and Duodenal Donald dementedly angry with me. Yet, no Anne Gyna, Reflux Roger, Arthur Itis or Hernia Henry hassle?

I rearranged my semi-mangled limbs into a semblance of where they should be. I could remember no dreams whatever? Then a new pain started the moment I tried to move out of the chair, right chest, half-way down the ribs. I put this down to the contorted physical position I’d gotten myself into overnight.

I left the disarranged mess in the front room and limped off to the kitchen, in a bit of a haze. Did the Health Checks and took the medications – found I’d missed the last night ones, so just took a Magnesium, Warfarin and Simvastatin from them, with the morning ones, to avoid repetition.

On the computer to u

pdate the Health log with last weeks results. Which came out only a little different tot he previous weeks, although the Sys and Dia a few points up.

Then did this morning’s checks.

Responded to the rumbling innards and called at the Porcelain Throne. I think that Trotsky Terence is trying to fight back at Constipation Conrad again now. Resulting in a half-half session. Tsk! During which I had flash-back of a tiny bit of a dream I’d had, I was in London (I assumed) walking around the streets of Belvedere houses, chambers and bowls of natural body waste being thrown out of the upper windows, aimed at me. But the vision in my mind ceased within seconds?

On the computer to finish yesterdays blog off.

Made a mug of Breakfast Tea, then started this template going. The stomach still rumbling.

Went to the WordPress Reader.

0322hrs: Remembered I had the laundry to do. Assembled it and down and got it started.

Back up the lift and set the timer, and back on Facebooking.

The Notice Board had been prettified for the season of good-will.

Back to Facebooking again.

Half an hour later, returned to the laundry room to move the clothing from washer to dryer.

Some naughty pensioner had not cleaned out the filter on the drying machine.

Once more, back up in the elevator to the mini-apartment. CorelDraw used to start another TFZer graph 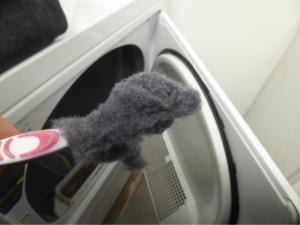 Down to collect the dried-laundry.

A lot of fluff came out of the filter afterwards.

Folded and collated the things and got them in 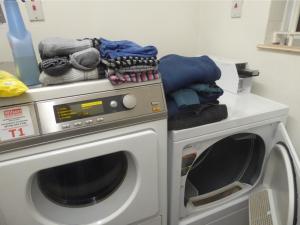 Wiped around and sprayed the covers and doors.

Then I popped outside to take a photograph, and found that it was warmer out there than it was in the flat upstairs?

Despite there being a bit of frost on some of the car windscreens.

Gathered the bag and went back up to dwellings.

Stored the togs away and checked the bag of goodies for Jane and Pete. Another load in the fridge I must not forget about when they arrive

WordPress was still not doing anything but let me write on it. Would not save? Had to turn everything off and start again. Luckily this did the trick, and it is working once more.

I got some nibbles, made another brew and watched some YouTube crash videos.

Took a photo of the turning-colourful sky, and check to see if there were any Parking Spaces, to let Pete know when I ring him later.

Got the ablutions tended to. Nice deep slow shower, not cuts while shaving, no bleeding from anywhere like rear-end or teggies’

Sorted the rubbish bags out and took them to the chute, and went down with some jars for the recycling bin. I noticed in the lift on the way down, it looked like some graffiti

had been cleaned off the wall?

I also spotted that they had put down some sand-salt outside. Bless the workers, very kindly indeed.

0900hrs: It actually appeared so much colder now, compared to what it felt at 0300hrs? Odd that. I’d thought I might have time to nop up to Aldi and get back in time for Jane and Pete, but if the hill is going to be icy, I decided to catch the bus up and walk home.

So I got ready and hobbled to the bus stop.

Arrived at the bus stop and had a chinwag and laugh with some other tenants. Dished out some chocolate coins. Two of them told me that the heaters do not work unless you have them all going?

I only rode for five bus stops up to the top of the hill. Said my farewells to the others and alighted the vehicle, and walked along Woodborough Road to the Aldi store.

The pavements were a bit dodgy with the ice en route, but I got there alright.

Got some cooked chicken legs, oven potatoes, part-baked baguettes and rolls to last over the break, vine tomatoes, a Melton Mowbray Pork Pie and a lemon curd yoghourt. I forgot to get the tinned tomatoes, though. Tsk!

Paid and left, walking along the top and down Winchester Street Hill towards the flats.

Very dicey manoeuvring over the ice as I descended the incline.

Hippy Hilda was the only hassle, but she was not in a good mood at all with me. By the time I approached the bock of flats, I was thinking about taking an extra pain-killer when I got indoors. Which I did. 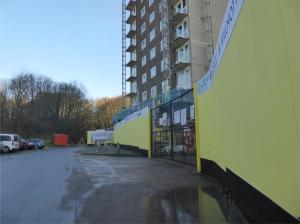 The standing water was still frozen near to the builders compound top gate.

Got in the apartment and put the food away.

Made a brew and onto the computer and updated this twallop.

The tea went cold, so I went to make another mug.

For a bit of fun, I took a picture of the parking outside below, and sent a copy to Janet, telling her there were two free spaces available. I thought it might amuse her and Pete, then again, just maybe not.

Opened Corel Draw, to start making some more funny page headers while I awaited their arrival.

Looked out and saw Jane & Pete arriving on site. I recorded this cause I might use it for blackmail at a later date:

When they got into the flat, I soon learnt, I should eat pasta, not bacon with the tomatoes in the pan, the kitchen was too full, the colour in the hall was the wrong one,  my spectacles that Pete used were not the right ones for him. My nose was running again, and the jumper I had on was the wrong colour for me. I’m only joking! Hehe!

Jane gave me a short coat that a friend who had passed away left. Nice and warm when I tried it on, right for summer or wearing in the flat on a cold night.

We exchanged stuff. Both had been to see another relative Mary earlier in the day (I think) and this bought guilt back to me a little. Mary’s husband had the same heart operation as I did, a week before me. And he passed away a week or so later. I took a lot of getting over that I should survive, and a family man with a beautiful wife, who I adored and kids that were more like friends had to die.

Chinwagged a lot, a few laughs along the way. Hippy Hilda was giving me a lot of pain, I think I hid it well, I didn’t want to bring down the rare light-heartedness that was prevalent, and I was enjoying.

Pete tried to download the photos he’d clandestinely taken to the computer. I got myself in a pickle trying to get the Wi-fi to pick them up, panicked and gave up. (Sad innit?)

They departed. I felt a little low. And as I was about to get the camera to take shots of their leaving from the kitchen window – an urgent call to the Porcelain Throne had to be responded to. Tsk!

Pasta Tomato sauce with mushrooms and bacon nosh. Enjoyed this. Put the dishes in the bowl to soak.

The energy soon drained from my grey-cells and body, and I got down in the £300 second-hand recliner to watch a Boon DVD episode.

Turned over to the TV after and drifted off into much-needed sleep. The phone rang, I managed to escape the recliner and get to the phone in time. Pete had found a way to send me the photographs he took on his new SmartPhone and had sent me them via Email.

I’ll get them sorted in the morning.