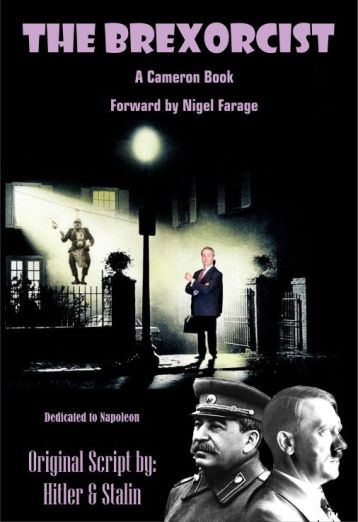 0024hrs: Woke and laid there a while, waiting for the brain to start its own pandiculating and join me. As it did, I sensed the warm wet worrying sensation from the lower regions. I dismounted nervously from the £300 second-hand recliner, perpendicularised myself and limped off to the wet room.

Oh dearie me! Matted and fresh blood this morning from the fungal lesion. I cleaned things but did not do any medicating, changed the PPs (Protection Pants) the medicationalising can wait until I do the shower and ablutions later.

Got the Health Checks tended to and took the medications. Computer put on and did last weeks record in Excel.

0230hrs: Made a brew, during which the call to the Porcelain Throne expeditiously arrived. I was so glad no CCTV cameras were running! As I had to run and get on the Throne with much haste and amusement.

I arrived in the nick-of-time, and as I plonked down, the lid slid sideways and trapped some… erm… flesh! The evacuation was slow, big and messy. A lot of relief when it ended, then the cleaning up. I bent down to try to make the seat more secure. All I achieved was to hit my head on the sink getting back up after failing to make any difference to the wandering lid! Changed the PPs again, cause the lesion had been bleeding too. Humph!

Made another mug of tea to replace the one that had gone cold, and collated the paperwork needed for my visit to the Council Mobility place. Hope I can find it, the map and internet were little help other than saying: Victoria Centre also has a mobility centre, operated by Nottingham City Council, located on Victoria Bus Station Travel Centre
York Street, Nottingham NG1 3EN. Level 1 of the White Zone Car Park? The centre site tells me it’s on Level 1 of the White Zone Car Park, Cairns Street? 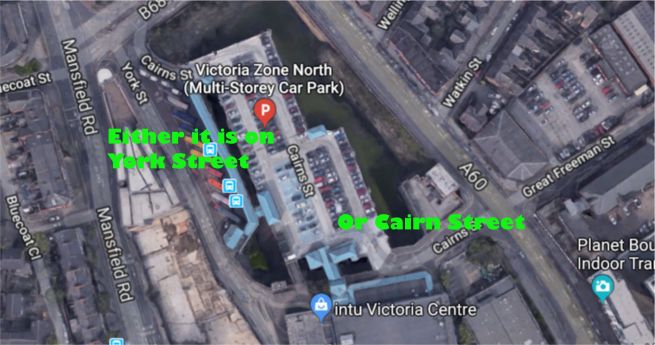 I’m going to have fun here today, I can tell! I’ll call at the Poundland shop as well, and ask if anyone had handed in my bag of shopping I left there on Saturday, or was it Friday? Either one, I’ve still got the receipt, but not the slightest faith in getting it back!

I made a start on this post up to here and then did some WordPress Reading. On to comments and replied.

0430hrs: The wind is still blowing fiercely out there this morning. Made a lovely mug of Assam tea, before going on CorelDraw to do another Inchcock Today page top graphic for use later.

Ablutions and medicationalisationing were done. Bin bags to the chute.

Down and to the Onerbgruppenfurheresses Shed. Met Welsh Bill en route. I’m glad I did, cause he likes to insult, mock and put down the older folk, and no one else was available. Hehe!

Keine Offiziere oder Kommandeure were available at this time. But a few tenants were sheltering from the rain, and we had a good laugh.

The bus arrived, and I did the crosswords until alighting into the rain at Upper Parliament Street

I called into the PoundShop where I left the food I’d bought on Friday behind. The lady asked others, but they had not had any bag handed in. Didn’t expect them to have indeed. I repurchased some of the same fodder again and made my way to the self-serve checkout. Where a Whoopsiedangleplop of embarrassing and mega proportions was suffered! I’d got the stuff scanned and in the bag alright – but could I get the blocked zip on the coat to open so I could get to my money or bank card? A resounding, thunderous No, would be the answer! What a picklement! The assistant lady tried her best to help me, the checkout till kept asking me if I wanted to continue with the purchase and the Nottinghamians in the queue waiting indicated their desire to, as we locals say… Marmalise Me! After several flunked attempts to sort the zip, she had to put her hand up my under my coat to get the bank card for me to enable me to settle with. With a red face and feeling a twit, I thanked her and paid the bill – remembering to take the food with me this time. The gal had a good wit and humorously said as I was leaving; “Things happen in threes, let me know when you’re coming in again and I’ll take the day off!” She had a lovely smile. Other staff members laughed, but those customers in the queue looked like they were about to explode as they leered, scowled and offered me threatening looks. I beat a hasty retreat! 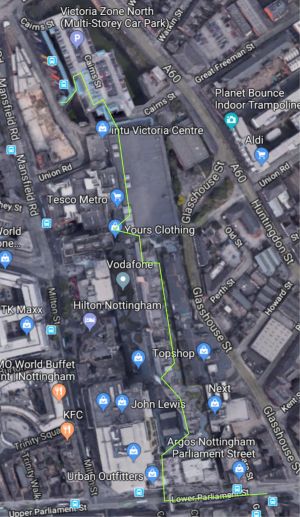 I crossed the road and went to the Victoria Shopping Centre (Mall).

Up to the top floor and called in the Market Place and visited the Afghan chaps stall to see if he had any coats suitable to buy as a replacement for the one I had on. I was confident the blocked zip would defeat all attempts to clear it, it was that bad!

Walked the length of the centre and called into the House of Fraser shop, after seeing their Sale signs and the gents department being near the doors.

I got an Extra Large coat that seemed to have enough pockets to suit me.

The two young nymphets serving, both tried to free the zip on my jacket for me.

Despite their best efforts, it remained stuck solid and refused to move.

One of the lasses got a pair of scissors, but it was no use, bless them.

I paid the bill and made my way through the exit doors, down a floor and into the bus station, which had changed considerably since my last visit to it.

But, I was lucky enough to find the Nottingham City Council Mobility kiosk here, at the first location that I tried. Bit of luck there… very unusual for me! Hehe!

Another bit of good fortune as I left the building and walked towards Mansfield Road on my way to the bus stop. Taking this photograph and the bus suddenly appearing from behind, I was well pleased that it missed 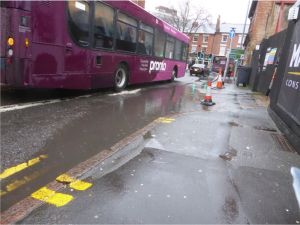 the giant puddle of standing rainwater in the gutter.Thus avoiding another drenching!

I did get a mini-splash or two later, mind. As I walked by the front of the House of Fraser store on the main road, a bus pulled up as I taking this photograph from under my umbrella as the rain got a little stronger. It sprayed some water, but the bloke in front copped for most of it. Was my luck actually changing? 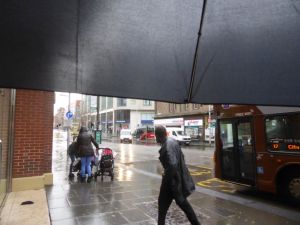 I know it is many years since I have had any alcohol.

But as I plodded on and was passing the Victoria Hotel, oh no, it’s called the Hilton nowadays, I saw a sign with prices displayed.

Boy are these high or what?

Made me so glad I’ve kicked the alcohol into 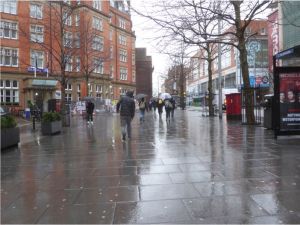 I admit I am not sure what the things on the list were, or any idea what a Package indicates or means. But 70cl is I assume a measurement of the alcohol, that is on offer. I could be wrong, I often am. I had to look up what Belvedere Pure Illuminated (1.75ml). (Belvedere is the toast of Poland and is feted as a premium Vodka throughout the world) and Laurent Perrier Rose 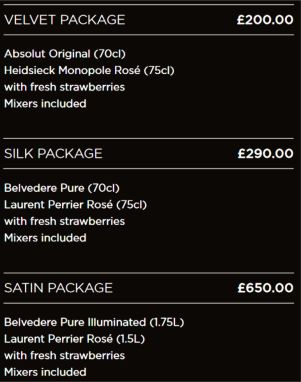 (1.5L). (Laurent Perrier Rosé Champagne Magnum is one of the rare Rosé champagnes to be made using the maceration [skin contact] technique, which gives it the extraordinary depth and freshness that has made it the benchmark for Rosé champagne around the world) meant, when I got home. Not cheap are they? I assume this offer was made with visiting drug dealers, politicians, Brain surgeons and the like in mind? Hehehe! Probably not the likes of this Nottinghamian Street Sleeper I passed on Upper Parliament Street outside the Money Lender and Pawnbroker shop.

Got to the bus shelter and joined a couple of 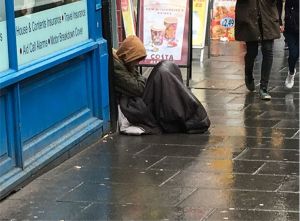 lady tenants. We had a chinwagging session while waiting for the bus to arrive late as is usual for this one.

Arrived at the flats, and called into the Social Hut, hoping to ask Obergruppenfureress Deana or Obergefreitereress Julie for help in detaching the useless coat from my rather rotund misshaped body. But bother were unavailable. The lady who sorts out the power suppliers for us was there with a young man from Nottingham City Homes. I told them of my woes, and they did larf! Haha!

The youth tried to free the zip, but as anticipated it was a fruitless effort, like all those who had tried to help earlier. But I appreciated the people all trying. He lost his grip trying to pull up the zipper, and clouted me on the nose! He tried again, and several zipper-teeth came out as he freed the closure.

Then, him being such a tall man, he had nae bother in dragging the now useless coat over my head and freeing me from the jacket. I thanked him.

Then, I transferred all the many items from the old one to the new coat pockets. I left the deceased one on a chair, hoping whoever has been doing the stealing from the hut, will nick it and find it useless.

Gave both people some nibbles and an Easter Egg, the lady some DVDs I said last week I had, and she fancied. OBergefreiteress Warden Julie popped in and out as she was busy. But I managed to give her the Rolo-Egg pressie. 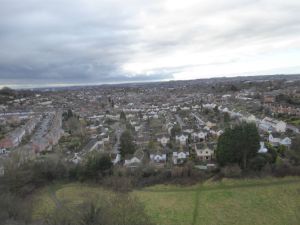 Off back to the apartment.

Got the computer on and updated this diary to here.

The fatigue is setting in now again. So I got the curls and fish fingers in the oven cooking and readied the other bits on the plate.

Took a look to see if owt worth watching was on the box tonight. Too many choices, hard to make up my mind which to watch. 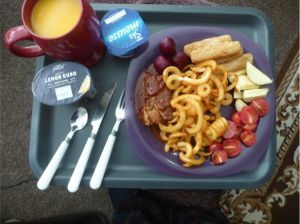 Got the fodder all done and sorted. Smoked mackerel in BBQ sauce, battered fish fingers, sliced apple, tomatoes, beetroot, potato curls and a couple of anchovies on the last of the buttered cobs.

9.4/10 rating for this one. Only the beetroots being tasteless, let it down.

I settled to view the TV programmes, in readiness for falling asleep and the Strobe Alarm to activate. I have no idea if the fire alarm went off or not, so deep was the sleep I fell into, within minutes.

Woke and scribbled some memories of a dream I’d been having. (I know this, cause I found them in the morning and was glad too, cause actual memories later, were none existent.)