0455hrs: Oy gevalt, gadzooks, cor blimey and goodness gracious me! There I was, peacefully dreaming away calmly about the best method for me to commit suicide to pay for my cock-ups and failures; the next second I was wide-awake and in instant agony: The Cramps attack seemed to affect the legs initially. As they began to ease-off, next it was the ankles turn, then the hands and fingers got affected, then the shoulders and neck! I’m so glad they didn’t all suffer at the same time. Phew!

Luckily, I thought, as usual, I had a tube of the Phorpain gel at the side of the £300 second-hand recliner, while the movement was painful and bothersome, I got the cap off of the tube.

And about half of the contents shot out and down my stomach, on the jammy bottoms, and over the TV remote!

Unwontedly, the cramps died off surprisingly quickly. Which was good. For it allowed me to get the remote control dried off with the kitchen towels (At least I hope I’ve done it alright), and the mess sorted out.

A late getting up for me. But last night was a very late one. I was at least fully awake and aware within minutes after waking up, and the agony ceased. Hehe! Off I trudged into the kitchen to get the medications took, and Health Checks tackled.

I moved in my usual svelt-like super-fit, wobbly fashion and hobbled to get my slippers on, guess what. I managed to have a toe-stubbing of a supreme pain-level! That made a change; I don’t think I’ve had one of these for a few days now. The pain and stinging lingered long after the event. I’ll take an extra Codeine and Ramipril for the HBP with this morning’s tablets methinks? Tsk!

The misty Bank-Holiday weather greeted me as I got to put the kettle on.

The new double-glazed glass in all of the kitchen windows had got a layer of moisture laying on them. It was not cold at all, so I opened both windows to let some air in the flat.

Off for a wee-wee.

Made my mug of tea, and got the sphygmomanometer out. Which, worked first time this morning.

Still no signs of any requirement for me to utilise the Porcelain Throne had arrived. No rumbling from the innards either. I wondered if Trotsky Terence was easing off, or, was he tormenting me; so that he could catch me out again later on? Haha!

Computer started, and I got the Excel graph updated for last week and this morning. The odd excessively high Sys and pulse readings over the previous few days irked me. I’ll mention these to the nurse. Mind you, I know the answer I’ll get, it is always the same one. “Keep your eye on them” Hey-ho!

I made a start on this blog up to here and then went to make a mug of tea. As I was going into the kitchen, the rumbling and grumbling from the innards instantly began, and I diverted to the wet room. Which proved to be a good idea, because I made it just in time.

Little Inchies fungal lesion had been bleeding, as had Harold’s Haemorrhoids, and unbeknown to me earlier, the pain gel had run down and gelled the hairs together. What a kerfuffle! 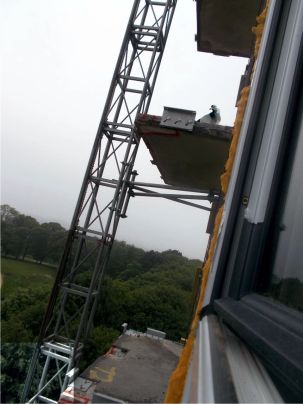 I did get into the kitchen eventually to make the tea.

I took a photographicalisation out of the kitchen window, to the right and up of Noisy Herbert’s balcony.

Seems Noisy Herbert has a visitor this morning, who appeared to be pecking away furiously at something, bless him. He threw me a “What do you want?” look. Haha!

Thinking about the current Trotsky Terence situation and the variable swinging from one extreme to the other effect it is having on my Porcelain visits, I hoped that I do not have cryptosporidiosis. Oh, dear, no!

Made the brew, and back to the computer to finalise yesterday’s diary.

Went to the WordPress reader, some good stuff on there again today.

Caught up with the comments.

Hello, Knock-a-bit Herbert is at it again.

One of the gals on the TFZ commented mentioning the song ‘Green Door effect can’t stop singing it now. Hehe!

A few hours creating some graphics to use late, well two anyway.

I’m not exactly feeling contented this morning. I keep coughing and stopping. No signs of any Porcelain Throne visit needed? The arm has started itching like crazy and bleeding. The shakes keep coming and going. Herbert is doing his hobby which he is entitled to of course (Grumph!). I’ve got to go see the Doctor about things, then the blood test on Wednesday… oh and the Clinic. I felt suddenly so tired and done in, too? I’ve not done any ablutions yet either!

Hello, Knock-a-bit Herbert is at it again. Drilling and grinding noises this time. But, I must remember I have been commanded by the plutocratic Nottingham City Homes Management to put up with this because he is doing no wrong in carrying put his hobby. So, I’ll say no more, and keep my residency, I hope.

I’ll get the chips on the oven and make a meal early I think. Cause I have to get up early in the morning to get things ready before I go out. Then, I must also remember to do the Health Checks, medication taking and doctoring the lesion, piles and arm. Tsk!

They are not pouring with blood, just tiny specks when I cannot resist the urge to scratch at them.

The back is itching too, and the top part of the legs?

I spent hours and hours doing some TFZer graphics again, but still only ended up with completing four of them to use later. Concentration had gone to pot! 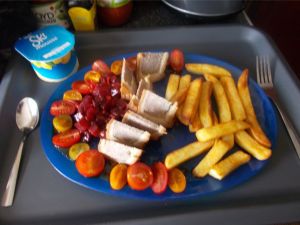 Got the meal sorted out.

U did a lot better this time, in eating it all up. Not that it was anything special. The £1.59 Aldi Melton Mowbray pork pie had more jelly in it than the ones I actually bought on the trip to Melton Market. Very tasty. Rated this effort as an 8/10.

Washed the pots and suddenly, I was a different person again. Aching and itching all over, Dizzy Dennis and Anne Gyna both were giving me some stick now.

Took the medications and did the Health Checks.

Got stripped off and went get the ablutions done. Had a shave, did the teggies, and a good showering session. Therapeutic, alleviational, creaming, oiling, curative, pain relieving, preventative, medicationalisational and sanative duties were performed. Tending to Little Inchies lesion being the worst activity pain-wise.

I’ve got to say I was surprised that during this session, No shakes, dizzies or Anne Gyna attacks whatsoever. As soon as I got into the main room, they returned? Most odd!

Got down in the £300 second-hand recliner, that is now shuddering when in use. A bit like me? Tsk!

Noticed one-heck of a bruise on the ankle, several new pot marks, spots and the like on the legs, chest, feet and arms. Yellow patches?

Must remember to take the Lumix back to the shop tomorrow, to find out why the viewer screen is has stopped working.

Being late again in getting the head down, I still tried to watch an episode of Rumpole of the Bailey. Fell asleep soon afterwards.