0530hrs: What an expergefaction this morning! Confusing and it went on for ages: 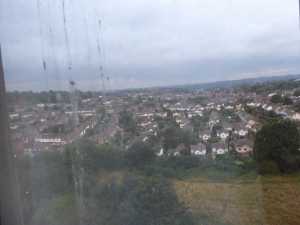 I washed and cleaned up and returned to the recliner room.

I took this photograph through the filthy unopenable bird-poo covered new window.

Looking down, it seemed we had had some rain last night, but not a lot.

The sky did look a tad threatening of more to come.

: Flipping heck, had I been nocturnal nibbling and drinking or what! On the other chair was the tray from last nights meal, containing the empty plate and cutlery, and added after eating, a pork pie wrapper with half of it consumed, empty

cheese curl wrappers, and get this, folks, no less than four empty spring water bottles and an orange juice can!

I cleared them all up, washed the things and got the recyclable can and bottles into a white bag.

It then dawned on me how cold it felt this Saturday morning. 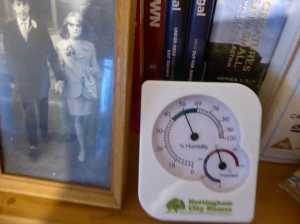 I looked at the monitoring thingamajig, and it indicated that the temperature was the same as yesterday morning. But blimey, it feels nippy!

I nipped for a wee-wee (For the sake of saving space, let’s assume that I did this every half hour or so, please), then took the medications, once again adding a Dia-Limit Capsule to the morning doses.

I tried to take a shot of the rain now falling.

There was a strong wind out there blowing against the air-stifling, view-blocking, filthy plastic covers on the outside of the already dirty windows in the kitchen.

Then, I went into the balcony bird-poo covered window. To try and take a picture of the bottom field to show that the grass on it was already starting to go green again in spots. Nature really is marvellous!

I noticed when I put the picture on here that I had caught the reflection of my hairy legs and rotund torso in the photo. Hehehe! Good job I had just replaced my PP’s with clean ones. Haha! Almost ghostly do you think? If I’d tried to get this image, I wouldn’t have known where to start.

I updated the Friday diary and got it finished and sent off. Then I got the Health Checks done.

On the bashed about balcony base, it had soon started to dry out.

I wondered how much the screws, bolts, and hinges left on the base might be worth. Hehe!

It was not feeling any warmer yet though, the wind kept falling and getting up again, the sun came out around 0845hrs. The distant clouds did look a bit grey. 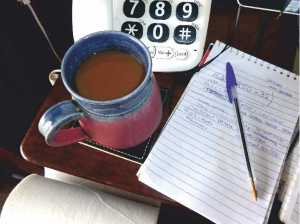 I made a large mug of tea using one Twinings best Strong Breakfast Tea bag, and an Asda (Walmart) weak flavoured cheapo one, with just a splash of milk. It tasted grand!

I got on the computer again to start this diary off.

I suppose I should nip to Sherwood this morning to get some of the liquid soap flakes I forgot to get yesterday.

Went on the WordPress Reader Section. Did some comment reading, well the one I received anyway.

Must get the ablutions and medicalisationing done now. Then get out to fetch the Liquid soap-flakes.

Back in a bit.

Got an early nosh prepared and eaten. I enjoyed this meal and gave it a Flavour Rating of 9.55/10, the highest for a long while.

I thought I’d go to the wet room to do the ablutions.

I didn’t get as far as the wet room. En route, I was suddenly overcome with lethargy, lassitude, and languor. Not poorly as such.

Then Dizzy Dennie and Shaking Shaun started to kick-off, and that little combination did for any life in me, for the rest of the day. The blank-spots were more numerous that things I can remember from here on.

I think Sister Jane or someone rang.

I found in the morning that I had taken the last medications and done another Health Check – by seeing the scribbled updated Health Check Rota on the notepad and the Saturday pots of tablets were empty.

Not a very enjoyable or active rest of the day for the Nottingham Lad.

Again, no sleep came. I seemed to recover somewhat after midnight, but along with this, the grey-cells became overactive. Everything that came into line for consideration caused anxious, dithery, jittery, nervous and perturbed mind activities. Oddly enough, no wee-wee’s were taken. (Until after I’d got in a few hours kip and woke up!) Hehe!

This contradictory, unfathomable day, seemed to go like a week!