04:15hrs. Woke up, which I was well pleased with doing (Haha!), after getting to sleep late and suffering panic attacks as I realised I was laying where the Stroke took place and felt a little bilious. Of course, during the stroke, every orifice emptied out, I mean every one of them, and I threw-up first thing. Somehow it frit me, and I began to be scared of going to sleeping? Silly old thing. I felt right fermished!

Got a shower and shave straight away in case the morning carer bloke comes early.

Caught up with blogs at last.

The Carer man arrived, and he was a different one again. Which meant I had to try and remember how the Foot-Retainer straps have to be fitted. Farcical really. The three carers who I’ve had so far, have all got it on in a different way.

Now, because it wasn’t fitted correctly, I have a danger of the ankle going over and am not confident when walking. Not that it matters too 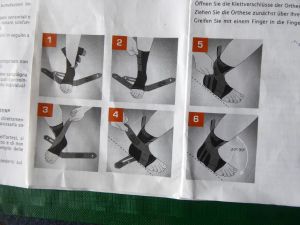 much, I have no intention of going out today.

But you can fall down anywhere when the ankle goes while the Axonotmesis nerve shakes are on!

My mind scares me at times. Hehe!

Did his best, but the printed guide is not very clear for using.

The grip has to be washed and dried using no heat every two days… How am I supposed to find the time to take off the device (then I am in danger of going over) and wash it to get it dried in time for his visit at 0700hrs the following morning? Had I had a spare one, all would be okay. Nice chap though, he helped me search for the hearing aids that I’d misplaced. Surely they know how panicky I feel as it is, trying to remember the whens, whats and times for doing things that I need, that I have already forgotten about… that came out wrong, yet it is right? I think.

I made a list of things to ask about and wrote them on the notepad. Said cheerio to the chap, who said it would be another carer again tomorrow. That could mean more fun with learning about the straps. Hehe!

Then I went on Facebook, while the brain was not too bad. Then, I made a start on this blog. 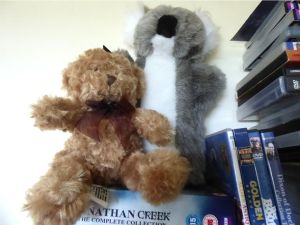 Went to make a brew of tea and put the oven on to warm up ready for the baking of the giant potato. Seeing the Teddy Bear someone (Marie?) sent me, I’m naming him Cuddles! And the beautiful Koala Katie that was sent to me when I was ill earlier cheered me up exponentially.

Oh, is that the right word? I’ll check on it… Yes, exponentially! Hehehe!

But, the shakes started when I got the kettle on, which prompted the legs to join in. Tsk! Then the brain went on strike again. Still, I made the brew and remembered to put the oven on. Smug Mode engaged!

Then I realised I had not taken the medications, so did so. But I could not find any cheese for the spud, so decided to have the out of date polish ham and some instant mash with a boiled egg.

But this didn’t happen. I was so tired I just had some bread thins with the Polish Ham and some sliced lightly salted tomato slices. Then a pot of mandarins in juice.

However,  I misjudged my appetite. I managed two of the sandwiches and most of the tomatoes, and only a few of the mandarins, but I did drink all the juice. I didn’t have anything else to eat at all, but I just was not hungry in the slightest. Not like me at all!

Did some work on this blog.

Gave up, as concentration was poor. So I made up two black bags and took them to the waste chute. I used the stick but found that the ankle-support was not working and it was hard work walking. When I returned to the flat, my next door neighbour Doris was calling me through my flat door asking if I was alright. A warm glow of appreciation came over me, and I adopted Appreciation Mode!

She came in, and we had a little chinwag. .She offered to make me something to eat and a mug of tea. I declined. Partly because didn’t want to be a nuisance and the fact that was just not hungry at all. She departed, bless her, saying she would check-up on me later. How kind was that? ♥

I wasn’t feeling too bad, just not hungry and a little weary. I thought I’d watch a DVD episode of Primeval. Fell asleep in minutes of it starting.

When I woke up, I didn’t know if Doris had been in to make her check on me.

So I took of the foot-retainer and got it washed using some liquid soapflakes.  I hung it up to dry above the sink, but I’m not sure if it will be dry in time.

Then I did a few pots.

I called on Doris and explained I did not know if she had called on me as I’d nodded off, and was about to get a shower and shave. She was very kind and told me to take care. She pointed out that tomorrow is a Bank Holiday, and questioned if the Carer will be working or not? I bade her the same good wishes, thanked her and a good night.

Going back in the flat to the wet room, and the ankle gave way – No support on you see. And they tell me not to walk without it on… How? When only one, that requires washing every two days; and drying without heat, has been supplied? I can’t win here! I added this problem to the notepad, to tell the Social Services lady when she comes.

I had an excellent refreshing shave and shower. Taking care in case the ankle went over again, it didn’t though.  The sock glide was used with a degree of ease, but it still took me fifteen minutes to do both socks. I changed into my nightwear, (No photo, there is a limit to my people-shocking, Hehe!), and checked on the Ankle support I’d hung on the coat hanger in the hopes that it will dry enough to be used in the morning. Naturally, it was still wet.

I decided to finish some more of this diary, then go on Facebook and the TFZer pages for a while.

I took this photographicalisation of the sky through the unwanted, light and view-blocking new kitchen window, of the ominous looking evening sky.

I made a mug of tea. It dawned on me, how little tea I was drinking since getting home? Only my third cup all day, although I had drunk some bottled spring water. Ah, it might be because of all the warm watery milk, masquerading as tea, that I’d been getting in hospital and the care-home? Haha!

Went on the WordPress Reader. Then on TFZer Facebooking.

Before I realised it, it was gone eleven o’clock!

Got settled in the recliner, and it took a while to drop off to sleep, but it was restful when it did come.