04:20hrs. I stirred after only three hours sleep (sob), and like a wobbly automaton, I was out of the near-dilapidated, rickety, gungy-beige coloured, c1968, second-hand, £300, sometimes working, discomforting recliner, and having a wee-wee of a WYSAO (Weak-Yet-Spraying-All-Over) Mode, in the unused overnight EGPWWB (Emergency Grey Plastic Wee-Wee Bucket). Without any trouble as well!

No dancing legs, shoulders, hands or fingers, Arthur Itis, Anne Gyna and Duodenal Donald were all noticeable by their absence. No toe stubbings, or Accifauxpas either! Great start! I was even feeling a tad sort of sacerdotal; which confused me, as there is no reason for me of all people, to find himself in a flushed-peaceful moment? I poddled limping with the stick, to the kitchen and did the hand washing, only the usual socks and t-shirt done.

Then I got the health checks done. The readings were once again, most satisfactory. Sys 147, Dia 73, Pulse 71 (Perhaps this near perfect 71 results I think, is indicative of the unprecedentedly calm mood I found myself in this morning?), and Temperature 34.1°c.

I had another WYSAO wee-wee and cleaned and sanitised the EGPWWB.

I noted how pale the hands had gone since getting out of the brutally uncomfortable recliner.

I went to the wet room to utilise the Porcelain Throne.

I took of the night socks, and as I had expected, the leg ulcer was trying to come back again.

There was no pain though, just a feeling like there were worms inside the leg wriggling about?

I made another brew of tea and got on the computer doing the updating of the Sunday post. The dancing and jumping were rare this morning, other than the leg, which tried to do its Hokey Cokey dance a few times. So I got on reasonably well with the task. I got it finished and posted off. Three or more wee-wees needed while doing this, all still of the WYSAO style.

I got the ablutions tended to next. No cuts shaving, no toe stubbing, either! Smug-Mode was given the go ahead!

Got readied, took the black bags to the waste chute as I went out, of down to the Nottingham City Homes, Winwood Heights Flats, and Administration shed for the Generalleutnantess Wardens Temporary HQ, Sarcasm & Insult distribution area, Tenants Socialisation Shed. Rumourmongering Clinic. Telling Inchcock off Zone, Things like crockery and pottery to be stolen from, and residents room.

I got to the Oberschützeress Wardens’s shed, no residents inside, but Obersturmführeress and Catwalk Model and Warden Professor Julie was working in the office. Julie asked how the power situation was, and I told her about the food thrown away from the freezer. She said claim on your insurance. A quick nibble-handout and an even speedier chinwag, and I was off to the bus stop. A Nottingham City Homes chap followed me out and asked about the power to the flat.

Over to the shelter, where six or so residents were waiting. We were joined by about another eight or so by the time the first bus arrived. They massed on, all in front of me, well, they move quickerer than I can, Haha! 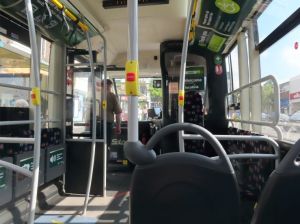 By the time I got on last, all the side-saddle seats were taken and the bus looking rather fullish. I had to walk to the back of the bus, up the steps with the trolley, that was fortunately almost empty (bird food), so I folded it and got it wedged in between the seating. Two stops along, about five passengers alighted, and at the next Sherwood stop, many more got off, leaving just one other bloke and me on board for the journey to Daybrook.

I fell asleep, and missed my planned stop, but got off at the next one. Then walked back and to the Arno Hill Park, and visited the ducks on the pond there. 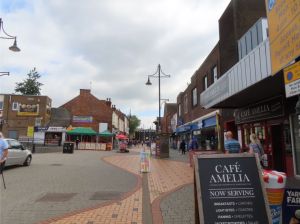 I left and walked into Arnold and Front Street.

Called at Chambers’ provisions shop to investigate their smoked, cooked belly pork availability and quality of. It was very fatty and did not look appealing at all, so I made my way to the Asda Superstore further along.

I spent a while in the store. I bought a new Andy Cap. Then moved to the food section, where I came out with: A bag of fries with bacon flavouring, three cans of tuna in brine, milk, some BBR flavoured Rice, cheapo iced-lollies, pod peas (Terrible they were!), Bread thins (They didn’t have any milk roll bread on the shelves, Tsk!), jelly babies and erm… well, er, err… I’ll have to just come out with it: Guilty-Mode-Engaged! Fresh Cream French Horns! (Another disaster I’ll explain about later).

I went to the photo booth and copied-printed some pictures of Deana & Julie and some of the tenants to hand them later. Then up to the bus stop on High Street. Again, all the others tried to beat me to getting on the bus, but it pulled close to me, and I got on first! Oh, yes! It filled up en route, and in Sherwood, we picked up some of our residents. Welsh William, Roy and Sheila I noticed getting on.

Back at the flats, they all got off first, and someone helped me off the bus with the trolley, bless em, I didn’t know his name. I nipped into the shed and handed some nibbles and photographs to Julie.

Making my way back along Chestnut Way to the Woodthorpe Court flats, I noticed some girls ahead of me. Chrissie, Penny and Sheila, I think.

I couldn’t catch them up, but Penny and Christine stopped to talk to Wimbledon ex-champion and Hauptbereitschaftsleiteress Warden Deana, and I caught them up and passed them. Offering a quick “Good afternoon, girls!” as I passed them by. No response, though, cause they were chatting away. I plodded on and got in the foyer, and waited for them so I could open the door for them.

There was still only the one lift working. For four days now, Chrissie told me. So, we had Chrissie, Penny and another woman with me and three trolleys in the elevator cage. Chrissie organised where we stood in order of the floor needed for each person. Had a bit of a farce. Not enough room for folks wanting to go up, some had to wait, people trying to come down from above, couldn’t get on cause the lift was so full, etc. What a to-do! Hehehe!

I was suddenly so tired again. 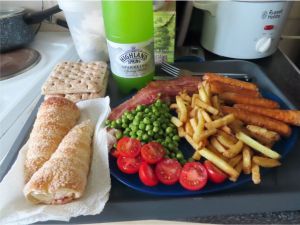 I got the fodder purchased away and prepared the nosh.

While it was cooking, I took the evening medications and had, what must have been a new record wee-wee wise. One of the semioccasional, and very rare MDTAO (Marathon-Dribbling-Trickling-All-Over) Wee-Wee’s.

Podding the peas I threw more away that had mould inside the pods that ever before. As for the naughty Fresh cream French Horns, they were soft and soggy, and far too over-sweetened, after one or two bites, I threw them both away! Mostest dissapointing! I thought of TFZer Janet and Patricia, who also have a fancy for these cakes. But not counting the cakes, a flavour rating of 9/10 for the other goodies on the plate. The chips (fries) were smashing tasting!

As I got read for head down time, well, to watch a Jonathon Creek DVD, I realised I  still had my new hat on. Hahaha!

I nodded off withim seconds I think.

When I sort of burst awake, the first thing I thought was; Hello, no wee-wee wanted? Then it dawned on me, it was still only 22:00hrs! Tsk!