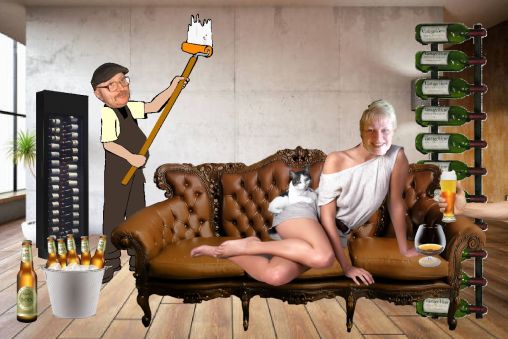 TFZer Lillie, with her decorator and vintner. ♥

I woke and wobbled my body from the c1968 recliner, and off to the wet room for the regulatory wee-wee. A WCT (Weak-Cloudy-Sprinkly) effort this one was. The brain seemed to be in a rare indifferent, dispassionate, almost pococurante mode? Not me at all! The lack of fretting, worries, fears, and even the ailments, (apart from Anne Gyna), were all currently being kind to me. This would typically have made me confused, but it didn’t this morning, I just didn’t care! I was actually worried over my not being worrying!

I wayward thoughts that even I didn’t understand continued. I have always got the Health Checks, medicationalisationing, tablet taking, and a made a brew of either Glengettie Gold, Thompsons Punjabi, or Glengettie Gold tea, after the first wee-wee of the day. But no, not today. The fickle, ornery mind, decided I’d just to take the medications, and not to even make a cuppa! 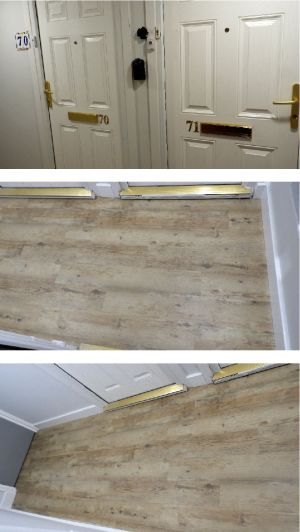 Then it decided to go out of the front door and take some photographs of the new floor laid yesterday afternoon.

I was not impressed particularly, but it was better than the flooring initially intended. Not that it matters much, my recalcitrant brain refused to let me get bothered or much interested. Which made me wonder why it had given me the idea to photograph the new flooring in the first place?

You can see how muddled and puddling my poor brain is today, can’t you? The sooner it returns to its normal anxiousness, lacking in confidence, agitated, cowering mode, the better for me! I can’t cope with it like this, in a rebellious and stroppy condition!

The summoning to the Porcelain Throne arrived, so off to the wet room. And what a session. The rear-end evacuation took that long to get started, I dare not force it, that I needed two wee-wees while I awaited the action to start! I’m not joking! When the activity began, the pain did too. But it only moved enough to stretch things, and Harold’s Haemorrhoids suffered and kicked off to let me know something was squashing the poor little mites, so I had two lots of agony to contend with then!

This was more normal, and the brain seemed to sink back into its pathetic ‘Sorry-for-itself’ and ‘Worried to death about everything’ mode again! I felt more comfortable then. But, still suffering the pains, and things had stopped once more, causing more severe discomfort, but I was alright with that, for I think I was slowly losing my marbles, going unhinged and doolally.

The action suddenly started again, and it so hurtful, it burst out in such haste and agony, the relief left me panting for breath? I stay there on the Throne, trying to regain control over the grey-cells and allow the pain to subside, and another involuntary wee-wee was passed. Despite everything, I almost laughed out loud, as I heard the tinkling in the bowl! Hahaha!

That visit should be recorded, it was crazy, purgatory and I never want to go through one like this again! I’ve got 14-days before the Bowel Examination, the bladder one is next week, I think, then the bowel one the week after, both on a Thursday. The Germoloid applications were somewhat exciting and stung a lot more than they usually do. Hehehe!

Got a wash, and feeling a little nearer to normality now I had something valid to worry about, off to the kitchen. I got the kettle on, and made a start on the Health Checks with the stick thermometer, which was much higher today, the highest I can remember it being, so good news there!

Made the brew of Thompsons Punjana, and got the sphygmomanometerisationing done.

Oh, dearie me! The SYS had shot up to 169? Why is it, that whenever one of the nurses takes my blood pressure, it’s always within range? Unglefrogwonglingisations!

At last, I got the updating started, and persevered right through to getting the blog all finished. Doing this, I should think took me about three hours, during which I needed, wait for it… six wee-wees! Most of them of a WCT (Weak-Cloudy-Sprinkly) type, apart from the last two, which had changed to the JPASB (Jet-Powered-Achroous-Spray-Back) mode! Still, variety is the spice of life, as some twit said.

I got the link emailed, went on the WordPress Reader, replied to some comments and went of Facebooking catch-up. I’ve turned into a right little grafter, now, Haha!

I went to make another brew, and as I was getting the Glengettie Gold teabag out of the tub, I dropped it. Leant against the counter and bent down to retrieve it, and saw the bobble hat and yarmulkes, that had fallen behind the drawers. Guilt then flowed through me. They were now dusty and dirty. But not for long, I got the washing bowl and had a good hand-laundering session. In fact, as you can see below, I got a little carried away with it. Tsk! 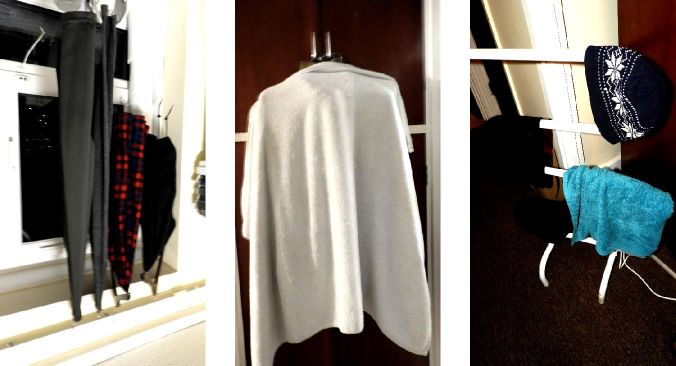 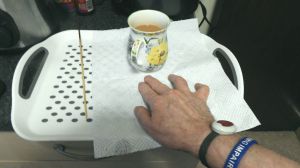 Got the heaters going, and the cloths done, wrung and hung to dry.

Made a mug of Glengettie, and how IO didn’t drop it, is a miracle. Nicodemus’s rotten Neurotransmitters again, and flipping Colin Craps combined attack.

But, I fooled them with swift, cunning, cleverly imposed reactions!

Ablutionalisationing next: Another decent session all around really, apart from getting a bit of a hefty-clout on the grab bar, when Dizzy Dennis visited during the showering. The Germoloiding, causing the worst, pain-wise.

The window cleaner arrived and soon had me done. £12 for the balcony and kitchen windows to be done. Chinwag enjoyed.

Got the waste bags on the three-wheeler-guide-walker, made sure I had keys, bus-pass etc. with me, got the coat on, and out to the chute, mask on, then to the bus stop…

Yes, another little escape from the lockdown, off to town, without a frown, hope I don’t fall over or down! Hehehe! Back in a while – fingers crossed! 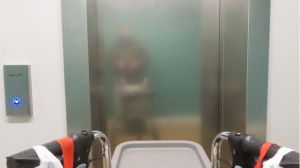 After getting rid of the rubbish bags, I had a long wait for the elevator to arrive.

I thought at the time, I’m going to miss my bus at this rate, but still want to find time to call to see the ILCs (Independent Living Coordinators) Riechsfuhreress and Catwalk

Model Warden Deana, and Unterscharfuhreres and Pole-dancer, Julie on the way out.

I called to see the Wardens, had a little natter and then made haste to the bus stop. But, I missed the bus, Dang-it!

From this point, I have covered events until I got back to the flats, in a Special Post, called: Inchock’s 4th Escape from the lockdown – to town! This is a link, in case you haven’t seen it, tons of Nottingham City Centre Photos on it! 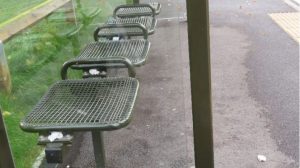 I spotted in the bus shelter, (Columbo? Huh, not a patch on me. Hehehe!) that someone had been using tissues while sat waiting for the bus and had stuffed the dirty used tissues under the edge of the seats! One was on the floor as well. Coronavirus?

Four and half hours later, I alighted the number 40 bus and nipped into the ILCs office, with a little treat from my escape and shopping expedition. You must read of my utter embarrassment in the Poundland shop. I cringe when recalling it. Tsk!

Up to the flat, to unload the overloaded load of shopping from the three-wheeler. In doing so, I found something I’d forgotten to drop off at the office, What a clot! So, I nipped down with it and came back to get the kettle on and have a wee-wee. Henceforth, between now and getting my

head down, I required at least ten more wees! All of the stunted CMA (Cloudy-Mini-Amount) mode, every one of them with a drop of PMAD (Post-Micturition After-Dribble). Blimey, I’ve never used so many PPs in a day before!

I got the bags off of the trolley and emptied the wheeler bag.

What a load of stuff I’d purchased. And I’d only been into two shops as well, the Poundland shop and the Bargain shop!

I split the stuff up and took these shots of the massive amounts of fooder etc. I’d somehow managed to carry home. Smug-Mode-Engaged!

Cleaning and sanitary articles: A washing liquid for black and dark clothes, Zoflora, dr Whittle and a cheap bottle of disinfectants, a fresh-air spray, bleach and a lemon-sherbert (it whiffs very nice, actually) spray.

Some sweety type treats for others and me for Christmas. I got noughat and caramelised almonds for myself, Hehehehe! 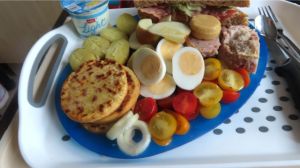 After the day’s gadabout and frolickings, I was so weary, but also so hungry. So the medications were taken and I made up this easy and quick to prepare, evening meal. I thought I’d overdone it a bit, and was sure I wouldn’t be able to get through it all, but I did manage most of it. Damn it, I meant to call Jenny, Grrr!

I got the pots washed, and moved the three hats I’d washed on the airer, and was instantly done in, tired, shattered! So stripped off, jammies on, and down in the recliner.

The sleep took a while to come, but when it did, ah, Sweet Morpheus!