♥ TFZer, at her holiday home ♥ 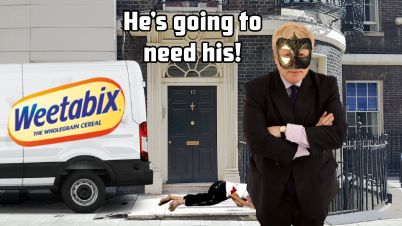 23:50hrs: I woke to Thought Storms that must have been in a dream because they were very active straight away. Fears, concerns, anxious concerns that came and went for ages.

I needed a wee-wee shortly, and after getting IP from the recliner, catching my balance and getting to the NWWB (Nocturnal-Wee-Wee Bucket), I found it nearly full! Still, there was no rush, things didn’t feel urgent. I took the bucket with me to the wet room, used the WC, for a WDWW (Weak-Dribbling-Wee-Wee) and cleaned and disinfected the bucket. While doing this, I thought I could smell burning, and remembered yesterdays incinerated Chilli-Con-Carne in the pan.

I’d left it soaking, and went to investigate to see if anything was salvageable. Amazingly, the last few bits of fodder came off quickly? And the saucepan was usable again! Made a brew, and took the morning medications. 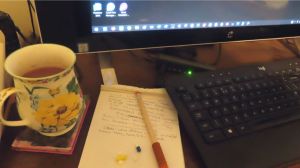 Going to get the computer on to get the Templates started, and I returned to the wet room, to us the Porcelain Throne. Constipation Konrad was thrashed by Trotsky Terence in this mornings DESB (Daily-Evacuation-Stakes-Battle). What a messy affair! Much refilling of the tank, before the great-dollop of evacuated product, was cleared.

Back to the computer and the now gone cold mug of Glengettie, and made a start on finishing off yesterdays diary. It was hard work again, with interruptions from SSS (Shuddering-Shoulder-Shirley). Got it done, posted off, and Pinterested a few photos.

I made up a template for today. Then went onto Facebooking catch-up. The WordPress Reader section next and emailed the link.

I then tried to get the advance Templates done. This was even more frustrating, cause Nicodemus’s Neurotransmitters kept going off-line, and causing me to make many errors and mistakes, many not noticed at first, and I had to keep going back top check earlier work done. Confusing, innit? I persevered…

The scribbled notes and few photos I took will help me remember bits, in the morning… he says hopefully. It may be a little muddled, though!

I turned off the computer to allow it to cool down a smidge, I went to do the ablutions.

I can’t recall things much because when I got around to updating this, it was 22 hours later. I’ll do me bestest. The knees 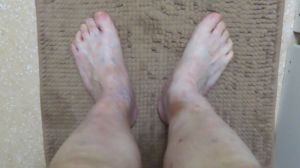 before and legs after the shower were photographed.

I made a brew of Glengettie and restarted the computer. It might have been a mistake turning it off, cause now the internet was slower than ever, and CorelDraw kept playing up and needed restarting frequently.

Mistakes were being made in the Template creations, and much time was lost going back after finding a mistake to correct it. I expect many cock-ups will still have been missed.

Hours later, I got increasingly frustrated with mu wrongdoings, cocking things up, and forgetting, rechecking… Not good! I went to make another brew and took these photographs of the snow shower. The wind was blowing the light snow in all directions, but the shots I took some through the window, a lot of snow came into the room! Haha!

The templating was returned to, and I persisted for several more hours until the need for the Porcelain Throne arrived. Off I poddled

‘Never, in the field of human ablutionisationing have I had such a massive evacuation!’ Much bleeding.

I opened MS Word to find one I needed from my ‘Future Use’ dictionary, and the bloody layout had changed on its own again!

I lost an hour or more trying to get it back to how I wanted it. But had to make do, as it was beyond me this new layout.

It was a slow slog getting the templates all done. If it wasn’t MS Word, CorelDraw or the Internet being incredibly sluggish, there was problem delaying me all day! It wrangled me so much, Duodenal Donald kicked-off.

The snow fell again. A slight covering and the wind with it was more violent now.

I decided to make another brew and take some more photographs. But was not going to make the same mistake as in the earlier shoot – I took all of these pictures through the window.

I tried using the Nikon camera, but it was beyond salvation. 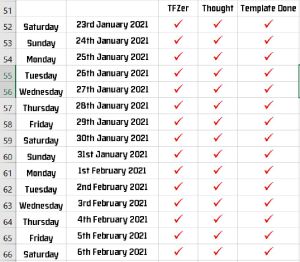 I’ve not had a good day, really.

Eventually, I got the templates done – I’m too tired to double-check them at the moment. No doubt whatsoever that many errors will be found when I do get around to checking them.

I got a pastie put in the oven warming, and the CCC and meatballs, with added sliced capsicum, in the saucepan, I was determined not to burn it this time.

I returned and turned off the computer. I was wrecked mentally. All the things that went wrong, the time lost, and I didn’t mention the wee-weeing, did I – it was repetitive!

: I heard a thud, or loud, dull plop like sound, that had come from the kitchen area. Panic-Mode-Engaged, I hastened to have a look at what had happened. It had to be something severe or dangerous if I heard the noise without the hearing aids in?

A fresh burning smell welcomed me as I got in the kitchen.

Oh, dearie me! After a few seconds in Sherlock Holmesian Mode, I found that the beef pastie in the oven had exploded! The minced beef, onion, gravy and pastry was glued to the door and all over the stove! Crying was one option! On the bright side, the place smelt like the old roadside cafes used to! Hehehe! 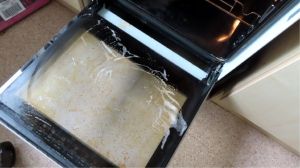 I scraped off as much of the gunk as I could. Then got the Cif oven cleaner spray, and did my best (failing miserably) to get the oven and door cleaned. I even remembered to keep stirring the Chillie-Con-Carne, as I tried to clean the oven, so the saucepan wouldn’t burn!

There was no repeated muttering, spitting out of the terrible parentage-questioning word. Bile growing in the stomach. Depression, or feeling sorry for myself, at all. 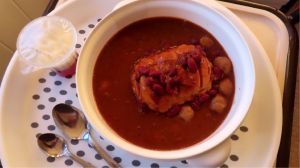 I got the other remaining pastie from the fridge then dropped it in the white plastic eating-bowl (dare not use the oven again). Then poured the pan full of CCC over it. Well, another surprise, no sooner had I buried the pie with the CCC, it expanded and came to the top of the mixture, and burst open?!?! My puzzlement knew no bounds!

Then, I went to get the half-packet of brown bread thins, from where I just knew I’d left it… But no, it wasn’t there! I was sure I’d saved it in the bread bin, thinking at the time, how well it had worked out, having some for this feast, and with Sainsbury’s order due in the morning? (Although, of course, they may not send any, or might send a can of Turpentine as one of their infamous substitutes). The search had to be curtailed before the meal got too cold.

Despite the horrible, frustrating, failure-ridden day it’s been, the meal went down a treat! Flavour rating, 8.2/10! I put the basin etc. in the bowl to soak overnight.

I grabbed the next in line ‘Heartbeat’ DVD from the box and got it playing.

I was happily viewing away, and a thought came to me. (ideas do that sometimes, not very often, mind) Did I drop the bread thins down between the chairs last night? Oh, course, I had to get my body manipulated in such a position that I could shine the wind-up torch down into the darkness to look for any signs of the bread… Why, now that I’d eaten the meal is a mystery?

BPB (Back-Pain-Brenda) twinged, and has been painful ever since… of course, there was no bread down there!