0210hrs: I stirred into a semiconscious state, my vivification retaining memories of an idiosyncratic dream I’d been having. I reached for the pen and notepad; by the time I’d picked them up, the recollections had gone entirely from my feeble mind. I knew actual events were stored into the grey cells seconds earlier, yet all details had now dissipated into the ether… Doesn’t it get to you when this happens! Humph!

But, it is due to start at 1100hrs; which will mean I won’t make it back in time. Always something medical appointment wise to cock things up with other matters that need doing. Something else that gets to me!

A gentle rumbling of the innards convinced me to visit the Porcelain Throne. I got settled

on the Throne, and although it felt like movements were due, no signs of any evacuational activities presented themselves.

Just the one Evil Ironclad black boll weevil biting beetles was spotted, he was swimming in the sink with the soaking cleaning cloths.

Then, to the kitchen, where I found a few of the

danged weevils on the floor.

I dropped them in the old basin of water and bleach, about half of them were dead, the others enjoyed a swim about, the odd one escaping back to freedom!

I think there is a possibility that the Rentokil Flea Killer spray may have worked overnight? I 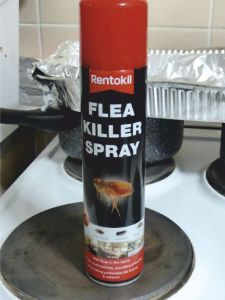 gave under the cabinets another shower.

I gave the spaces between the cupboards and underneath the fridge a long spray of the Rentokil Flea Killer Spray.

Getting very expensive this is! I might send an email to the Chancellor of the Exchequer Hammond, to see if he can help me out financially. Reports claim Hammond is the second richest serving MP with an estimated fortune of £8.2million. While he earns only £138,565 from his Government job, his wealth comes from the housing developer Castlemead which he and pal Tony Gregson set up in 1984. I’ll not mention the hidden back-handers or his expense claims – just in case he does slip me a few hundred so that I can afford to keep buying the Rentokil Flea Killer.

Got the Health Checks done and took the medications. I was pleased with the weight being down a tiny bit.

On the computer to sort the photos on CorelDraw and then start the updating of yesterday’s blog.

A call back to the Porcelain Throne, which proved to be a genuine one this time, was responded to.

A long, slow evacuation followed. But not bleeding from Harold’s Haemorrhoids to bother me.

I gathered many E

Although it does not show clearly in the photograph on the right, I’m sure I saw some of the weevils/beetles having grown or growing wings?

Are they Alien insects? Are they alchemising after they realised that the Flea Killer is affecting them? Will they call on reinforcements from Planet Gog? Hehe!

Eventually, I got the post finished and sent off to WordPress. Then started on today’s diary.

To the TFZer Facebooking next.

The ablutions were completed without my having a shower (Too early to use cause of the noise it makes).

Rain, through the kitchen window

Made up the eight rubbish bags and took them to the rubbish chute.

I realised when I returned to the kitchen, it had and was belting down with rain outside.

Well, I thought. Fancy that.

And me having to go out to the Continental food shop, a blood test at the surgery, and get some Flea Killer spray, if I can, and to the chemist for the prescriptions as well.

Rain, through the spare room window

I went to have a look out through the spare room window, and check the place for any evil Ironclad black boll weevil biting beetles lurking about. A few on the window ledge but not many. I must get to Wilko in Sherwood today, and hope that they sell the Rentokill Flea Killer spray, and get some to use against the flaming tough little critters.

Faith and hope destroyingly, I saw that the roof and windows of the new terrace had rainwater pouring through into the balcony pod. Oy-Yoy-Yoy!

I made sure the brolly was in the bag, got the recyclable sack, and set off down in the lift. 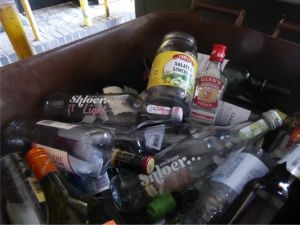 I got down without seeing anyone, and out of the foyer to the recyclable bin with the bag, and place my washed empty pickled cucumber jar in the box.

By Gawd, there was a load of alcoholic spirit bottle in there this morning. Indeed, not enough room left spare for the empties over the next two days from the inebriate imbibing Senior Citizens to use, as the bin men do not empty it until Thursday. Jealous? Me? Hehe!

The Willmott-Dixon boss and the subcontractors were out in the rain working away.

I offered them a “Good Morning.”

I made my way to the Nottingham City Homes, Winwood Flats, Sturmscharführeress Wardens Temporary HQ, Willmott-Dixon workers breakfast and tea-break room, Sarcasm & Insult distribution area, Tenants Socialisation Shed, Telling Inchcock off Zone, Things like crockery and pottery to be stolen from, and residents room. Sturmscharführeresses Julie and Deana were in the office. Jenny, and three other tenants and a Nottingham City Homes couple For the meeting later, I assumed, were in the place. Handed out the nibbles. Had a pleasant chinwag with Jenny and Doreen.

I met Caroline with another lady, coming up the road from the end home on the way down the hill, and we exchanged pleasantries.

A few minutes later the rain started to get heavier again. I got the new umbrella out and up. It is smaller than the other one but copes so much better with the wind.

I got down to the main road and made my way up to the Continental Food Store. I called in and got a packet, well, two packs of the lemon cream filled soft pasties. Well, I’ve become addicted to them!

Despite the rain, as I wandered up the Mansfield Road hill towards Carrington, my unhampered by logicality brain also sauntered off and pondered over our Government. It decided: We are Governed by Millionocracy.

The traffic was building up now. The vehicle horns were honking more often. 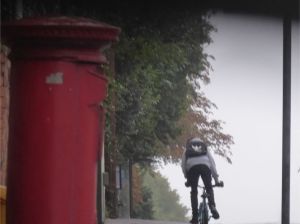 As I neared the top of the hill, this delinquent Nottinghamian Pavement Cyclist came from behind me and made me jump with surprise.

As I followed him, I rather hoped that I might find his body spread-eagled on the pavement, mangled up with a cut-open head and broken limbs from the falling off his bike and bleeding profusely. But no such luck. Tsk!

I hobbled on down to the surgery and was well-soaked by the time I got inside. I put the brolly down and in a carrier bag, and went on to log on with the newish receptionist. Bless her she saw me and said to me, in a kind voice: “I’ve got you, Mr Chamberlain, please take a seat.” I didn’t realise I’d changed my name, though. Hehe!

I got the slightly damp crossword book from the bag and had a bit of a successful bash at the puzzle. Smug Mode Adopted.

All my worries were soon temporarily forgotten; when Nurse Nichole came to collect me, telling me off mockingly, for concentrating on the crosswords and not hearing her call me. But she can do anything and say anything she likes to me. If I was twenty-five years younger… (To Self) No, point in dreaming Inchcock, you foolish Klutz!

She soon got my blood taken, and because she had a job to stop it bleeding, we managed a little nattering session which I enjoyed no-end. I gave her some nibbles, thanked her and handed the receptionists some goodies on the way out.

The rain had eased off, and I went to Carrington Pharmacy and collected my prescriptions. Gave the staff pack of the Lemon cakes as a treat and thank-you. The boss asked if I wanted to book my flu-jab with them. But I told him I’d already got an appointment with the doctor.

Out to the bus stop and caught a bus to Sherwood. As I alighted the vehicle, the rain was torrenting down. No chances of any photographicalisationing in this weather.

I got across the road and into the Wilko shop. Found they had some of the Rentokil Spray, and I bought two of them, along with a bait trap. Paid the lady and made my way to the bus stop at the top of the hill. Two lovely old dears from the flats were waiting, and we had a chinwag about this, that and everything, while we waited.

Back at the flats, we hobbled together back to the apartments, and I rushed to my apartment for a wee-wee, just in time! 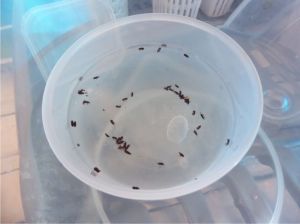 I found many of the Evil Ironclad black boll weevil biting beetles in the kitchen, around the areas that I’d sprayed earlier. I put them in the bowl and threw them down the sinkhole after spraying them with antiseptic disinfectant.

About half of them were dead already.

So I sprayed around again in that room and the WC. 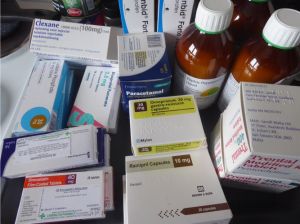 Then I got the prescription medications into the proper allotted drawer.

I set about updating this blog for a few hours, and then the mobile phone burst into life.

Got to it in time. It was the surgery. The lady said she had to alter my appointment for the Flu-Jab. IT was for 0900hrs on Tuesday 16th October. Now it must be on Wednesday the 26th of September! I begged for an early time, explaining that even today’s blood test time of 1000hrs was late for me. The best she could manage was 1010hrs. I was well miffed about this! And, really wee’d off at having turned down the Chemists offer, where I am sure I could have got an earlier time, and on a Tuesday. Which is potentially much better for me, because I might get a call or email from them with short notice as I am on stand-by for a cancellation so I can get the strangulation operation done. I know that Mr, I’ve forgotten his name… Bruescque? Attends Nottingham on Wednesdays… Oh, I’m all uptight now. Grumph!

Just when things seem to not going so bad, life twists the knife in.

I carried on up to here and got the oven on for the chips for the meal.

Had a bash at the WordPress Reader section. Then, some Facebooking, but the Virgin internet was so slow again. 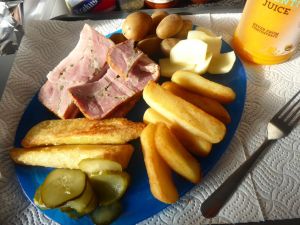 Got the nosh sorted out.

Not one of my best efforts. The parsnips didn’t have enough glazing on them, the chips (Fries) were tasteless, the apple too soft, and the small potatoes boiled with way too much balsamic vinegar seasoning! I left a lot of the meal, binned many bits (Parsnips, chips, apple and half of the small potatoes) as I nibbled along.

On the plus side, the pickled cucumber and pork knuckle with seasoning and herbs were almost perfect! With very little oleogustus content, the pork knuckle really was one of the best I’ve ever bought.

I fell asleep with the tray laying on the chair.

2 thoughts on “Inchcock Today -Tues 11 Sept 2018: A battle won against the Evil Ironclad Boll Weevil Beetles – but, the war continues!”