00:10hrs. I woke from the night’s Colin Cramp affected kip, but felt so drained and tired still, I drifted back to sleep. A rarity that is.

01:45hrs. On this awakening, the need for a wee-wee forced me to detach my overly-stomached body from the £300 second-hand, ci 1968 recliner and make use of the Furesomide Inspired Emergency Grey Plastic Bucket. It was of the SWWW (Short-weak-wee-wee) variety.

I tried to work out why I felt so tired-out. Colin’s Cramps was as painful as its ever been last night, so that must be part of the reason? Why this should happen, I don’t know. The fingers warped and hurt, the ankle and toes as well? But no signs of any bother at the moment. The dodgy knee that let me down yesterday felt fine now? A confused old reprobate hobbled carefully to the kitchen to do his Health Checks.

The sphygmomanometer worked the first time.  Well, well, what a change this time!

SYS well down, DIA well up, and the pulse belted up to 97! Bad enough, but the old Sony camera is now capturing things that were not there.

Note, the whatever it is to the right of the Start button? Beats me! 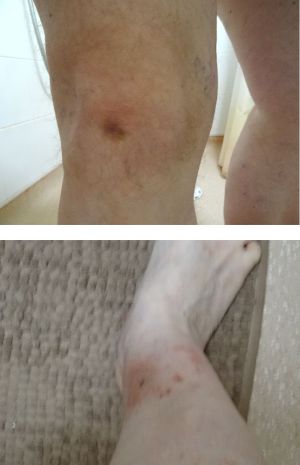 I made a brew and had to divert to the Porcelain Throne. Another lightning quick Trotsky Terence affair.

I investigate the pins situation. Both the knee and wound thing were looking much better this morning.

Medically, things ain’t too good at the moment. I bet the phone call last night that I missed was from the surgery, clinic, hospital or health centre. Humph!

On the way back to the kitchen, I felt movement from the right knee and was not liking this at all. A smidge of nervousness kicked in.

I took the medications with the mug of tea; it was well cold enough to be safe to take the tablets with. Washed the pots from last night. Had another utilisation of the Furesomide Inspired Emergency Grey Plastic Bucket, and made a start on this blog as far as to here.

0500hrs: Posted some pictures to the albums on Facebook.

Hello, that headache coming back again. Tsk! I took an extra codeine tablet with the early lunchtime medications.

Went to get the ablutions done. Did the teggies. Cleaned and medicated the two lower regions in need. Had a shave, and got under the shower… Dam & Blast it! The two red lights came on again after a few seconds! I turned off the shower at the power. Gave it a minute or so and tried again. Put the power back on, turned on the shower… Same Again! Within a few seconds later, the lights came back on! I left it for a while and pottered about in the kitchen. Ten minutes later, I tried again. Just the same! So, I had to have a stand-up wash, yet again, instead.  Humph!

Then, after medicating Little Inchy and spraying on the Brute, I found I was not able to get the socks on! The legs had stiffened, and mainly the right one’s knee was too painful to pull up to get to the feet too high enough for me to get the hosiery on. This is not good! Fingers-crossed that things ease up for tomorrow morning. Just as well I get enough exercise just pushing my luck, in thinking things might improve!

Moroseness-Mode-Engaged. However, a faint trace of yesterday’s absurdly over-optimistic moment of looking on the bright side through rose-tinted spectacles had lingered. And I was again determined not to get into a depressed, self-pitying, sorry-for-myself situation. The last thing I want is to become is an anhedonia sufferer (Lose my capacity to experience pleasure).

So, I forced myself to get the black bags sorted and off with them to the waste-chute. I noticed we had both lifts working this morning. Are things looking up? (Careful Inchcock, you’ll be believing in flying pink elephants, next. Hehe!)

Not really feeling up to going for a walk at the moment, so I decided to go outside and do a few photographicalistions of the Winwood complex.

I got appropriately dressed, well, all bar having no socks on. So I wore the new pair of slippers to keep my sockless tootsies warm.

I got into the lift and went down to Jenny’s floor to drop off her pressie. But she was not available.

So, when I got to the lift lobby on her level, I realised I had not taken the hearing aids down with me. So, back to the 12th-floor and picked them up. To the elevator and down to the ground floor. 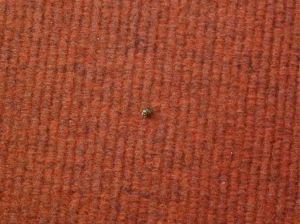 Where I embarrassingly became aware that I had also left behind the mobile phone. So, back up and collected it. Once again into the lift and down and outside.

As I left the lift, I spotted signs of the usual yearly year Ladybird invasion. I got the camera and took a shot of it. There were many more outside as well.

As I stuck the old camera lens through the fencing to take this picture, I had a terrible feeling that I might have left the SD card in the computer. But, all was well, it was in my Sony.

Even if I did get red-eye in the resulting picture. Tsk!

The sunshine shone, little wind and all in all a decent day out there.

I crossed over the road away from the complex and attempted a panasonic shot. No, that’s not right, is it? Panorama shot, that’s it!

*Below is the same picture after I’d worked on it in Coreldraw for a bit of fun. Hahaha!

We had a little chinwag, and the Warden/Guards were kind enough to stop working for a moment, to pose for me to take their likeness. Good innit! I told Deana about the shower.

I said my farewells and off I went to take even more photographicalisations of the this peaceful, romantic, pleasurable hive-of-love known as Winwood Heights! 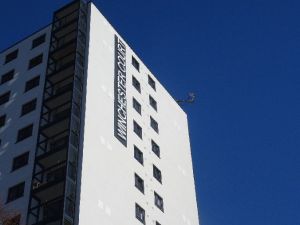 I observed that Winchester Court had now had all the fallen-off letters on its nameplate on the end of the building replaced.

I began to form my ideas for the doctoring of the panoramic shot above.

I think I like the new Art Deco colouring of the apartments now. 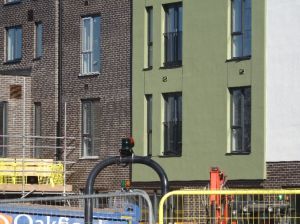 Most apparent on the new Winwood Court and Wardens and facilities offices block, in between the old two blocks of flats.

I twisted my left ankle as I mounted the temporary footpath (Of sorts), against the forty-foot drop down to the allotments, via the moist soil, grass and trees. (Note that last week, I said it was a thirty-foot drop – but I’m feeling in a more dramatic mood today. Hehehe!)

Across Chestnut Walk, I espied several busy workmen hard at it outside the Winwood Court, near to where the bus roundabout will be located. It could be of course, that they are digging for missing residents?

This made me think back to my working days. Which was not a good idea, not with my history of failures and having being made redundant three times!

When I got to the part of the fall-off on the verge, I took this photograph downwards. I had a plan on what to use it for later and to doctor it for a funny on CorelDraw.

But blown if I can remember now, what it was I’d formulated for the humorous graphic.

I ambled along and walked behind the flats.

Where the mound one would have to walk over to get all the way behind, I found too challenging and painful to climb up.

Another drifting off into deep thought. Mostly feeling a tad sad, at my bodies and minds catabolic decline. This pain in the heel, the knee giving way and my memory lapses are the most bothersome at the moment. Waiting for the kidney checks and the results of the swab test on the leg wound and examination, are equal second on the list. Haha! Mind you, by the time I get to go to have either looked at, they’ll have cleared up, or I will have croaked it. You’ve got to laugh! Well, I have to! I don’t want to obnubilate the situation.

I got in the flat, and Sister Jane rang. From the library where I think she said she and Pete were going for a talk on Suffragette history. She was concerned because I had not sent the usual email with the diary link. I checked on Google, and I had done. Pete might have missed it with me getting up so late (for me), and posting it off so much later than usual. She had to go when she knew I was still alive and kicking. But I managed a couple of minutes nattering, to annoy her. Haha! Pete found the Email. Nice of them to worry about me, really. Bless em!

I did the midday Health Checks.

*I got on with sorting the photographs I’d taken, ready to go on this diary. Then started to do the updating. (Spent hours on the computer)

Then, the door chime burst into life. It was Hauptsturmführeress Warden Deana, she left me a letter, did the alarm checks with control and had a look at and tried the shower for me. The red lights came on, and the shower stopped! We tried again, the same result. She called the maintenance and advised them for me. They are going to try and get someone out before 1800hrs to look at it if they can.

I did some more updating of this blog. I stayed awake much longer than usual, cause the maintenance electrician might possibly, perhaps, maybe, be calling sometime up to 18:00hrs, or not, whatever. Not easy for me to stay away so late. I’ve been up for about 16 hours now, and tiredness is dawning.

I’ve left the door unlocked in case I do not hear the chap… if he comes. I’ll get some sarnies done-up I think. I can watch a DVD with subtitles, then I will not need the headphones and should hear him… if he arrives. 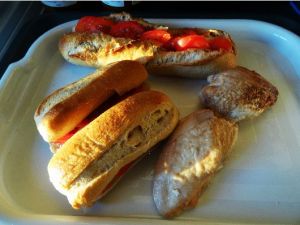 Did the Health Checks and medication taking, and got the bread in the oven, to make the nosh.

The electrician didn’t make it. Quite understandable, taking into account the late in the day request. In a way, I hope the shower does not work in the morning, cause it may make me look a fool if it does when (if) the plumber arrives to look at it. Nemo Mortalium Omnibus Horis Sapit!

So, at 1810hrs, I got the headphones on and watched Heartbeat on the TV. Well, that’s not true. I started to watch Heartbeat, fell asleep within a couple of minutes, woke up to watch the start of Police Interceptors and nodded off again.

At least the cramps were far less severe.