TFZer, dancing at the Cool-It-Cabin! ♥ 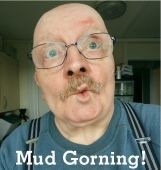 00:05hrs: I made a template for tomorrow, then started this blog off for the day.

The piles were still very tender from the earlier mammoth, excruciating Porcelain Throne visit! That will stay with me until the end of my days! Argh! So bad was their stinging, that I stopped computerisationing, and went and got some Germoloid onto Harold’s Haemorrhoids, gave them another clean-up, and a good creaming. Ahh, that’s a bit better, no, much betterer. Haha!

I sent the Email link off for yesterday’s post. Then went on the WordPress Reader.

I was making the tea, again, when the Porcelain Throne Alarm arrived. (Sorry about that, Nicodemus’s neurotransmitters and Suddering-Shoulder-Shirley clandestinely decided on a sudden joint attack), the innard’s Throne-Alarm arrived. So, off to the wet room.

Trying to find a one-word description of this session was easy today. AGONY! What the hell caused this imitation blackened hazelnuts-like evacuation to give me such pain, I don’t know. But poor old Harold’s Haemorrhoids, are in even more discomfort now! It was a slow, no-control-over grind! I just don’t know if taking Macrogol, will help or hinder the situation?

My being a well known, much-mocked and laughed at tergiversator, procrastinator, and a well-intentioned, senility-seeking old fart, but lacking commitment, who over-worries, and at times, is scared to opt for, make a choice or decision, I despair about this! Never used to like it?

Belatedly, I meandered to the kitchen to get the medications and Health-Checks done.

During the ten or fifteen minutes I was in the kitchen, I took some shots of roughly the same view, they made up an interesting little montage, showing how quickly the morning was breaking, really early as well!

I went to the medical cupboard to get the blood pressure machine, and was it there? No!

No panicking, but plenty of confusion milled-about in the brain. I am sure that I put it back in the third drawer down, as I always do, yesterday. I was pretty confident I had, cause I can remember trapping my finger as I pushed the drawer to close it? I even had a look at the finger knuckle, and it was still a little marked?

I ferreted around in cupboards, shelving and the other drawers, but couldn’t find it yet! I took a moment or two and really had a good ponder over what I could remember of the incident. Then stared blankly out of the window, hoping for inspiration in recalling where I should, could, would, ought or might have put it.

I maintained my sanity, just. The EQ was telling me to forget it, “You’re bound to come across it later, there’s no rush, nobody is going to call to see you, you’ve nowt on order to come today, pull yersen together, make a brew and gerron wiv the blogging!” (My EQ and I, both speak with the same Nottingham accent, you know!) But moments later, the niggling botheration departed, as I had to, to the wet-room for another Porcelain Throne session! Argh!

As I hobbled on my way, caught my toes against the four-pronged metal walking stick and I cursed a smidge.  But no time for sulking, the Throne had to be used! At least all the signs told me so, but No!

I got in and on the Throne and minutes later, I reached for the crossword book. My poor confused-more-than-usual brain was still concerned with where I’d left the flipping hemadynamometer, and a grand total of nil, zilch clues were answered! I think the walnut-like lumps of evacuation material, must have gelled in the gut together like cement, for as hard as the innards and I tried there was moving it along! In some discomfort, I gave up and had a clean and freshening session. Hey,-ho! No bleeding though!

As I was leaving the wet room, it dawned on me I may not have turned the taps off properly (♫ It’s not unusual… ♫) and went back in to check them…

Oh dearie me, indeed! There on the shower chair, was the BP machine! Of course, then it all came back to me, Humph! I’d got a tiny cut on the knuckle when I closed the medical drawer, a wee-dram of blood had gone on the camera lens. And got the need for a wee-wee at the same time, and off I went to the wet room, to clean the camera and take a wee-wee. It’s all gin-clear now! I recall it in detail! Plonk-a-Whatta!

I got the ablutions tackled. And compared to yesterday, it was a great deal betterer! The dropsies were a lot worse mind, but no shaving cuts and medicalisationing went just fine.

The photo on the right is a bit of a mystery! It looks to me, like it was taken in the front room or kitchen, not the wet room? (All a part of the mysterious wonders of Woodthorpe Court: The Ghosts, Hobgoblins, Boll-Weevils, Aliens, Gremlins, Karakia-cursing entities, hallucinations. materialisations, poltergeist, lemures, wairuas, kehuas, manifestations that permeate, pass through the pores and interstices of space, through the time-continuum. Usually, without rupture or displacement within the building. To cause havoc, fear and frustration, as they dislodge time itself, in their aspirations and skulduggery, to complete their given by Lucifer, mission, “We must annoy, scare and piss-off the energumenist Inchcock, at all costs!’ mission?” 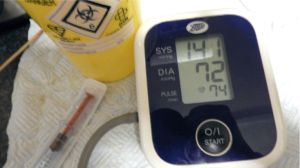 Then, off to get the much-belated sphygmomanometerisationing readings were done. The SYS was down ten points the Dia 12 points, and the Pulse down 6 points.

Great readings this morning. Or is it afternoon now? Hahhaha!

I then got around to drying off, a bit of burlesque ensued, I’m afraid, here.

I knocked so many items off of the floor cabinet with the first waft of the towel around my back! What a mess I did make! I spent ages getting in back into the same disorder it was all in before my Towel-Attack!

ermic, and it was soon injected and all done. A longer needle on these ones, but a piece of cake to inject. (That reminds me, I hope Iceland have some more of the apple pies in stock) for Friday, Haha!

I got the kettle on, and realised I’d been drinking tea on and off all morning? Why? ‘No idea!’ Fair enuf!

I got some vegetables prepped and into the crock-pot for later. Red onions, leeks and I can add a tin of peas later.

Then I remembered I have the mushrooms in the fridge, so went to fetch them to, wash, slice and get them in the pot with the other veggies.

Opened the fridge door, and there the mushrooms weren’t! I had a dig around in the fridge, but nope, they were AWOL? I looked just about everywhere for them, silly places as well, without any luck.  I’ve bamboozled myself now! Twittle-Prone-Pillock!

I took three photographs of the view from the kitchen’s thick-framed, designed by someone who hates old people and photographers. Are impossible to get to for cleaning, without risking life & limb, climbing up the stepladders and down again. That’s obviously, only if you don’t fall off of steps, due to old age, Rheumatoid Arthur Itis, Cramps, Dizzy Dennis, Shuddering Shoulder-Shirley, Diabetes Insipidus, collapsing, Vertigo,  Saccades Sandra, Nicodemus’s neurotransmitter failure, or you get an involuntary Stroke affected right leg’s Neuropathic Schuhplattler dance routine kick-off, and topple you off the ladder, and break your neck... Where was I? Oh, yes, the photos!

I took the first picture in Auto mode, the second in Landscape, the last one was taken using the Aperture Priority setting. Do you think one of them, is better than the other two? Thank you.

Oh, ‘ecky thump! A triple ailment onslaught nearly had me over! Shaking Shaun, Saccades, and Shuddering-Shoulder-Shirley amalgamated to put the wind up me! They did a good job, too. This put end to any computerising, and I got the nosh sorted straight away; because I feared a bad spell coming.

The concentration and focus failed, and I had to do my best to concentrate. I got my meal served up alright. But what a mess I was leaving in the kitchen. Got down to eat the repast, no taste rating, because I felt only half-with it. I didn’t eat it all.

I managed to do the pot washing, amidst a messy maze of cooking residues, that my mind didn’t seem to want to know anything about? (I now know I didn’t take any medications).

I can’t even recall getting down in the recliner? But woke up later, with a persistent panicky niggle, that I’d left the tap running? I stupidly got up and went to check, without the stick… the mind full of ackamarackus.

As I was going through the kitchenette door, a sudden short sharp (catching me by surprise) involuntary right-leg Neuropathic Schuhplattler dance had me over, landing against the counters doors, arm outstretched to ease the inevitable effects of the tumble. (Photoed later)

I remember the fall and collision as my overweight body banged into the cupboard handle and sliding down to make contact with the floor! But nothing else until I woke

up to find myself half-in-out of the c1968 recliner?

As endings to a day go, I could have done without this one. Hahaha!

11 thoughts on “Inchcockski – Tue 4th Aug 2020: Ended up with an involuntary Neuropthic leg dance, that had me in a heap on the floor! Tsk!”