Cool TFZer, at her own Cool-It-Cabin ♥

03:20hrs: I came back into semi-life, feeling very peculiar-most! For there were no demands or needs for a wee-wee or the Porcelain Throne to be used! I’ve not never ever woken up in this odd condition for years!

As I heaved my blubbery-stomached body out of the £300, second-hand, uncomfortable, c1968, none-working recliner, the stinging from Harold’s Haemorrhoids caught me unprepared. Gawd, they were in a furious mood with me! I felt the trickling of the blood in the PPs! Botherations!

I hobbled with a new style of limp adopted, to try and ease the pain of the piles (Hehe!), off to the kitchenette. I found myself in an unexpectedly industrious mood this morning. No Thought-Storms, no Dizzy Dennis, and I hadn’t walked or banged into anything on my way to get the Health Checks done! Positive-Smug-Mode-Brewing!

I got the kettle on, took this photograph of the morning view from the new, light & view-blocking, thick-framed windows. I used the Nikon camera, choosing the Night Landscape option. I was a little disappointed with the resulting shot. Hey-ho!

I got the kettle on and decided to take my temperature first, with both of the thermometers. This is because what I am recording, seems to mean I am dead, according to cyber buddies, Tim and Doug. Haha! I photo’d the results. The stick thermometer indicated the readings were in centigrade 34.3°c. Which is 93.7° Fahrenheit, according to the converter I used on Google. Then I again looked up the average temperature for a 72-year-old male, I got this: In older adults, the average body temperature is lower than 98.6°F (36.2°C). Hmm! Might have a word with the nurse next week. If she’s due that is, no one has given me the dosages or levels of INR Warfarin, so I hope they contact me today with the details. Tim Price was spot on with the figures he gave me. 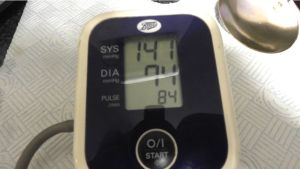 By the time I’d finished faffing about with the temperature, I had put the kettle on again and did the BP sphygmomanometer checks. They came out a smidge betterer today, the Sys was down on yesterday by nearly 10 points, that was good to see.

I made the brew of Morrison’s Extra Strong Assam tea. And jolly tasty it was too! Then I took the medications. If the pile’s pain persists, I’ll risk taking another Codeine later. 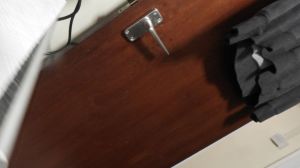 However, when it came to uploading the photo of the mug, I found this picture on the right, instead. Ah, the mysterious wonders of Woodthorpe Court: The Ghosts, Hobgoblins, Boll-Weevils, Aliens, Gremlins, Karakia-cursing entities, hallucinations. Materialisations, poltergeist, lemures, wairuas, kehuas, manifestations that permeate, pass through the pores and interstices of space, through the time-continuum. Usually, without rupture or displacement within the building. To cause havoc, fear, and frustration, as they dislodge time itself, in their aspirations and skulduggery, to complete their given by Satan, ‘Let’s annoy and scare the energumenist Inchcock’ mission? I was not having any interference from Dizzy Dennis, Shaking Shaun, or even Shuddering-Shoulder-Shirley, so why and what, how I managed to miss with this effort, I don’t know? 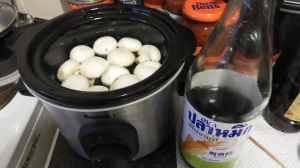 I got the mushrooms in the crock-pot, not cooking, just to put some fish sauce in the bowl to marinate them for a while. That sauce, come vinegar, is excellent! I’ve got some more coming later today, I hope, from Sainsbury’s. I’ve got another two orders arriving today. (Dumbo!) One from Iceland and another from Sainsbury’s. I’ll not starve then! Wot a plonker! 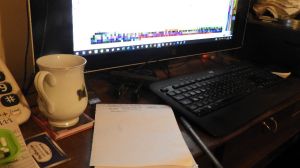 To Computer Cameron, I made a temp[late first. Then began to update Monday Inchcock Today post.

This took an inordinately long time, due to just one ailment that had decided to play me up; that was Nicodemus’s Neurotransmitters failing, for the first time all morning, frustratingly, only when I started typing! Knackwrangling bad timing! Spit!

I persisted and plodded on, and got the updating finished, with more correcting and finding mistakes than for a long time! Posted the blog off on WordPress, and nerve-ends seem to start working again? Ah-well, such is my fate! Still, I was over the moon about this, and pressed on as quickly as I could, before the Neurotramsmitter’s conked-out again. Sent off the links, Pinterested some photos, and went on Facebooking for a while. Had a perusal of the WordPress Reader section.

I made a start on this blog, but had to divert to do the ablutions early, as Iceland is due twixt 9>11:00hrs. Sainsbury’s are due between 15:00 > 16:00hrs. Still, I think I’ve got free delivery, no charge by having a late one? We shall see! Sainsbury’s also sent a message that from next week, all their deliveries will be loose-delivered, no carrier bags. Not sure what to do about this. By a shopping trolley? Haha!

No shower usage, of course, too early for that, the noise it makes might disturb my fellow Woodthorpe Courtonians.

Back in a bit…

Well, that was a fantastic ablution session. No toe-stubbing, no dizzies, no banging or walking into anything, or knocking owt over! The total dropsies were only about five!

When it came to the job of medicationalisationing, it was a different story, though. I got the new tube of the precious Germoloid from the medical cupboard, I found it had a plastic extender in the box.

Ah, with Harold’s Haemorrhoids being so tender this morning, I

thought I’d try this out. A mistake! With not using this device before, and having to use the right hand just as Nicodemus neurotransmitters went on strike again, the inner-piles got roughed up a bit, and the blood flowed. I shall not try the tube thingy again. It was a heck of a job stemming things, and it took me ages. Still, all calm now!

I was confused to see the mark from yesterday’s toe-stubbing was visible again, and the ankle ulcer had started to transmogrify again? I got the trousers and slippers on and poddled to the kitchen.

As I was taking this picture of the morning view, the rain started to get heavy later for a few hours.

I made a brew of Glengettie brew, but I did not drink it. The first sip and the toothache blasted away at

me! Argh! I must ask someone to ring the Dentist for me. Fingers crossed!

The door chimes rang out their Dusty Springfields ♫ ‘I only want to be with you’ ♫ tune. It was the Iceland chap delivering. The poor soul was soaking wet, as were the bags of delivered products. We had a little natter, which is a rare thing. I thanked him and slipped him a can of G&T in appreciation of his efforts, and took the bags through to the kitchen. I’d bought a pile of kitchen towels, and had to open a couple to dry them out, I added them to the stack, near the 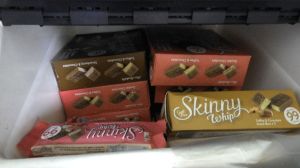 radiator. I think the kitchen-towels might last me a few days. Hahaha!

I got the Skinny Whips in a container to keep them cool.I’ve got these to hand out as treats. I like them myself, but wit the teeth in the condition they are, I dare not eat any until the dentist has had his pleasure of filling and extracting few molars.

I made a brew of Glengettie again and purposely allowed it to cool down and took another Codeine. To counter the pain from Harold’s Haemorrhoids and the teeth. It didn’t do much good, but I dare not take any more of the painkillers.

I then made up a funny poem. Link: Coping With Old Age

Posted it off, and was amazed at how easily it flowed from my bumbling, tired old brain. I decided not to have a meal as such, as after the Sainsbury order comes and gets put away, I’ll be ready and capable, only of sleep-searching. And any cooking or knife usage in my current sudden fatigued state might be too risky. Funny how common sense often appears when I weary?

Then I realised I had the mushrooms in the crock-pot I’d forgotten all about. I turned them off hoping they would be alright for eating tomorrow. Fungleboggles!

I got on the £300, second-hand recliner, with a determination not to nod-off and miss the food delivery. As I was struggling to stay awake, I turned on the TV, yes, I was that desperate. Haha! And the landline flashed. It was a male voice, claiming to be from Virgin, and wanted access to do the repairs. Me: “What repairs?” – Him: “You have a problem with your TV ‘box’?” – Me: “No, I don’t have a TV box?” A long silence… Him: “Did you not report a fault?” – Me: “No” – another long silence… Him: “Oh?” and he rang off? Still, it helped me stay awake if nowt else!

The door chimes rang forth as I was getting back down on my bottom.

The Sainsbury’s fodder had arrived. He’d been let-in by someone, and was soon up and putting the bags in the hallway for me. 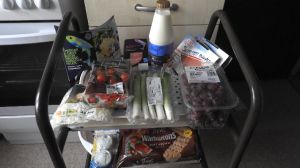 To the kitchen and got the items sorted out. There was no item list with them, so I don’t know if anything is missing or not. Humph! Started with the fresh stuff first. The surimi Royale and plain fish sticks totalled four packs? Mmm!

I’d got some iodised salt, and an expensive box of the Smoked Sea Salt Flakes, on impulse as usual. Potato cakes, X-strength Marmite, and a large pot of lemon yoghourt, amongst other items. And more tins of Heinz curried baked beans, Gannet!

Took the evening medications, pondered on what the innards were up to, no Porcelain Throne visit today, and got settled for sleep searching. 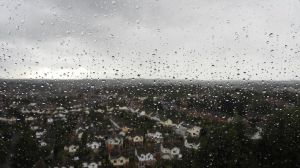 After an hour or so of part-nodding, but not achieving any actual sleep, I got up to get a drink of milk, thinking it might help me relax.

The rain was pouring down again, and my spirits dipped a smidge as I toe-stubbed my left foot against the server tray wheels, dropped the four-pronged walking stick, bent to retrieve it, Back-Pain-Benda kicked-off, and I clouted my right knee on the edge of the stove!

It was a long time getting off to sleep, but at least the Thought-Storming gave me a break this time.