I woke, wanting a wee-wee. But did not move. I lay there, my weazened brain immediately hyperactive, fighting with the thought-storm already in progress. Nonsensical, insignificant, it might have been, but topics serious and insignificant were fribbling away, to and fro, being ignored as the next one came forth.

Luckily for my sanity, the need for a wee-wee grew stronger, and the brain recaptured some control from the thought-storms and allowed me to tackle the task of tearing my Titanically sized stomached-body from the grasp of the c1968 recliner, and up onto my feet. Grabbed Metal Micky, and over to the NWWB (Nocturnal-Wee-Wee Bucket)

Where I was almost taken aback by the viciousness of the evacuation. It blasted out, but soon died a death and the PMAD (Post-Micturition-After Dribbling) was lengthy, the leaking continued for longer than ever before.

I got the kettle on, took the evening medications, made the tea, and got to the computer, started it going. Then, an internal explosion rumbled away, and before it had died down, I was making my way to the wet room!

A good job I did too! As I was seating my oversized body on the Porcelain Throne, the motion began, totally under the innards’ control. I did no urging or pushing. It wasn’t needed – until right at the end of the evacuation. The last dollop got stuck, talk about messy! I reckon I used about £2 worth of Andrex! Then the most valuable asset, time, was lost cleaning up again! Washed and sanitised things.

The Silver-Lining was that the cistern miraculously cleared the product in the bowl, with just one flush! Whoopee-Doo!

I got on the computer, and started WordPress, to get the updating of the Sunday diary updated. I was overjoyed to see that Grammarly was working again! I struggled with the concentration for some reason; however, the ailments were far less bother than usual, so typing was easier for me. A long job, but I eventually got it done and posted off to WordPress. Pinterested a photo or two, then emailed the link. Went on the WP reader, some great photography on there this morning.

As I was doing the Facebooking catch-up, I remembered that my favourite Vampire Nurse, Hristina, is coming this morning. To take the blood for the INA, DVT, Warfarin tests. That cheered me up a few degrees. I read and made the WP comments.

I got a bit of, well a fair bit of a shock when I took the Sphygmomanometer BP Health Checks! Not much!

I took the rescued from the Pharmacists cock-up of not lids on the pill pots, and I had to guess which was which medications last night. Perhaps, guessing from these readings, I’d missed taking a beta-blocker, and took a Codeine or Furosemide, no that’s not right. I meant I may have taken two Beta-Blockers in mistake… Had I done this, then the Pulse would go down, wouldn’t it? I’m confused

At least the Chinese made Harpin Xian Di contactless thermometer came out alright, just a smidge lower than of late.

I had a look at the recorded results for the last week. The Sys is the highest it’s been for the week, and the Pulse is by far the lowest it has been? Then I sp[ottedthat yesterdays Pulse was a massive 91?

I’ll mention this to the nurse later, see what she thinks. Well, I am worried a bit now. Should I ring 111 and ask them what they think? Mmm?

Best if I get the ablutioning done early now, and at least if they do end me to hospital, I’ll be clean and dressed in readiness. ‘Good idea, Inchy’ – Huh, I’m talking to myself again! Hahaha!

I checked on Google, it said amongst many other confusing gumph; Generally, a resting heart rate of 60-80 beats per minute (BPM) is considered normal. Perhaps the 66 pulse is okay then? Don’t know what to do; still, I’ll get the ablutions done, I can try out the new razors, have a talk with myself, pass wind, and get 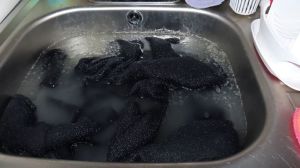 all smelling nice! Even though it is too early to use the shower.

Put the Blue Made in Myanmar (Burmese), zip-up jacket soak in the bowl to soak while I was doing the ablutions. Off to the wet 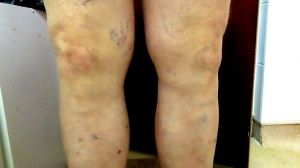 Ablution Report: Again, no cuts shaving at all! The legs and knees looked good again, despite Cartilage Cathy playing up something rotten. You can see she’s not

happy by the swelling patella.

A slight Whoopsie medicating the rear end dropped the tube cap and clouted my shoulder on the corner of the floor cabinet retrieving it. SSS is not happy with me.

Got the shirt rinsed and

hung up to dry on a coat hanger above the sink.

SSS (Shuddering-Shoulder-Shirley) shook a bit a few times. This made me spill a lot of water, and I had another lot of cleaning up to do. Luckily I had not dressed then, so avoided a bigger mess that needed sorting out.

Made up, and put some waste bags in the trolley carrier box, 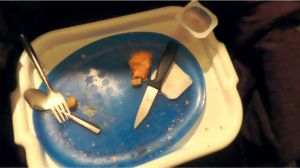 top, to take down later to the bins. I came across last nights dinner things on the tray, and I remembered falling asleep so easily last night, I took the things through to the kitchen and washed 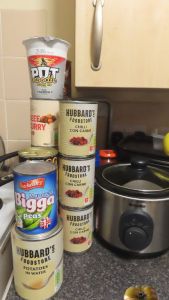 It was heartwarming to see the cans of Chilli-Con-Carne and vegetables on the counter. A warm glow, knowing they should last me a while.

Then needed another visit to the Porcelain Throne. I hastened without delay, and once again, it was a good job I did! Once again, it was a super-messy evacuation, but I was not lucky with the cistern, that required a few jugs of water to refill the tank before things cleared. Tsk! 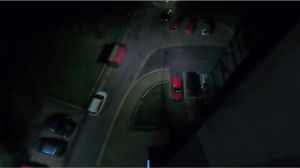 I took a photograph from the balcony, of the end car park on Chestnut Walk. I thought it looked eerie enough to be a worthwhile picture. Gawd, it was cold out there!

I worked on this blog, and without much bother from Nicodemus’s Neurotransmitters, either. Which was nice! Did a few hours work.

Made a cuppa, and ate some Pretzels. Returned to the computer, and another hour or so later, it was as if someone was putting lights on in the sky! The most amazing pinkish glow came over everywhere! I grabbed the camera and had a scoot between the two rooms nad windows to take these shots to capture it. It didn’t last for long, so I’m glad I caught it.

I had a look at the Your-Area email magazine. They seem to be happy with the new Coronavirus figures? I can’t say I am.

08:00hrs: The Vampire Nurse shouldn’t be too long coming.

09:00hrs: The Vampire Nurse hasn’t come yet. I’ll try to do some graphics, then she’s bound to arrive.

Nurse Hristina arrived around 11:00hrs. She was all behind due to parking difficulties. She was kind enough to look at the Health Check record and said the low pulse was nothing to worry about. Unless it is lower next time I do it, then to call 111 for advice. That’s cleared the gloom, Bless Her! ♥  She took the blood and left on her rounds.

I gt back onto CorelDraw, but the weariness started already, my concentration was shot, and CCC began to give me regular shakes. Then Neuropathy Pete’s mini-leg dancing started. Shame, I really need to get some graphics done, too! I did try, but it was no good. I went into Sulk-Mode!

I got some stew in the pan, and a pastie in the fridge… no, I mean oven. I’ll get something to eat and see how I feel afterwards. (Which didn’t change, weary, tired and nervous of everything!) 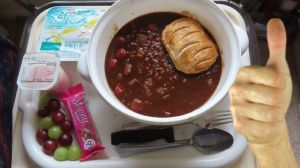 Despite the nerves, all being on edge, and fighting the eyelids to keep them open, I made a decent job (tastewise), of the Chilli, even added a beef pastie to it, and all the dessert trimmings. A flavour-rating of 8/10, too!

I even got up and put the well-emptied bowl and things in the washing up bowl to soak with the saucepan.

I got down again in the £300, second-hand, c1968, cringingly-beige-coloured, not-working, rickety, incommodious, grotty recliner, but sleep was not an option. I’d expected it come swiftly tonight, feeling so drained.

The CGTSMP (Can’t-Get-To-Sleep-Master-Ploy), was adopted, and I turned on the TV, when I saw that Law & Order was on, I chose that channel. The usual happened, I stayed awake for the first section, and when the commercial break started, I joined the realms of Sweet Morpheus.

But I kept waking up in a widden-dream, taradiddle filled, not the usual Thought Storms, they were wild, nonsensical and mocking in nature. During one of these episodes, I realised I had not taken the evening medications, so I did.