0300hrs: Woke up trying to recall the dreams without any luck again.

Noticed the rather large pile of paperwork that needs attention, and went into a depression, albeit a short one, for the call to the Porcelain Throne arrived that needed responding to. Out of the £300 second-hand recliner, had a visit from Dizzy Dennis as I did so, and off to the wet room.

All right in this session, very good. No pains, bleeding or troublesome evacuation.

Made a brew, carried out the Health Checks and took the medications.

The computer on and did this diary up to here. I then tried to respond to the Nottingham City Council Electoral Register Officer’s letter regarding eligibility to vote.

Well, that went well. Even did a survey at the end of completing the ‘No Change’ demanded by law, options.

Later, I hope to see someone to help me with contacting the 3 company, either Warden Obergefreiteress Julie or  Wardeness Obergruppenfurheress Deana, to ring them for me again! It’s been four months and four payment demands from them in a row from them since I changed banks. Despite being told I want to end the contract, they still command amounts of their money.

I wanted to see Dean yesterday, but no Wardens were on duty. Just the Nottingham City Homes woman, who scripts the sarcastic notices on the wallboards was there.

Went off to make another cuppa. And tried another panorama shot, by hanging out of the kitchen window down to the scene below. (0615hrs). It didn’t come out anything like I thought it would, missed off a lot of the horizontal area. Guess I’m doing this wrong?

I then set about finishing yesterday’s diary.

Did some WordPress reading.

No time left for frivolities. Must get the ablutions done so I can try to get to see Obergruppenfureress Deana and ask her to help me with the erroneous phone bill confusion. If she is in, that is.

Ablutioning was done haste this morning.

Got the bag with Reich Marshall Wardens nibbles and down the lift and to the Temporary Winwood Obergruppenfurheresses Community Shed. (What a mouthful, Hehe!)

in the beautiful weather to find it empty.

One of the building personnel came in, wished me a good morning and made himself a mug of coffee and settled with his feet up.

I walked back to the flat’s foyer and had a go at some crosswords, to kill time until I returned in search of a Gruppenfurheress. 20 minutes or so later, I ventured out again to the shed.

Obergruppenfurheress Deana was in and assisting another tenant with something.

I took a wander around while I waited patiently and found these new posters on the wall board.

The construction company had supplied updates on the works progress for us to look at.

Kind of them that I thought?

Deana became free and explained before I spoke, that she was swamped and would not have time to do any phoning about and would I like to make a time and date to come and see her again later?

I asked her if he would just take a look at the letter from the ‘3’ telephone company for me to clarify what I needed to do now. She kindly did so. It turns out that they had cancelled the contract at last, and sent me a cheque for £21.54. I thanked her and gave her the nibbles.

Made my way to the bus stop, in the warm sunshine.

As I walked along the roadway, (walking along the road was the only option at this end of Chestnut Walk, due to the vehicles parked on the grass verge.) I walked between the cars and under some huge bushes to take this photographicalisation.

Towering over me high up above, the blackberries that had not been got at yet.

As I took the shot, it reminded me of last year, when I saw a family group climb out of their people carrier and get the ladder off of the roof-rack and use it to get at the fruits above. Hehe!

To the bus stop and around a dozen residents were in the queue. Had a little chinwag with those I knew and the bus soon arrived. It was the friendly female driver this time, always ready with a laugh and witty comment she is.

They all got off in Sherwood, leaving Mary from the 6th floor and me to have a natter as we carried on to Arnold.

I went into Asda and had a peruse around. Ended up at the elf-serve checkout with Beef pastie, Purple chips (x2) No idea why I bought two of these cause there’ll not be room in the freezer. Clot!), Orange lollies, minced beef, onion bhajis, yellow pepper, Marmite cashew nuts, Lemon desserts and a lamb stew ready meal.

Wandered down to the Iceland Store for a nosey around.

Sad to see so many more retailers had gone out of business. A good while until the bus home was due, so I took my time and ended up buying just one pack of potato chunks with cheese inside, and cooked chicken portions that were guaranteed free range. More to struggle to get into the freezer! Humph!

Made my way back to the bus stop on Front Street. Stood there for ten minutes looking around to see if Mary was coming my way to get the same bus. Then I caught sight of her at the bus stop up the road and realised; Oh dear, I was at the wrong bus stop!

I walked up and joined her, and we had a nattering session. I showed her the purple chips, and she mentioned that she had forgotten to get some chips. So I gave her a bag of them. She did not want to accept them, but after my explaining about me foolishness in buying them and the lack of room in the freezer, she took them, bless her.

On the bus and as it got to Bestwood, part of the ‘Diversion Route’ due to the roadworks, we came to a halt.

The driver gal shot the bus right into the housing estate around the back and came out at the traffic lights and was let in straight away by a driver, and we were third in line at the lights! Brilliant! We all gave her a round of applause!

Back at the flats and walking to the Woodthorpe block, I had a funny turn, Dizzy Dennis, again. I was with May and Mary and tried to pretend to stop to look at the work taking place. May (Left in the picture below) picked up on this and asked if I was alright, bless her cotton socks. 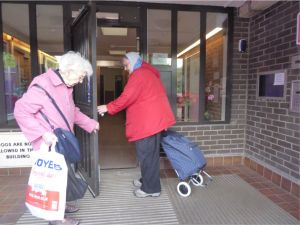 The entrance door mechanicals or electrics were playing up again and only opening a few inches.

The girls who arrived at the door well ahead of me forced it open and held it ajar for me to get through.

Times like this I am glad and grateful to be alive when people show such compassion and care for others. I thanked the, profusely.

I’m not sure if the gal is named May but think it might be her name, I forget you know. Hehe!

Back in the apartment and onto the Porcelain Throne. Phew!

Good job I gave Mary the purple chips, cause as I suspected, there was very little room in the freezer, I could only get the potato with cheese bag into it! And that, after grappling with a rearranging session.

So, I had to eat nearly all of the bag of purple chips with the meal. I threw some away.

Have to give this meal a rating of 9.4/10, it went down very well indeed. Possibly the best one in weeks, now.

Health Checks and medications tended to and sorted.

Did the washing up and settled to watch a Law & Order episode. Fell asleep at the first set of advertisements and woke up hours and hours later in desperate need of the Porcelain Throne. All good, though, no bleeding from anywhere.

Made a brew and pondered on wether or not I should try to get the mounting stack of paperwork in need of attention sorted… fell asleep again!

What a dream I had too! I wish I could remember more of it. I was young again and this time around (in the dream of course) I got things right. It seemed I could do no wrong, then thought I’d woke up but I hadn’t, and sent myself back into the passed again, and all was not right this time… but how it actually was? I woke up in reality all confused! Tsk!