0200hrs: Woke and regained a modicum of logicality and concentration. As I lay there getting up enough steam to tackle the sorting out of what needed doing, it dawned on me that the laundry had not been done yet. Out of the £300 second-hand recliner with ease, almost. Gathered the prepared bag of clothes and accoutrements and off down to the laundry room. No tea making, wee-wees or stubbing of toes – I surprised myself with my determination. Noegenesis seeking, I pressed on.

Into the lift # two.

A search and inspection revealed no beetles lurking anywhere within the confines of the cage.

The lift rattled a bit, as it descended down to the ground floor. 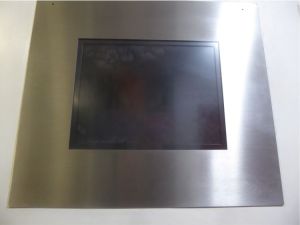 The automatic notice board sign was out of action when I got out.

I perused the notice boards, but could not see any new signs for us.

For a moment a bit of a panic set-in when I nipped out to take a photo of the foyer area. I thought I had left the door-fob up in the flat. The stomach went cold as I searched not 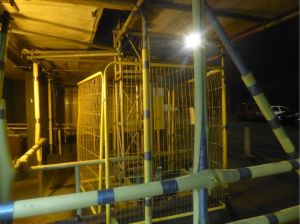 expecting to find the item, but it it was in my pocket after all. Phew!

It felt warm outside this morning, I could hear the birds chirping and singing away to their heart’s content.

A little early in the day I thought?

Off to the laundry room and cleaned the washer drum, then got the wash-cycle started.

Surprised me some of the things I see in the laundry room waste bin sometimes.

This morning it had sections of polystyrene

The input trays had to be cleaned up and old soap powder removed. Wiped around the casings.

Off back up to the apartment in lift number one this time. Had a visit from Dizzy Dennis on the way up. Only a short one, though. 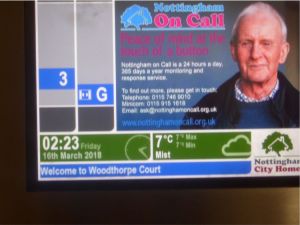 The automatic-information sign near the elevator doors was now working again.

Up and in the flat. Had a wee-wee.

Started to finish off the Thursday diary.

Down again to move the things from the

I had to clean out the filter, cause whoever used it last forgot to do it.

As I did so, it moved and trapped my finger in the gap as the plastic sprang back into

I think I might have said at the time, ‘Well fancy that!’

Got the clothes out and folded them up – but:  The magic missing sock syndrome returned!

Oh, I was annoyed with myself. I checked the drums on the washer and dryer in case I’d missed it earlier. No odd sock found! I pressed on and got the folded clobber into the big blue bag.

Cleaned the filter and casings and as I turned to leave, there was the offending sock right in the corner behind the door! A real mystery to me, how it got there. But I was so pleased to have found it.

I thought I’d done well, then I realised I’d not taken the jammies, dressing gown or towels down with the other things to launder!

Up to number 72 and got the Thursday diary finished and posted off. Sorted the pictures ready for using later.

Checked the emails next, and I’d had one from the surgery re the blood test. They had booked it for Wednesday 21st at 0905hrs, with Nurse Ann.

Got on with starting this diary of next, got as far as here. Then went to the WordPress reader, then comments. 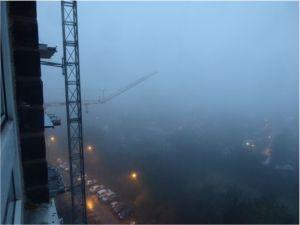 Went into the kitchen, and was startled when I saw the fog and it was raining so heavy as well. When I got back to the computer, I had a look at the weather forecast for this weekend – Amber warning for snow and flooding!

Seems that today rain that might be followed with some snowfalls.

Sunday the most significant threat with snow showers forecast.

Makes it worse with the freezing temperatures overnight. Oh, ‘Ecky-thump!

Went onto Facebook to see if things would allow me this time. Slowed down often, but I got most things done.

Off to do the ablutions now. A good session, apart from the medicationalisationing procedures.

Got things ready, and left the flat. Got the door locked

and took the black bags to the rubbish chute, to the lift and realised I had not got my hearing aids in. Returned to get them.

Departed again, locked the door, and well well, fancy that. I had not got my hat on! Back in again and collected it.

The best of this series of Whoopsiedangleplops this one: Out once more, and realised I had my slippers on! Back in and changed into the shoes.

Got to the lift, and remembered I had forgotten to take the Chips, to give to anyone who liked them. This being part of my running down of naughty-foods, in my effort to lose weight. I still have all those ready meals in the fridge, but am not going to throw or give them away. Back to pick the box up. Tsk!

Outside on Chestnut Walk, the place was busy with workers again.

Got to the Temporary Wardens hut, and both Deana and Julie were in their office. I popped in to explain about my not getting anything information wise from the Fire meeting yesterday.

Seems that many other tenants were the same. She didn’t seem bothered by this, that assuaged my guilt.

Mary, Cindie and Welsh Bill were all in the big room. They all looked and sounded in good form. We had a decent nattering session.

The buses arrived, and we went out to join the mass of residents waiting. On the City bound one, and got the crossword book activated.

Dropped off the bus and I went to Tesco. With the aim of seeing what vegetables they had on offer, and get some potato cakes. The choice of veg was dismal, tatty, with some out of date. I wandered to the bread section, and things were the same. Out of date loaves, and their potato cakes had doubled in price and only had one day’s shelf life left on them. I put back the basket and went.

Walking through Trinity Square, and Dizzy Dennis paid me a visit. He stayed a while, and that was not appreciated. Eventually, he cleared off. I decided to have a walk around town, to kill time and get some fresh air until the next bus home could be caught. Not feeling very good, and Anne Gyna kicked off. 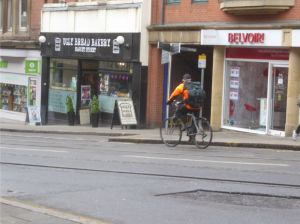 Hobbling down Market Street, I noticed a Nottingham Cyclist going on the wrong side of the road going down the hill.

Seconds after taking this photo, he veered onto the footway. How he missed hitting the sign on the footway, I don’t know.

But it was a testimony to his cycling skills, all done at speed as well. Good job there were no pedestrians around. In fact, the place looked like a ghost town.

It brought to my mind, a picture of the few Nottinghamian residents, having survived a cataclysm and apocalypse, were wandering around, not knowing what to do. Their mobiles and iPads don’t work, no one around worth mugging, nowt on the TV! (Deep that, won’t it, even surprised me!)

Down to the Slab Square.

Bleak, depressing, dark, dank, sad and dismal were the words that came to mind.

I think I might use this photo to make a funny as a page top for later. 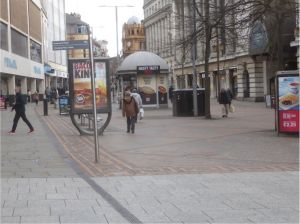 I walked along passing the Jehovah’s Witnesses, a drunken beggar, the street-sleeper on Long Row, the newspaper vendor, the youths sat on the wall drinking cans of lager, the Nottingham Pavement Cyclists, two delivering Pizzas according to the box on their backs.

There were no Big Issue sellers to be seen this morning in the centre.

I took a final picture of the Little John clock and tower and made my way up past the man with his guitar singing the Praises of the Lord, at the junction of Queen and King Street.

The depressive atmosphere prevailed even at the bus stop. People around in numbers, but no one talking? Got onto the bus when it arrived.

Entered the flat, up the lift and ran into my neighbour and Obergruppenfureress Warden Deana as they were getting into the elevator. Words of greeting were exchanged.

At the flat, I was somewhat perplexed to find the door unlocked. Had I failed to do this earlier when I had to keep returning to collect things I’d forgotten to take with me? I don’t think I’ve ever forgotten to lock this door before? Had someone been in, somebody who had called to see me and found the door open! Mmm?

Thee thoughts soon left my brain, as I had to go to the wet-room to clean things up and change PPs. A little bleeding had taken place while I was out and about.

Went to the kitchen and did the Health Checks. I notice Deana walking at rapid speed along Chestnut Walk.

Got the camera and zoomed in to take a shot of the busy gal.

My mind turned to the attention of the comestibles. It is not easy to comether myself not to eat my usual foodstuffs. I still have three ready-made meals in the fridge that I do not want to throw out and love the taste of them. I must eat them, but with far less other foods… This is not easy.

I decided in the end, to have sliced potatoes with grated cheese sprinkled on then, and tomatoes sliced on top. But, I let me get carried away with the side-stuff again. Felt somewhat guilty after I’d eaten it. But, I did so enjoy it. Tsk!

At least I have ordered some vegetarian Cumberland Pie on next weeks food order. Tsk, again!

Got the ablutions done. Afterwards, as I was putting the new PPs on, I tripped and cracked my forehead against the side of the sink. It was a cracking-good belt it was too, cause when I put my hand out to soften the blow, it got entangled in the PPs I was struggling to get on. So I was too late to lessen the blow. The truly amazing thing was that pain subsided within minutes, and I cannot see any bruising whatsoever on the head. Nothing at all, not even a bit of red colouring?

I was determined to watch some ‘Hustle’ on the box tonight and got down earlier than my usual. Hoping to nod-off, thus making it possible for me to watch some of the programme when I woke again. But no, I nodded off and stayed that way. Humph!