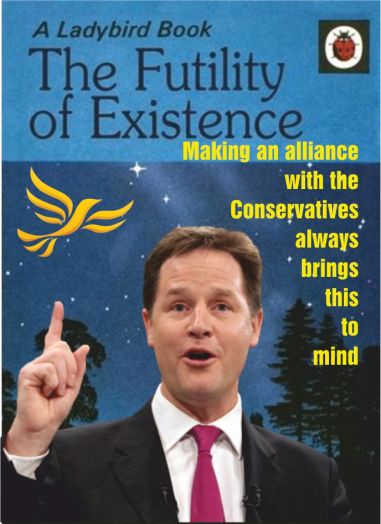 Contributions from the schlemiel who thought David Cameron was trustworthy and reliable. (Tsk!)

0220hrs: With a sanguineness and condemnatory-like filled mind, I woke to the accompaniment of worries, anxieties, jealousy and a definite overriding sense of unclassified foreboding, milling about within the brain. My head felt like I had no control to retain the rambling and uncontrollable insurgent thoughts within it.

I forced my still tired body out of the £300 second-hand recliner and had a bit of luck with the lack of mind control, that brought back some degree of authority. I stubbed my toe on the Ottoman.

Off to the Porcelain Throne. A most excellent evacuation this morning. No bleeding from Harold Haemorrhoid at all and the Fungal Lesion had only been bleeding the smallest bit. This indicated that the Warfarin level must now be a little low and I must surely now be in Ticker-attack-Stroke mode.

I regained control over the wandering thoughts and went to make a brew and do the Health Checks.

I injected some Enoxaparin and took the medications.

Surprisingly, I had to return to the wet room and porcelain to have another wee-wee?

During which I, unfortunately, banged my right knee against the edge of the floor cabinet when I bent down to retrieve the tube of Germoloid I’d knocked over. Arthur Itis started to give me hassle within seconds. This, in turn, brought my attention to the needs of the day.

I washed up and got the computer on and examined the day’s reminders on the Google Calendar. Foot Lady Sue due around 0930hrs, and the blood test for 1145hrs at the Sherrington Medical Centre in Carrington. I remembered that I have not yet had a re-appointment date from the Gum Clinic, I’ll email them later (He says sounding so confident that he’ll remember – Humph!). 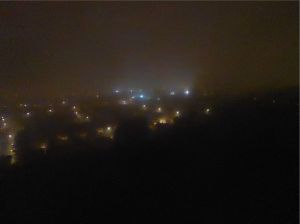 The tea had gone cold, so I went to make a fresh one.

Waiting for the kettle to boil, I took this photograph through the kitchen window. A most difficult task while the windows are still prevented from opening by the security cables.

The mist was still lingering outside.

With no effort at all, I managed to drop the camera as I brought it back in from the partially open window with one hand to the left of the security cable and one to the right. This poor camera has had a hard life. Hehe!

I got the Tuesday Diary post finished and stored.

Then, started this one off up to here, and then posted yesterdays off.

Got some Facebook graphics on, and it let me work on comments etc. For a while, before going slower and slower.

Closed the computer and went off to do the ablutions and medicationalisationing. After which I tried to remove some stains from the shower floor. Failed!

An hour later, all refreshed, I sorted and took the black bags to the rubbish chute. Took a photo of the top end of the lift foyer to show how they looked before the windows were installs on the lower end.

Back on the computer to continue updating this post.

The mist still lingering a bit.

Had a look at the forecast for the day on the web; Windy, showers and cloudy.

Hope the rain keeps off on my hobble to Carrington and the Blood Test.

I got the nibbles in the bag for the medical staff.

Foot Lady Sue due anytime now. Hopefully, she will not be late, so I still have time to get to the blood test.

Gathered the things, DVT record, nibbles etc. and off I went for the visit to the nurse, and set off.

Spotted a note on the board in the lift foyer on the ground floor on my way down. Warning folks with cars and garages about this coming Saturday’s works taking place. 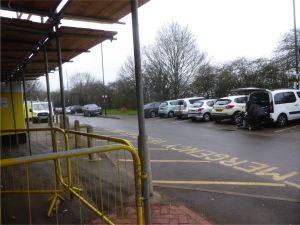 Out into the drizzle and surprisingly cold breeze, and off on a limp down Winchester Street.

At least the tootsies were not stinging for once, now that Sue had rubbed in the oil, whatever it is into my plates-of-meat.

Duodenal Donald was giving me some hassle, and Inchies Lesion was stinging somewhat.

However, Anne Gyna only gave me pain on the uphill bits of the walk and dissipated minutes after I started downhill, and Hippy Hilda was very good to me.

I had to push myself a little more than I wanted to, to make sure that I arrived at the Sherrington Park Medical Practice on time.

I arrived at the surgery and booked in with the Obergefreiteress receptionist.

As I started to sit down, Arthur Itis suddenly started giving me twinges in the right knee.

I filled in the DVT card and got the crossword book out, but before I could start on it, the nurse came out to call me in. I was tickled-pink and over-the-moon; It was nurse Nichole! This surprise bucked me up! We had a chinwag while she took the blood, I gave her the box of chocolates I’d been taking with me for weeks to the surgery in the hope it would be Nichole on duty, thanked her and with renewed faith, I said my thanks and farewells. I handed in the bag of nibbles for the others at the reception, and asked about the haemorrhoid cream and should it have been in the prescriptions. The lady looked it up and found that the Doctor had only prescribed the one tube and not placed it on the with the monthly supply of medications. So, I asked her if she could see if Doctor Vindla would make it monthly for me. I thanked her.

Then I departed. As I was going out onto the pavement on Mansfield Road, this Herbert of a Nottingham Pavement Cyclist was pelting down the hill, and it was as close as I’d ever been without making painful contact with the naughty boy and his bicycle, without actually colliding.

It felt like it had got a lot colder while I’d been in the doctors. I went to the bus stop and caught a number 58 back into Sherwood. Again I had to sit on one of the side-saddle seats but had far less bother in getting back up still today.

As I got off the vehicle, I spotted that yet another shop unit had closed down in Sherwood. An estate agent this time.

Unexpectedly, the feet started humming as I crossed the road to go into the Wilko store.

Then hobbled (I could hardly believe the pain from the toes?) up to the bus stop.

I was beginning to feel weary, at first, this caught me off-guard. Then I realised that the late appointment for the blood test, and accepted the situation.

No other residents were at the bus stop, not any on the bus when it arrived. I got an exclusive ride up to the flats. When we got there, only three tenants got onto the bus.

By the time I got up and into the flat, I felt right jaded and bushed. I got the nosh sorted straight away.

I had the last Cumberland Pie with extra cheese, and sliced tomatoes added, and three potato cakes with cheese added too. An orange, lemon dessert and two bread thins. It didn’t look appealing, but I enjoyed it. Rated at 9.1/10. 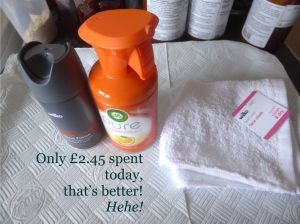 Washed the pots and put the things I’d bought away.

I did the Health Checks. Then got settled in the £300 second-hand recliner, with a mug of orange juice, to watch some TV.

I got as far as the first set of commercials, and was off into the lad-of-Nod!