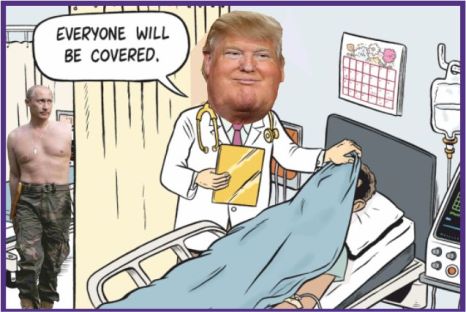 0325hrs: Duodenal Donald greeted me on waking up. No signs of nocturnal nibbling or somnambulation found. No pandiculating risked. I waited for the brain to engage with the limbs, and extracted my body-mass from the £300 second-hand recliner and off for a wee-wee; A long wee-wee. 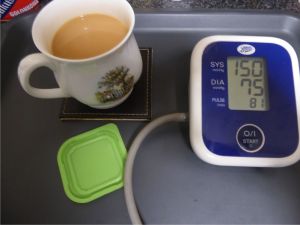 Then I guzzled endless amounts of the unfructuous antacid medicine, and took an extra Codeine 30g with the morning doses, to try to counter the nagging pains emanating from Dangerous Duodenal Donald. Hehe!

The readings looked all good to me.

Back to the wet room for another wee-wee of long duration. 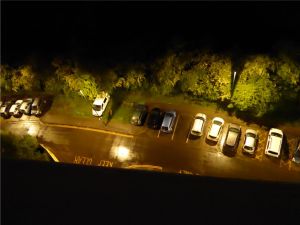 Outside was wet from the obviously heavy rain during the night. But only the odd spot or two was falling now.

I remembered the Morrison order was due for delivery twixt 0600 > 0700hrs.

So I got the computer on and updated the Wednesday diary. This took me up to 0430hrs. When I made a start on this blog and did the comments, and then did some WordPress Reader reading.

0440hrs: Started the ablutionalisationalistic activities. Being so early and not wanting to disturb my neighbours, I had a stand-up bath at the sink. Medicationalisationing attended to. Bit of a long job sorting out the fungal lesion, Tsk!

0545hrs: All done. Got the nibble box and raffle prizes in the bag and made a brew-up.

Went on Facebooking to catch up a bit, before the Morrison delivery arrives. 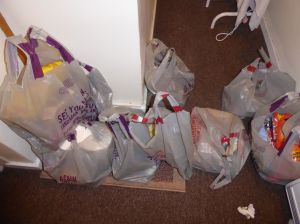 Very disappointed in myself. I got the order wrong and received several items I did not want. Chocolate Coconut Cups, Morski Cheese block, a giant bag of Kettle’s Crisps and a jar of Onion Chutney? What an Eizel!

The dried lemon-grass in a jar arrived, though. 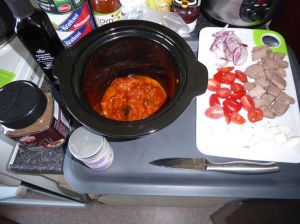 I’m making a stew or soup of some sort today for my nosh.

I prepared it all and got it cooking in the crock-pot. Chopped some turnips, sliced some mini tomatoes and red onion, cut up some beef; and added it all to the tomato and mushroom cooking sauce. For flavouring, I tried Caramelised gravy, onion salt, Balsamic Vinegar and a stick of the lemon-grass. No idea what it will all taste like, but here goes. Haha! I put the slow cooker on Auto-setting.

Put the grocery things away, and readied the black and recycling bags to go to the chute when I go out, and collected the empty glass containers, bottles and jars and washed them ready to take to the bin on the way to the Social Hour. 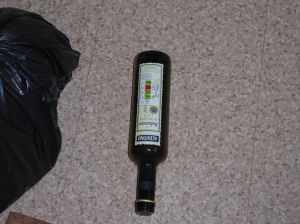 I managed with little or no effort, to knock the just cleaned Balsamic vinegar bottle off of the counter. It bounced on the floor, coming back down from the rebound on one if the black bags waiting to go out, spun off as it landed, rolled into the cupboard bottom and stopped near the refuse sack – and – It did not break! Hows that then? A bit of luck! Now I’m worried about what will happen when fate gets its revenge on me for this little bit of good fortune! Hahaha! No need to quaeritate about this happening later, it always does to me! 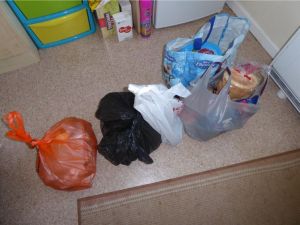 Made sure I’d got the nibble box, raffle prizes and in one bag, the glass in another, and the waste and recycling ones, too. Blimey, It looks like I’m going on holiday instead of to a Social Hour. Hehe!

Set out, took the waste to the chute, down in the lift and dropped the glass in the recycle bin as I left the flats. 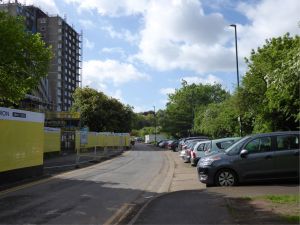 There was a brisk breeze in the air as I set off walking down Chestnut Way to the temporary Hauptsturmführeressess HQ and Social shed. It was not cold in the least.

The Willmott Dixon lads were busy working away, especially on the new centre block of 44 Extra Care units and Warden’s HQ. 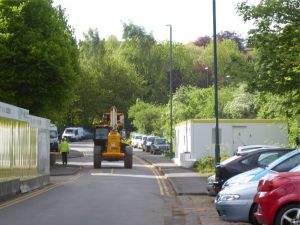 The plant machinery was milling around. Other than these activities, there was little in the way of any human life or observable movement.

The mind trundled off into a derestrict thinking mode. By the time I arrived at the hut, I was in a confused state and found it hard to concentrate on anything, and in a niggly mood for whatever reason.

Had a natter or two: well a few words with Jenny, Cyndy, Mo, Frank, John, Doris and William and BJ.

Put the prizes on the trolley for the raffle. Bought two tickets. Took the nibbles around, then gave out the raffle numbers and settled on a seat and got the crossword book out. With the help of BJ and John, we got a few more answers in, but not many. 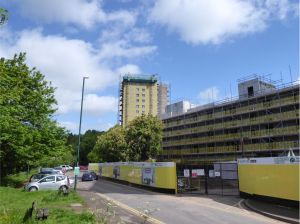 The hour was soon all over. As I left, I took these p[hotographs of the flats.

The new centre build is a lot larger in real-life than it appears on the blueprints and various posters and signboards.

I could hear the lads inside the compound grafting away. 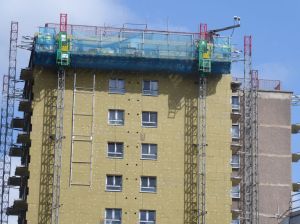 Then took a zoomed-in shot of the chaps doing the dirty great large sign-support preparations on the side of the Woodthorpe Court block.

Cyndy, Doris and John caught up with me before I got there, and we all moved into the elevator. Cyndy organised who lived on which floor and got us inside in order.

I got in and had a wee-wee.

Then as I emptied the bag, I realised I had not given Cyndy the shower-gel I promised I would last week. So I took it up to her and Eric’s flat on the fifteenth floor. I was invited in to view their new curtains. They do look good the way they have laid them out, I must say.

Said my thanks and cheerios and came back down to 72.

Did the Health Checks, made a brew and got the computer on to update this post.

A Willmot Dixon chap arrived to do the board at the bottom of the bay inner window, and to put one over the gaping hole on the left hand of the frame of the balcony doors. Glad I didn’t go out now.
I pointed out the other needs, and he phoned into his boss, and this got some attention quickly, bless him. 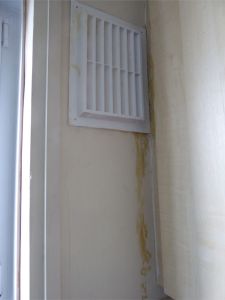 Five minutes later another young chap arrived to see to the kitchen vent.

This is how it looked after he had tended to it and left.

Ten minutes later the plasterer arrived to do the missed off on his last visit holes around the kitchen window.

I worked on this diary while they were all grafting away.

The kitchen man I didn’t see again, but I wasn’t looking for him.

The plastic chap explained that they would not be doing the bottom pelmet repairs because Nottingham City Homes had refused to pay for it to be done. I asked him if this was because it was Willmott Dixon men that broke them in the first place? He wisely did not give me a direct answer. Nice lad. Below is a before and after photo of the damaged pelmet. 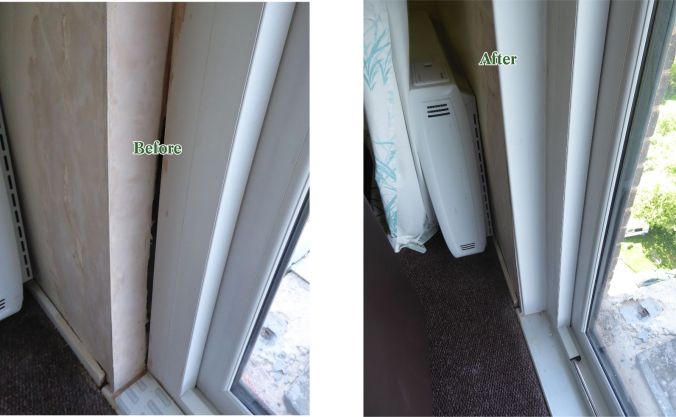 They all worked away swiftly. Soon the plastic lad departed, offering his farewells.

I started to clean up after their correctionalisational visit to get my apartment sorted out. 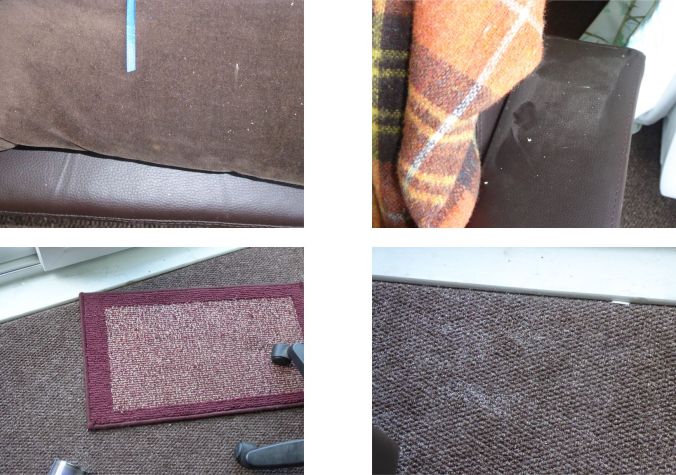 Then the plasterer bloke shouted through to me that he was all done and leaving as well. He left a far less hole-filled scene for me bless him. And he filled in the holes in the lower wall from where they moved the storage heater, I thank you.

All three departed within minutes of each other – it felt lonely in the flat suddenly. Hehehe!

Within minutes of their leaving, I checked the hotchpotch in the crock-pot. It was almost ready.

I updated this post up to here, then got on with the Health Checks and got the stew, casserole whatever it should be called, served up. 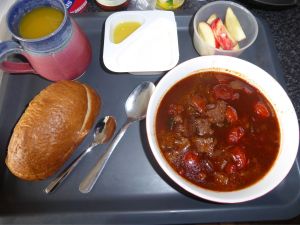 Got the pots washed up, did the last checks and got down in the £300 second-hand recliner.

No visits from Dizzy Dennis this evening, however, Colin Cramps gave me some bother in the left hand, contorting, twisting and hurting the poor fingers for a good while.

Turned on the TV, to watch a Heartbeat episode. I nodded off expeditiously and appeared to go straight into a dream, that seemed to last for days! I was in an underground cave,  wearing only underpants and bright coloured underpants and socks. Searching for my hearing aids. There were pipeworks in some of the caves, and I never did find the hearing aid, but did get lost. I can’t say it was a scary nightmare, but it seemed to drag on forever and, I reckon I said to myself in it, “I’m fed-up with this dream, boring… please let me wake up before I die of boredom…”, or words to that effect. 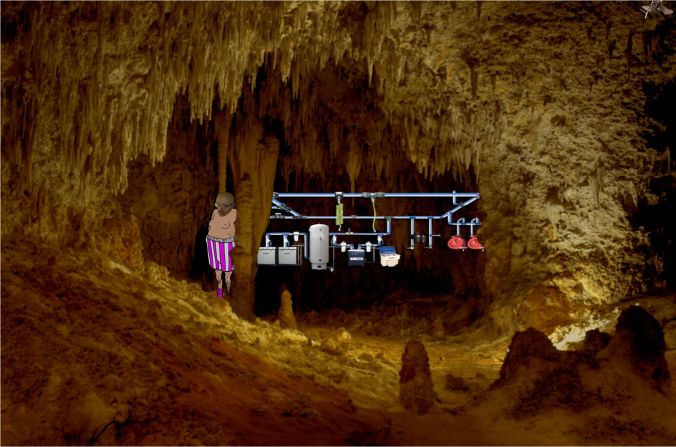 When I did wake up with a start, only a few minutes had passed?

I scribbled some notes down about this dream and nodded off again.