0338hrs: Woke, after having an odd night of weird dreams. With the EQ bearing a definite suspicion or anticipation of something adiaphorous being in the air and imminent! I hope it does arrive, it will be early as opposed to late-on, or I’ll be fretting about it until it does occur.

I noticed some notes on the scribble pad, I’d recorded bits about the first of last nights dreams. As I positioned my ever-getting more gargantuan body to get out of the £300 second-hand recliner, signs of much nocturnal nibbling became apparent. Chocolate and yoghourt covered peanuts, some melted and stuck to my stomach, leg and the cushion were cleared up, crumbs of an unknown origin on the recliner, and bits of nuts stuck in between the few teeth I have left. Oh, dear! Naughty me!

Off for a wee-wee, washed-up and made a brew, then got on with updating the Thursday post.

After getting this finished and sent-off, I got the summons to the Porcelain Throne, a little later than usual. All good though! 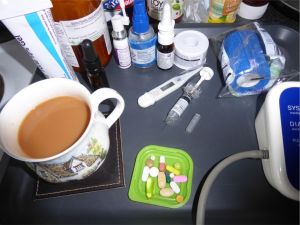 The ailments seemed to be a kind to me. Even Duodenal Donald was in a good mood this morning.

Hippy Hilda too, Reflux Roger, Hernia Harry, and Craig Cramps. By gum, all this was nice. But somehow it also concerned me.

I did the Morrison order for next week.

I went to make a replacement mug of tea for the one that I’d let go cold.

As I took this picture, it dawned on me that the shadows from the new build block are going to have an adiaphorous effect on flora and fauna across the road; by preventing the sunshine getting to them. Poor things!

Closed down the computer at this stage, and got

the ablutions tended to. All done, and out to the Oberfeldwebeless Wardens Deana and Julies, Hauptgeschäftsstelle hut.

The wind was a lot sharper this morning. Had a walk around the back of Woodthorpe Court to take this photograph

This show you how busy and such a lot more work they have to do yet.

Got to the HQ shed, and had a good natter with those in there also waiting for the bus to arrive. Cyndy, Roy, and Welsh Bill amongst them. When the coaches came, I mounted up and sat in front of Cyndy, bless her cotton socks, she helped a chap from Winchester Court to get on the bus. ♥

Dropped off on Queen Street and hobbled straight down to the slab square and caught a tram to the Asda store in Radford. As I arrived on the platform, the transport got there seconds later!

I’d gone to Radford Road Asda (Walmart) to search specifically for some Nordic Style Boczek Polish cooked bacon with herbs, (Which is so flavoursome one can become addicted) Their own label BBQ Sauce (Which tastes marvellous!), and their seasoned sliced potatoes.

I got a new ailment come on around this time. I don’t know if it is connected with Reflux Roger, but when I breathe in sharply or deeply, I’m getting one heck of a sharp pain on the left side under the arm and chest? Of course, Roger Reflux was playing up at the same time, so there are plenty of sharp intakes of breath! This, I do not like, and it has stayed with me all day.

I had a lot of luck shopping today in Walmart, though, I got all three of the things I went there for; And a small fresh turnip, sliced onions, baby yellow peppers and some suitable nibbles on special offer. £13.23 spent at the self-serve checkout, where the assistant only had to help me out once. Smug Mode Adopted, Hehe! 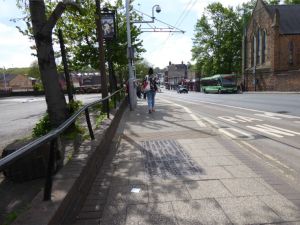 I walked to the tram stop opposite the closed-down Church, and the tram arrived within seconds. Doing well here!

Talk about ‘à l’opposé du spectre,’ compared to the almost empty transport from town, this one was cram-packed! It got even worse when the tram got to the university stop. I thought this amount of people might cause the tram to break-down! I gauged there must have been around 400 passengers on it at one time. It was such an event, I wanted to photograph the mob of Nottinghamian’s with their mobile phones, but there was not room enough for me get the camera out of my pocket!

By the time I’d got my camera out, the alighting passengers had scattered.

The tram is pulling out in this photo.

I’d made a mess of the timing, and had got 55 minutes before the next L9 bus was due to lift me home.

, really here. Because it meant I decided to call in the Poundland shop. Then, I stupidly spent even more, in buying a case for the new Lumix! Tsk! 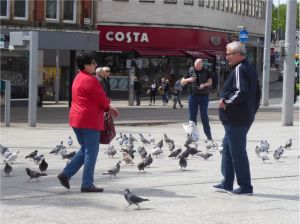 What appeared to be a visiting family group in the Slab Square, they sounded Polish to me, were enjoying themselves taking photographs of each other. They were keeping alert and looking closely at everyone that went near them; So I assume they had been warned about the Nottinghamian’s little habits, like pickpocketing, mugging, etc. and wanted to make sure no one stole their camera, perhaps? As I got near, I gave them a smile and a thumbs-up. They returned a big smile and their own thumbs up. A man who was with them said: “Thanks gadgie, they divvin’ speak any English.” This gentleman spoke with a Geordie accent. (I think?)

I continued with my superfluouscity of spending pointlessly and relinquished any odd bits of common sense still lingering within my mind, and went to the Poundland Shop for anothe

r bout of spending on supererogatory foods. I ended up buying six packets of stuff for the nibble-box, and two packs of biscuits for myself (Rich shortcake and a Lemon cream cheesecake ). Also two fresh-air sprays. £7 spent.

But, I did manage to operate the self-serve till without any help needed. Double-Smug Mode Adopted Hehe!

Still, some time to kill, s

o I limped over the square and along Long Row and left up Clumber Street, and foolishly called in the Jessops Camera store.

Came out £19 worse off and so annoyed with me! £19, for flipping canvas camera case, Cor Blimey. Worra Schlemiel!

I paid while resisting bursting into tears and

I meandered to Queen Street, avoiding the Nottingham Pavement Cyclist.

On Parliament Street, I spotted two Nottingham City Police cars, with the officers chatting to a bloke on the pavement and laughing. I was suspicious as both officers gave me a look of contempt. Why?

Caught the bus, not many on it this trip, and no one that I knew. I feel sure I would have fallen asleep, but for the Jame Hunt inspired bus driver clogging it a bit.

I did try to do a crossword, but the book pages fell apart. Humph!

I fought against nodding off all the way after that but was successful. When I got off the bus, I popped into the Hauptgeschäftsstelless Wardens/Social cabin, to see if the wonderfully priced £3 two-course meal was going ahead or not. As it was dead on time, for the start time. I opened the door, and two volunteers who were providing the meal were talking to the tenants who were sat with the cutlery all laid out on the tables. 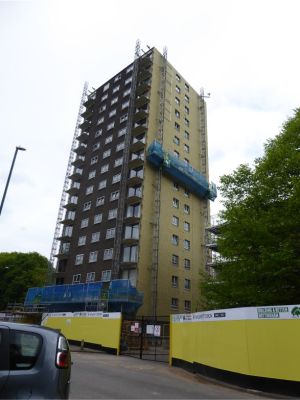 The looks I got from them all was not encouraging or welcoming – So I walked through and out the door at the other end. £3 lost here. No problem though, it goes to the Scouts, I have no problem with this. But if someone had told me it was going ahead, I would not have gone out to spend even more money, would I? Anyway, I wasn’t too bothered, as I planned to have seasoned potatoes and salad later, with Pork Knuckle. Yum!

As I plodded back to the apartments, I could see the Willmott Dixon lads working in one of the hoists. It looked to me like they had finished, or were finishing off the insulating on that particular wall. 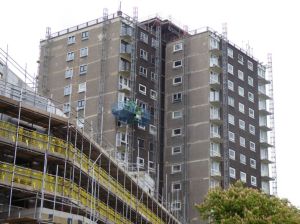 I turned back to take a snap of the workmen doing Winchester Court updating.

The pains in the chest underarm were a bit persistent still.

As I got in the foyer doors, Doris, my neighbour, joined me in the lift. Nice lady! We had a good

nattering session, and she noticed me suffering from the breathing heavy. Told me to knock on her door anytime if I need help. I thanked her and went in the flat.

Did the Health Checks and took an extra painkiller, had a wee-wee and the chest still giving out unexpected kicks, it is now doing it when I am breathing normally?

I wish I knew what was causing this.

Took a shot of the camera bag I hung on the window handles. As you can see, there is still no precipitation, despite it being forecast for this evening.

Got the kettle on and took a look outside. The poor whoever it is, in the white care was up and down, up and down searching for a parking space.

I put the fodder away and got the oven on to do the seasoned sliced potatoes later.

I started to update this page. By golly, it took me hours to get as far as this. The lack of concentration was helping me to make more syntactic and morphological mistakes than I have ever done before in one sitting.

Did the Health Checks, the sphygmomanometer needing four attempts to get it to operate for me.

Then I got the seasoned sliced potatoes; that had been in the tray getting dried out now, for hours, into the oven at last.

The nosh was a little large, and I left a lot of I but enjoyed the bits I ate. The pork knuckle, Aldi hard cheddar, and yellow tomato sandwich were all tasty.

I think the new stabbing pains may be linked to the back pains of late. I started to get both back and arm/chest pains now. Maybe its a development of some sort from Anne Gyna? This always happens at the weekend when no Doctor to ring.

I did the washing up and had a wee-wee.

Settled in the recliner and put the TV on. But sleep took an aeon to arrive, and tornmenting dreams arrived to really get my goat; cause I could not remember any details about them. Only a perception that were of a very frustrating nature or theme.