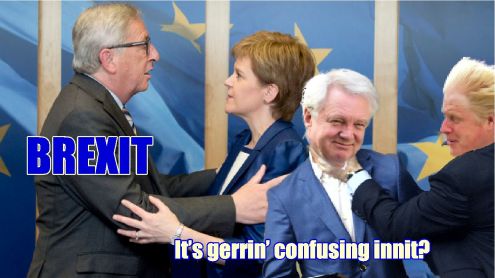 0038hrs: I awoke, and automaton-like, I went for a wee-wee. Nae bothers, getting out of the £300 second-hand recliner. No signs of any Evil ironclad boll Weevil black biting beetles in the wet room.

Took the washing down to the laundry room and got it going.

None of the other three machines was in use.

I nipped outside to take a shot of the metal-maze outside the foyer door.

Back up to the mini-apartment, and got the Health Checks done.

The sphygmomanometer took three attempts before it worked. I wonder if it’s getting time to buy a new one?

Sys and Dia were down a bit, which I thought was a beneficial thing, pulse up a tad and the weight the same as yesterday… which was still too high. (Shame Mode Adopted).

Took the medications with some spring water, and set about making a small mug of tea.

Got the Computer on… 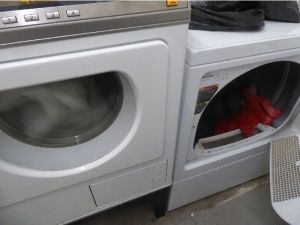 0150hrs: Down to move clothes from was washing machine to the dryer.

This meant I had 40 minutes to wait to get one myself! Nipped up to add this comment to the diary, then went down to await the guilty culprit to remove their togs so I could dry my gear. Grr!

The lady appeared, all calm and not bothered about what she’d done to me. Ah-well!

Got the dryer going, had a natter with her and gently mentioned about her transgression of the house rules. I don’t think it will make any difference.

She collected her bits from the second dryer that I had taken out and folded for her.

Back up to the flat again, and set the timer to remind me to retrieve the washing later when the machine had done its job.

Time to go down again and collect the clothing.

I’m sure that the dressing gown is getting bigger each time I wash it? Hehe!

One of the long-sleeved shirts I bought from the Sports Direct shop and worn for the first time, now has a hole in the middle of the front of it, that looks like it has been frayed? I dumped it in the bin.

I mentioned about someone using the waste chute at 0625hrs the other morning, although it didn’t bother me cause I was up and on the computer, but, the rules are not to drop anything down until 0800hrs.

Well, as I suggested might have been the case, a tenant was woken up by the noise and had written a note for the offender on the notice board. Good for them!

Home again, I put the clothing away and made a mug of tea. Then on to the computer, now working, but slowly, again.

Caught up to here on this blog, and then updated yesterday’s waffle. Trying to post the notification off on Google Email, and guess what?

I’d like to take this opportunity to thank Mike Fries, Chief Executive Officer and Vice Chairman of Liberty Global, the largest international TV and broadband company in the world. Who has to survive on a pittance of only a  $111.9 million salary. And still cannot manage to supply those who pay his company more and more for a crap, pathetic service. Cheers mate! May you fester with carbuncles and catch the Coxsackie Virus.

Went on CorelDraw to do some graphics for diary page tops.

Tended to the ablutionalisational activities next.

0800hrs: Then I took the six black bags of rubbish to the waste chute.

Sorted out the nibbles and prizes for the Social Hour – Yes, its back on again now!

Back on CorelDraw, until the food delivery arrives.

The fodder arrived, got it stored away and put some with the raffle prizes and nibble box.

Took a bag for the recycling collection on the way out. Half-way along Chestnut Way, and realised I had not got my camera with me. Huh!

The door into the Nottingham City Homes, Winwood Flats, Unterscharführeress Wardens Temporary HQ. Willmott-Dixon workers breakfast and tea-break room, Sarcasm & Insult distribution area, Tenants Socialisation Shed, Telling Inchcock off Zone, Things like crockery and pottery to be stolen from, and residents hut near the door was closed off for the Willmott-Dixon sub-contractors to be able to carry on digging for the electricity supply cable. No photo, of course, Grumph!

I went in through the far end door. A lot of folks in there early today. Having missed a couple of meetings due to circumstances beyond our control, the clan seemed to be really enjoying it this morning.

I was so pleased to hand Jenny a  loaf and some Lemon Cream Cakes for her and Frank, and thank Jen for the Scottish Shorties biscuits she got for me.

Put the raffle prizes on the trolley. BJ was there, helping out with the raffle distribution. Cyndy and Margaret were in good form. I walked around rather than sat down, cause I could tell the fungal lesion was haemorrhaging.

Handed round the nibble-box, and had the odd chinwag.

Cyndy gave Jenny some chocolates and flowers in thanks for all her efforts on our behalf.

Then, I felt the PPs filling up, and had to leave early to get back to sort things out.

As it turned out, the bleeding was not too severe, but with it repeatedly leaking, some congealment meant, when I got in the apartment, I had a difficult time cleaning things up and medicating again.

I got caught up to here on this blog and decided to go to the chemist to see if I could buy some alternative to the Daktacort cream. 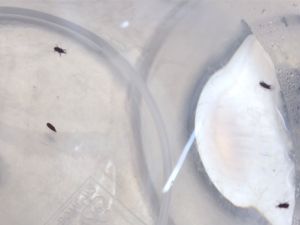 As I checked the taps were off, oven off, crock-pot off, no lights left on and so on, I spotted the first of the Evil ironclad boll Weevil black biting beetles of the day, on the kitchen floor.

I thought every one of the weevils was dead, and wet my finger to pick them up and threw them in the small washing bowl which was in the sink, full of hot water and caustic soda. The dang varmint 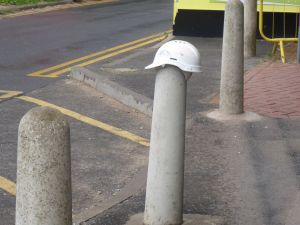 I had a few laughs with Mo and another lady. As I got out of the lobby, I saw this helmet left on a bollard, and thought, by gum, the Willmott-Dixon lads are working so hard they’ve shrunk! Haha!

Back in a bit folks. TTFN. 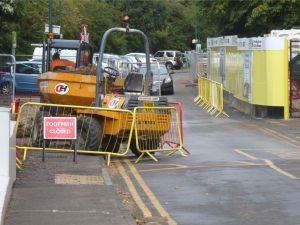 I hobbled along Chestnut Walk, though the life-threatening conglomeration of barriers, no footpaths and plant vehicles and cars intimidatingly lurking about.

A little drizzle was in the air.

It wasn’t cold at all, and the rain soon gave up falling.

I limped down the Winchester Street Hill.

A bit of a vehicular kerfuffle at the junction lights with Mansfield Road, caused by a dodgily parked lorry.

Turned left to Boots to see if they had anything like Daktocort Cream over the counter. Nope! So then I asked them if they could take the used hypodermic needles from me and dispense them safely for me.

The look I got back; that said to me: “Are you an idiot, how dare you, Dummkopf!” Followed with: “No! You must take them to your Doctor!” I left like giving a Nazi salute and saying “Ja, Mein Obergruppenführer!” and clicking my heels together! Tsk! I left feeling apathetic rather than insulted or annoyed.

Got to the Continental Food Store and searched for some of the lemon flavoured soft pastry slices with cream. Luckily they had some, so I got two packets, along with a turnip, Worcester apples, a tomato and a small loaf of bread.

Then ambled up the hill and called in the Wilko Store. Got some of their Yim-Lang (or whatever it is) scented fabric softener. Flipping thing had gone up in price.

Went to the Co-op store for a look around, as I had plenty of time before the number 40 bus was due. Didn’t buy anything.

Got up to the bus stop.

Hen and Penny were in the shelter. Lovely gals, I enjoyed listening to them talking between themselves and having a right good laugh.

Up the hill for two stops, and we all alighted and walked to the flats.

AS we turned the corner onto Chestnut Way, I spotted that Woodthorpe Court was having its new sign erected.

Well, partially anyway. The window lads came down on their hoist.

I zoomed in to take a closer look.

Hen and Penny had shot off ahead by the time I got the camera put away in my pocket.

They stopped to natter to a fellow tenant. Thus, I was able to catch up with the pair of treasures.

For a moment, the raindrops fell then stopped within seconds of starting.

We got in the lift, Penny got off first. Hen and I bade her well and cheerio.

Up to my floor and I alighted, bidding Hen farewell and good luck.

Got the kettle on to make a brew, and turned the oven up, ready for the seasoned potato slices to go in later.

Computer woke-up, and updated this page.

Nosh finished cooking and got served-up.

The Worcest apple’s flesh turned brown the moment I sliced them. But the bitterish-sharp taste of this variety made a nice change.

The potatoes I overcooked to perfection. (if that makes sense, this is how I love them, slightly burnt!)

The tomatoes were just a tad bitter, but acceptable to me. The pickled cucumber slices were hotter than I expected. I must remember to eat fewer in future noshes.

The continental bread Turkey meat bacon sandwiches were fabulous and wonderfully tasty! Overall, a 9.2/10 rating was given for this effort.

To the kitchen to get the Health Checks done,  and do the pots.

It was raining a bit, and I saw that the wonderfully artistic display of modern art that had accrued on the outside of the plastic covering, had lost even more pieces of mud, sand and bird-poo etc.

Into the £300 second-hand rickety recliner, where the regular concatenation of evening events did not materialise, (i.e. nodding-off-waking-nodding-off). Instead, thoughts, mostly from Memory Lane’s interminable catalogue of failures, frustrations and embarrassments, exasperated me by marauding around in the grey-cells box for hours and hours. Leaving me with precious little memories of .what I was pretending to watch on the Goggle-box!

It was almost outré, laying there with the brain doing what it wanted to, and that was wallowing in my inadequacies, failures and might-have-beens. Tsk!