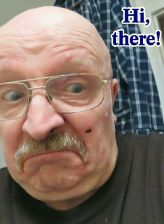 01:25hrs: After a good five-hours (Great!) kip, I blundered back into semi-consciousness, in need of a wee-wee. Got the stomach with its dangly legs and arms attached, out of the c1968 recliner, caught my balance, and meandered slowly, unhurridly, and with a new more acute vageness than I’ve had in a long time, off to the wet room. Took the reluctant weak wee-wee, checked on Little Inchies fungal lesion (No bleeding), washed the hands, and made my way to the kitchenette.

The ambiguous, ambivalent brain, at first, sort of went along with what the body was doing, uninterested. It’s the best way I can express how things were at that moment. I was not wholly under the control of my thoughts or emotions at all – ideas, views, fears were milling around now in the head, but I was losing then as quickly as they came?

By chance, at that moment when I was getting the milk out of the fridge for the Glengettie, I spotted the moon was out and on display.

Things seemed to click back together in the bonce, and enthusiasm returned.

I fetched the Nikon camera, opened the unwanted, unliked, thick-framed, light & view-blocking new window, designed by some elderly people-hating gerascophobia or misogynist, and took these three efforts of the moon in the sky.

Cheered a smidgeon now, I got some potatoes out, got them in the crock-pot and

added some Squid juice to them, and put them on a low setting.

I got the Health Checks done, as the Thought Storms began to come (I’d missed then overnight-Hehe!). The SYS is still a little high.

Well, well, and fancy that! The temperature was higher than it has ever been, at 37.6°c. I didn’t realise the read-out produced a changed colour when the figure was out of safe range, on the new thermometer. It has always been a shade of green since I’ve been using it, but not today. It’s gone to orange, next step red, I assume?

Something else to fret about. Just when Ann Gyna and Duodenal Donald were being in a good mood with me this morning (up to now). In fact apart from BPB (Back-Pain-Brenda), who is still enjoying her sadistic ache-giving pain distributionalisationing, things ere so good. I’ll have to ask Mr Google about this… hang on a second. – Oh, well, I didn’t know that! Mr G says A 75-year-old male – 97°F (36.1°c) to 99°F (37.2°c). So, it’s not too far out, is it? Tsk! 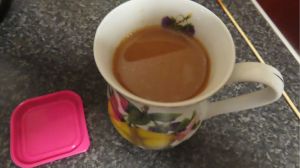 I made another brew of tea for the one that went cold, and I got the medications pot. Oh, dear, I’d done it again! I’d not taken last nights doses! No wonder BPB is moaning! So I took the belated ones and got the morning tablets in the pot read to remember to take later on.

Naturally, I was full unequivocal confidence that I’d remember (I stuck a note over the top of the computer screen, Hehehe!) to remind me to take them. Ahem!

After a few hours of updating the Tuesday IT, I got the urge for the Porcelain Throne. So, off to the wet room. Fantabulous Session again! A 2-0 win for Trotsky Terence against Constipation Konrad. Smoothly evacuated with minimal pain, quick also too! Only the mess that needed cleaning up was any bother.

Back to the computer, and seeing the note I’d left for myself, I remembered to take the morning medications. With Trotsky winning the battle of the Throne, I was unsure if I needed to take any more of the Dioctyl® poo-softener capsules or not. After some vacillating and dithering, I decided that the thought of going back to the concrete torpedoes was scarier and painful than the embarrassment of my messing my PPs. So, I took one. But was still not sure if I’d done the right thing.

Come think of it; that could be an outstanding, and suitable epitaph for me when I snuff it, “He was never sure if he’d done the right thing!”, for on the coffin, like? Yes, I like it!

I went to check on the progress of the potatoes. I’d not turned it on at the power socket. So, I did. I do feel such a fool!

I finished the updating of the blog. Nicodemus’s Neurotransmitters and SSS were both surprisingly calm with me? Bless ’em! I Pinterested some snaps. Then did the Facebook catching up. Emailed the link. And went to get some brekkers made.

A BBQ pot noodle, and the remainder of the Wholemeal Irish Soda Bread. I made some gravy to add to it, and some Squid vinegar.

It came out so nice and tasty, rich- flavoured. And I so much enjoyed it with a mug of Thompsons Punjana tea. I’m getting used to this having breakfast now, as instructed by my Doctor Vindla, and the After Stroke team. I must try to eas a smaller afternoon meal, though. The Chilli-Con-Carni and or meatballs are going down well, with a little seasoning.

I went to investigate a noise I heard, from the kitchen methinks. I took the pots to wash at the same time. I could not find the cause of the clattering sound, though? I took a picture through the window. It looked eerie, and a bit like an Alpine Village?

I got a call from my Gastroenterologist, asking how I went on with the pads she’d sent me to try. I was frank with her. I told her that using these pads meant wearing normal underpants, that needed pulling up so tight with the braces, that on the two occasions I tried using them, Little Inchies fungal lesson started to bleed. And the pain of treating it, due to my phimosis problem, applying the steroid cream to stop the bleeding, was too hurtful. Three times she said: “So you prefer to use the protection pants you are buying? Each time, I replied ‘No, not prefer, but have no choice, to protect myself from bleeding!’ Each mention, added; ‘We cannot supply protection pants for you!’ On my initial consultation with her, said this five times. On her last progress call, six times.

I think I’ve got it now – They cannot supply free PP’s for me. Hahaha!

It’s still a little gloomy and dark outside. I got the nosh.

I got the CCC in the pan, added some gravy and a drop of Balsamic, and Soy sauce added to the mix.

Then checked on Jenny’s email and replied to the angel, in between getting the evening meal prepped. 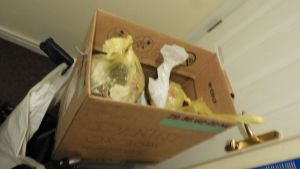 I’m trying to keep up with the waste bag situation. I use the old PPs box, and this makes it easier, cause I can add the tiny bags to it as I make them up. Then, when I struggle to the waste room chute, it is easier to get them from the box on the trolley-guide down the chute.

Despite my habit of trapping my fingers in the lid, having a dizzy, misjudging distances and gathering scars and the worst at times; when the malevolent, diabolical, involuntary right-leg (Tim Price from New Mexico named) Neuropathic Pete’s (Drop-what-your-holding), Schuhplattler dance bursts forth, and the leg flails about, gathering bruises and cuts, and encouraging fear and naughty language.  Doing it this way, there is no chance of any blockages in the pipe.

The nosh was served up. Note the lack of any bread? I’d ran out! My eating all the soda bread loaf in two sittings, and forgetting to either take some out of the freezer or put a part-baked roll or baguette in the oven… Well, I did actually put two small rolls in the oven… Maybe next time, it will be better to turn the oven on first.

The Chilli-Con-Carne was on my limit, hotness-wise. This should keep things moving in the Porcelain Throne area. Har-har! A 7.8/10 for flavour rating.

Shame about no bread, but to avoid further cock-ups of this nature tomorrow, I got a packet loaf of Milk Roll bread from the freezer when I did the pots.

Sleep, even this early, I needed, and it soon arrived, off into the land of Sweet Morpheus.

The landline rang and flashed, and a feeling; a sort of, “Ah, I wonder who that is?”arrived. I felt almost sure it would be the Deep Vein Thrombosis, INR Warfarin results and new dosages nurse. She hasn’t rung me for over a fortnight now.

I struggled up out of the c1968 recliner and stubbed my toe on the chair leg.

I think I silently muttered something like, “Whoops!” Ahem!

It was Obersturmbannführeress Housing Patch Manager and Pole-Dancer, Angela. She has a good clear voice when not speaking too fast, so I heard most of what was said. My replies were affected by Stuttering Stephanie, but this lady knew and replaced every word I was struggling to get out, for me.  Clever gal!

She asked about how things were, gave me advice, and showed a genuine interest in my plight. Thank you, Madam!

I had a wee-wee and somehow remembered that I’d not taken the evening medications. Got the dosage pot, back to the recliner, and painfully seated on Harold’s Haemorrhoids. and the Thought Storm raged.

Again, I forgot to take the medications! – but I did when I woke and got up, just after midnight… with Arthur Itis giving me unexpected agony in both knees? Oy Oy, Oy!

7 thoughts on “Inchcockski – Wed 25 Nov 20: My memory was malevolently-masticated, with maladroitness! Mmm?”