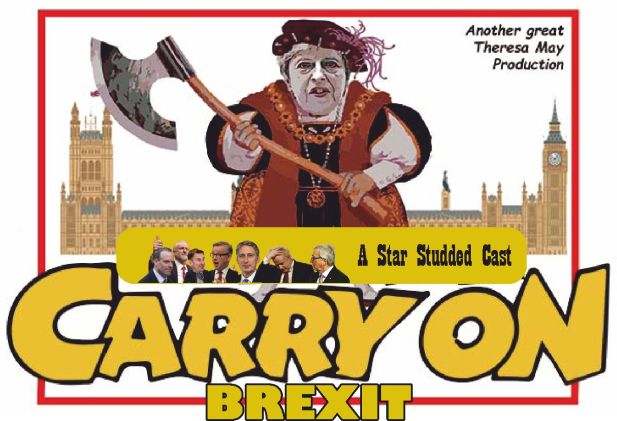 0030hrs: I woke in a non-adiaphorous, semi-healthy condition physically. But a tad feeble and fragile cerebral-wise.

The only concern physical, was the change in the mysterious… er, erm, whatever it is, that I spotted last night, growing to the left of the tibia, in my left leg below the knee?

It has gained an artistic colouration around the outside of it now. I wonder if the Tate Gallery would be interested? If they can show a stack of house bricks as art, as they did in the Bricks Display controversy of 1976, when my leg, I believe, is far more genuinely artistic than house bricks?

On closer inspection, it still looks like it could be an evil ironclad Boll-Weevil black biting Beetle that has dug itself into the flesh. (Only joking, but it does look a little like one, Haha!) The fluid retention in the leg has gone down somewhat; has the giant Weevil been drinking in there? LOL!

The mind decided not to go off on one of its roundabout mixed thoughts and fears tours this morning.

I spotted the note I can’t remember leaving on the TV screen, to remind me that the Morrison delivery is due twixt 0630>0730hrs, Foot Lady Sue at 0900hrs and the Winwood Social at 1000hrs.

Out of the now working £300 second-hand recliner again to the kitchen, and tended to the Health Checks. 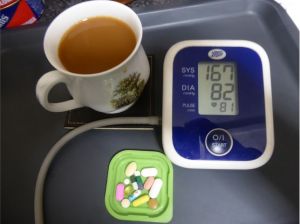 The readings were all similar to of late, apart from a further increase in the weight. Tsk!

The summons to the Porcelain Throne arrived.

A somewhat messier evacuation than of late, and a bit more liquified. So a Dia-Limit capsule was taken with the morning’s medications.

I went on an evil ironclad Boll-Weevil black biting Beetle search, in all three rooms. Finding only three alive, but dozens of dead ones, all smaller ones.

Unfortunately the biggest beast I found alive, was running up the clothing on my coat rack! The spray was utilised, both Rentokil and the Raid ones, all over the place, everywhere. Danged varmints! I can see some stuck, dead and alive, on the outside of the unwanted light and view-blocking new windows, on the inside of the plastic covering left on them. Evidence methinks that they did come from outside in the first place.

I had a wash and shaved etc. early, a stand-up naturally, I do not want to disturb the other residents so early with the noise of the shower and drain.

Got on with finalising yesterdays diary and got it posted off.

As I began this update, the Morrison chap arrived at 0725hrs. I put the things away. They had substituted the Potato Rostis with Roast Potatoes. No print-out was left, so I do not know if they charged me right or not. Ah, I found one on the email, sorry. I’ll ask Sister Jane to complain and explain that I am getting fatter all the time and should not eat roast potatoes as they are a lot fattier than potato rostis! Hahaha! I was going to send them back but foolishly accepted them. Ahem!

Got the stuff put away, I now have a cram-filled fridge and freezer once again.

Carried on with this update. But, oh dearie me, the internet went all dead-slow on me again!

About half-an-hour later it came on a bit better, just about manageable. I am a Schnook!

A little later, from outside, sounds that were dead ringers for the what the wheel-tappers made in the 1960’s started. Of course with the mind not having its little wander earlier as it usually would, it went off bringing so many memories back to me, of those far-off days. Not that they were happy, but one tends to be selective and search for odd not-so-bad times, doesn’t one?

I made next weeks Morrison order up while waiting and hoping that Foot Lady Susan would not arrive late and block my getting to the social hour.

.. She arrived late. Tsk! Told me she’d try to phone me last night, but she rang too late to catch me awake, to inform me she’d be coming late today. Not that it would have avoided me getting to the Social Hour late, anyway.

The gal did my feet, and much better they felt afterwards. I paid the lady and set off belatedly to the Social Hour. 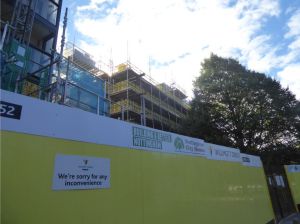 Despite being in a rush, the morning sunshine, clouds, and Winwood Heights deserved a photograph taking of it.

I got to the Nottingham City Homes, Winwood Heights, Unterscharführeress Wardens Temporary HQ, Willmott-Dixon workers breakfast and tea-break room, Sarcasm & Insult distribution area, Tenants Socialisation Shed, Telling Inchcock off Zone, Things like crockery and pottery to be stolen from, and somewhere to rest while waiting for the bus, hut. Where I got a round of applause from the tenants for being so late. Hehehe!

The raffle was just coming to an end when I added my two prizes. I handed round the nibble box and had a good few chinwags as I did so.

Jenny was looking good. BJ was there, back from his holiday.

Said my farewells and made my way back to the flats, calling at Roy’s apartment to see how he was going with his recovery from his operation. His better half and Roy were eating when I arrived, which made me feel a bit of a fool for not thinking about the time of day it was, that I’d called on them. I felt guilty about that. They were kind about being disturbed, though. Roy looked a bit better now, and his wife was seemingly coping well with looking after him, bless them.

Back to my flat, and saw the little cheque from the Inland Revenue that needed depositing in the bank, that I’d forgotten about earlier. So, I hastened out again with it in my pocket and set off on a walk down the hill into Sherwood.

Not realising I still had my reading glasses on, which proved a bit awkward seeing things. Humph!

This picture on the left,  shows the bright blue skies and local dwellings in the valley, on the corner of Chestnut Way and Winchester Street. The allotments being front below.

I made my way down the hill and spotted a new piece of Nottinghamian Street Art. It was located where the workers park their cars each working day.

I plodded on and was soon in the queue at the bank. Where, the wait, gave me time to ponder over the ‘Meaning of life’ and ‘Are there any honest politicians left.’ Haha!

I got the business done, albeit with so much more chin hair than I had when I entered the bank and decided to visit the Charity Shops in Sherwood on Mansfield Road. Plenty for me to choose from. In search of a DVD of the film called The Negotiator.

None of the establishments had a copy of the film in stock. The first shop I called in, had some small mugs on sale, and I got one I liked that looked less drippable than the others. I spotted a watch with a tatty strap, and a chipped and rusty casing. The reason I bought it was two-fold. First, it was laid out to be read quickly, with numbers, not marks. Secondly, it was only £2!

I went to the gentleman at the counter and asked him to unlock the display case and show me the watch, which the obnoxious-git did, reluctantly and forcing himself to talk to me through gritted teeth. He then told me the mugs were four for so much, I can give a donation to make up the money! I gave the ignorant animal a fiver and walked out while he was saying something to me, that I had no interest in listening to. Such a rude gentleman he was. But I didn’t bear any grudges, for all I know he might have had a death in his family, was feeling poorly or just hated Bald hearing-aid-wearing, bespectacled old men? I hope he feels better soon.

My first wristwatch for 55 years! 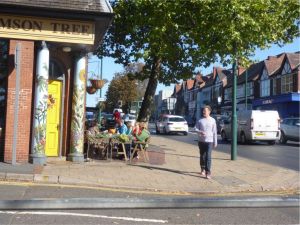 I plodded up the road to the Sue Ryder Charity Shop and had a look around. They had a Red Dwarf series One DVD that I bought.

Then up to pelican lights and crossed over the road and into the Oxfam Charity shop. Nothing in there.

Down to the Mind Charity shop and bought a

Naked Gun trilogy DVD. Why, I don’t know, cause I can’t stay awake to watch the DVDs or the TV. Klutz!

Up the hill towards the bus stop, passing the area where the dog-fight altercation took place yesterday. All was quiet, and the street beggar and his mobile phones and woof-woof were not

In fact, there was nobody about at all!

Got to the bus stop and was joined by Doreen and another resident.

We had a good natter before catching the L9 up and back to the flats.

As we got to Chestnut Way, I was impressed with the driver’s skills in getting the vehicle through to the bus stop, by the parked up delivery lorries blocking access.

I’m not apportioning any blame anywhere here folks. Just admiring how the driver coped with the obstructions.

The sun was still strong, and it was lovely and warm. This can’t last, I feel sure!

We alighted the bus, and I exchanged a few words with the residents getting on the bus.

I stopped to take this panorama shot of the complex. It’s coming on now.

I hobbled along and caught up with Doreen and a bloke tenant, and we had a chinwag as we made our way up in the lift.

The sudden daily weariness arrived as I was doing the Health Checks and medicine taking.

Even I find it hard to believe how quickly I fell asleep in the £300 second-hand now working again, recliner.

I woke up later and did the last Health Checks then pt the Red Dwarf DVD on. Managing to watch two episodes before nodding off again!

4 thoughts on “Inchcock Today – Thur 27th Sept 2018: Not a bad day, despite the Fauxpas & Whoopsiedangleplops. Hehe!”