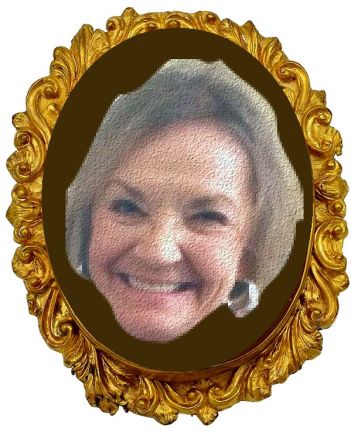 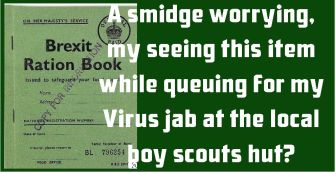 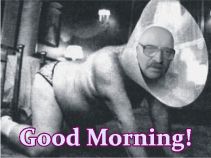 00:45hrs: I was re-envigorated, (speaking loosely), back to life, with vague bits of flotsam and jetsam milling about in the brain, about the dream I’d been having. It was not enough to remember exactly what happened, but I knew I was underground, in caves possibly, and being pursued by an angry mob. That’s all, really… Oh, and I was young and fit!

A few moments later, getting my monolithic-sized stomached body free of the £300, second-hand, decrepit, c1968, rickety recliner, the need for the Porcelain Throne became apparent. And it grew more urgent by the second! My swaying, butt-gripping wobble to the wet room, (I could have qualified for entry into the Ministry of Funny Walks competition) with the addition of Balance-Loss-Leslie, must have been one of the most hilarious to look at, I’ve ever done.

The jammies and PPs were almost torn off in my haste, I landed on the plastic raised bog contraption with such a bang, and I was off-target a smidge. Harold’s Haemorrhoids paid the price! The evacuation started straight away, and it flowed, for a long time, but without any interruptions, or pain! Damned messy though, and heavy bleeding too, (I assume from the poor old piles taking a battering as I plonked my bum down?) A good bit of cleaning up had to be done again. No doubt about it, Trotsky Terence is making a comeback and won the DESB (Daily-Evacuation-Stakes-Battle) for supremacy, over Constipation Konrad.

As I turned from the washbasin after medicating and cleaning, the adventitious right leg Neuropathic Schuhplattler dance kicked-off, with a short but brutal flailing performance. Neuropathic Pete has been overdoing the dancing over the last few days. But this time, he caused me no injuries, I was lucky enough to be in the middle of the wet room, used the sink to hold onto, and I was too far away from anything lethal to knock into or against. Also, the attack only lasted about 30 seconds, so no falling over involved either. I could not help it.

Feeling a little perkier with my having a spot of good fortune, I got the Health Checks done, the terrible ‘Hum’ became louder, a lot louder suddenly? Humph! You can’t win ’em all! 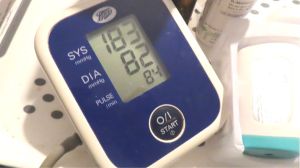 The sphygmomanometer, made in China for Boot’s, knocked back mt Smug-Mode a bit, the SYS was right up to 183, and that was just after the evacuation involuntary right leg neuropathic dancing bout. But the pulse was still lower and fine. 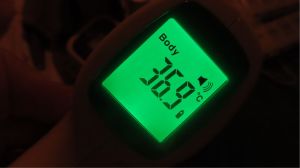 My Hong Kong manufactured Harpin Xian Di contactless thermometer reading, was fine again, at 36.9°c, and in the green. The urge for a brew of Glengettie was yielded to this morning, as the Terence Toothache, didn’t feel so tender. (I am a Fool!) 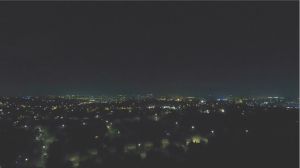 I got the kettle on, opened the light & view-blocking, hard to get at to clean, new kitchen window, to take a photo of the view. The Nikon camera was not working again, so I had to use the Canon, which is not very good at taking night pictures at all. I doctored this photo on 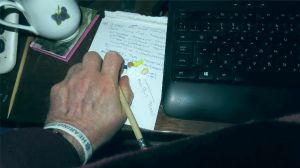 CorelDraw, to make it a little lighter.

Back to the front room and got the computer on, the tea was cool enough now, so I took the medications with it, then got down to sorting the updating of yesterdays blog. I remembered to put the nurses visit who phoned and woke me last night to inform me, she’d be calling Monday, onto the Google calendar. Got the photos uploaded from the SD card, then worked on the updating. I got it done and posted it off. Emailed the link, then Pinterested some snaps, and went on the WP Reader.

A wee-wee, then I passed some involuntary wind and wound up on CorelDraw, to create a few thought graphics for the IT. I got three done, then it was time to get the ablutions done, so I will have time to get Josie’s meal done.

Things got ridden with Confusional Conrad while I was taking the shave and shower. All memories from here have moments of lucidity, and blank periods, only a few scribbled notes to work from, in the morning? 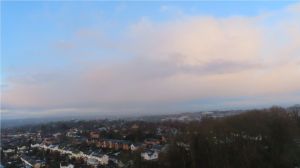 The ablutions were a complete blank.

The waste bags were gone, so I assume I made some up and added them, to those in the box and took them to the chute. 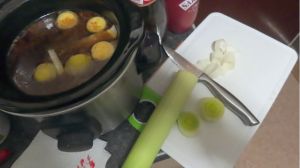 Jane rang, rang back. Cooking Josie’s and made meals at the same time, for Josie and me.

Dropped a saucepan, and also I think my dinner bowl. I woke later in the recliner, with a sharp pain in my right hip, so I may have 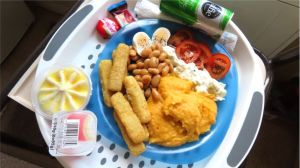 gone over at some stage.

Delivered Josie’s nosh, found photo’s I could not remember taking.

I felt more confused, but I just plodded on, I think. I recall getting some Iceland minced 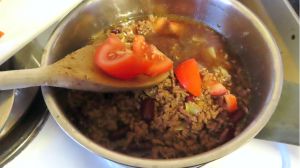 beef, the fatty so-called less than 5% fat packet I started last week and froze it.

Dizzy Dennis attacked regularly, and the weariness forced me to get my head down earlier than ever before. 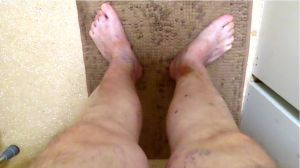 Found this picture from the ablutioning.

Fell asleep in the chair, woke with the right Hippy Hilda in agony, and was not sure if the door chimes went or not in my sleepy haze. I investigated and found a bag from Jenny with pickled eggs and minced beef outside the door. Bless her.

I drifted into having no idea what I was doing at this stage. I was sure I’d forgotten something. 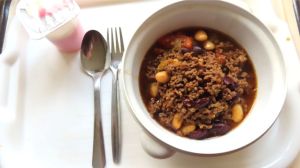 Shattered and discombobulated as I was, I could not get back to sleep for hours, and could not think clearly, which helped me cope with the sudden sanity-testing, over-active Thought-Storms.

I seem to recall that the minced beef Chilli con carne was fatty. Thank heavens Jenny has got me some better sort for the next CCC. Thanks, Jenny, I’ll get the money down to you after the nurses have been today (Monday). So kind of you.

Not sure if I’ve missed anything out, one of my worstest periods of blank incertitudes for a long time.