07:00hrs: I woke again, in the depths of the uncomfortable, c1968, second-hand, none-working rickety recliner. Although, I woke several times before during the night and just drifted off again when I realised just how tired I still felt.

As the faint memories of yesterday’s blanks and Dizzy Dennis’s attacks came forth in my mind, I appreciated the fact that at least, ‘I Had Woken up’ a bit more than usual. Hehe!

Blanks still lingered on in the grey-cells, of Thursday’s thunderation’s and functionlessness of thoughts. Odd incidents I could recall clearly, but why? No idea! I lay there a while, pondering and trying to recollect the frustrating events of the vigil. I think, although I was awake for much of it, I’d had a good six hours of Sweet Morpheus.

Then the regular ‘Waking-up events’ started. I had to escape the recliner with some haste, to get to the EOGPB (Emergency-Overnight-Grey-Plastic-Bucket) in time. I fumbled my way out of the none-working, cringingly beige-coloured chair, caught my balance, and gently took a few steps to the receptacle, and released an LDSSM (Long-Dribbling-Spraying-Splashing-Marathon), that needed some patience from me, as the Diabetes Insipidus (Post Micturition Dribble) went on for ages! Followed by the requirement for a visit to the Porcelain Throne!

So, I took the bucket with me for cleaning and sanitising, and hobbled to the wet room. Both sides of the pin-cushion stomach were still artistic looking. (Tate Gallery, you’d better hurry if you want to display these!)

The evacuation was the easiest one for ages. Bit of bleeding, but not pongy or messy, and easy to clean and sanitise after completion. Smug-Mode-Adopted!

I should have known not to get anything like contented or smug! I walked into the door frame, leaving the wet room. Ashamedly, I swore out loudish and released an irresistible blood-letting muffled howl. Grobbledamitt!

How come I keep doing this, and always on the right side? A kasheh, that was! Tsk! Obviously, my ailments, Peripheral Neuropathy, Dizzy Dennis, Nicodemus’ dying neurotransmitters and Shoulder-Shuddering-Shirley, and maybe Diabetic Doris, have to accept some guilt, along with the Ischaemic stroke?

A little massaging of the elbow, and I calmed down again.

Then as I got in the door to the kitchenette, I took this photo of the late morning view! This is the latest I have got up in years!

I got the kettle on, and tool th 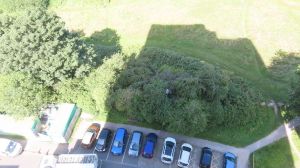 is picture, blind of course, of Chestnut Way, below. I caught the shadow of the block of flats as the sun came up[ from behind. Despite the new light & view-blocking, rain-letting-in, new windows, that prevents one from photographicalisationing below, and see what you are taking a shot of, due to the bonkers wide sticking out new ledge.

I think they were designed by a member of the PHI (Photographer Hating International). Possibly the SSG (Senicide-Supporters-Group)? That’s possibly why they have built the windows so old, disabled men can’t see if the fire brigade or police are on site, without using the step ladder to reach out to take the photo or even see down. Thus a tumble off of the rungs, stubbing of toes, chin scraping, and or elbow bashing occurs. Still, if it makes them happy! Cracklepackers! Lost the plot there, sorry. 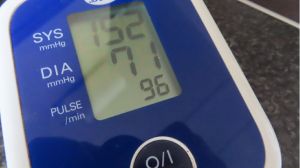 Got the Health Checks sorted out. The BP SYS was better today, though. Pulse was a smidge high? The thermometer gave a reading of  82°f. Low, methinks.

I made the mug of Morrison’s Extra Strong Assam. And got on the computer. Well, I didn’t stand on it, like, just turned it on. Hahaha!

After getting advice from my Cyber-Buddy, Tim Price, I decided to get a Kodak AZ651 Bridge camera from Amazon.

I also ordered a bag for it, and some nail clippers (not for the toes, that would be impossible for me to do). The bag looks like it is a multi-fit one, I’ve used these before, not very well-fitting. Not that I can use it then anyway, it’s arriving with the toenail cutters on Saturday 18th. The

camera will not be coming until between the 24th and 28th of July. Ah, we’ll!

At least the camera looks a little chunkier. This doesn’t mean I will not drop it or knock it over, of course, but it should help a bit. Getting used to the new operating system may bug me.

I then remembered to get the mushrooms in the crockpot. I added some fish vinegar and light Soy sauce. Not that it makes much difference to the fungi. I put it on auto, so it should bring it to the boil then go on a low setting.

When I could not sleep at all last night, I did the post up after midnight, so don’t have that to worry about doing this morning.

I set about doing this blog so far, first. But, I’m afraid it was a wee-wee interrupted and riddled session! The look-up time I spent on Googling, led me to believe that the problem I have is possibly Functional Incontinence, which is when due to other ailments and disabilities, I just cannot get to the WC or receptacle in time. Also, it may be that the newly acquired Diabetes insipidus – Post-Micturition Dribble (PMD) – after-dribble. Either way, I’m leaking when I shouldn’t, having trouble stopping it, and keep stubbing my toes in a rush to get there on time! Just thought I’d mention it, like. Sorry! But eleven wee-wees in two hours is a bit much! Not that much escaped. That’s another possible reason I’ve just thought of. When they lasered my cancer from the bladder, it left me with a smaller holding pouch. Hehe!

This reminded me, I’m sure I had an appointment for tests in the City Hospital’s Urodynamic Laboratory, that was until the Coronovavirus arrived, and it was cancelled?  As soon as I’m allowed, I must get out to see the Doctor… dentist, paediatrician, (No that’s not right) Podiatrist, to get my toenails cut, opticians… I’m straying off all over the place this morning. Sorry, again.

I then made up a template for the upcoming two days worth of blogs, on CorelDraw and WordPress. This simple-sounding fact took me over three hours! Mainly due to my ailment that’s known as Shuddering -Shoulder-Shirley!

Thought about what to have with the mushrooms, and decided on some battered fish and garden peas.I’m feeling such a lot better than yesterday.

I got some graphics done on CorelDraw.

Well, can you believe it!

Turned off, got the nosh sorted, a fair-sized plateful. I couldn’t eat it all. (Eyes bigger than the belly?) But I enjoyed what I did consume. The fish in batter was tasty, the mushrooms from Iceland I’m going to stop having, the potato slices needed ten-minute of picking out the black-spotted ones before cooking. Overall Taste-Rating; 7/10.

I did the washing up, then got the evening medications taken, but I forgot about the Phorpain gelling for the knees (A mistake that, as I found out when I woke up all stiff and struggling to move, Haha!)

The amazingly persistent Thought-Storms began as soon as I settled into the c1968 recliner, in hopes of Sweet Morpheus. No logic, or reasoning to them this time, fears, concerns, depressions, jealousies, and guilt, with unwanted emotional manipulations! Meant another late night before I nodded off.