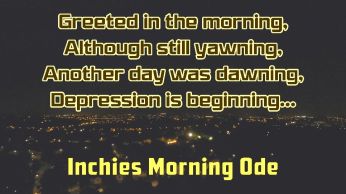 03:30hrs: Woke, wriggled out of the rickety recliner, with some haste. Caught my balance, got Metal Mickey, off to the wet-room, and the Porcelain Throne was utilised; with a difference today. The heavy-duty evacuation came out a light-green, the pain was excruciating, and the deep-red blood flowed so much, this doesn’t bode well at all. However, the most significant change in style was the tinkling (wee-weeing), started off before the big stuff, and lasted none-stop for a full couple of minutes after? And yet, there was no PMAD Post-Micturition After Dribble whatsoever? Trouble brewing here, methinks! 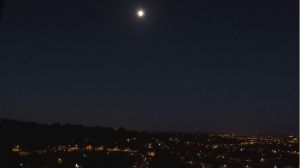 Washed and medicated things, and off to the kitchenette, and put the kettle on.

I took a picture of the morning view, capturing the distant moon, still clinging on high in the sky.

I used the stick thermometer to take my temperature. The photo I took of the result did not come out very good, as you can see where I added the figures, a 34.4°c reading. Which was fair enough for me, it’s a smidge higher than of late, but needed, methinks.

The sphygmomanometerisationing offered another high SYS reading for me. The Dia and Pulse seemed okay, though.

Then it was back to the wet room, for another wee-wee. A long one again, not powerful mind, more a persistent weak trickle, and once more, no PMAD to follow. I decided I would be commonsensible to prepare the OGPEB (Overnight-Grey-Plastic-Emergency-Bucket) and bring out for use during the day, the leaking seemed as if it is going to continue, I thought. I disinfected the bucket, and left it close to the computer chair, just in case. (And, a good job too for it was more than much-used over the day. Tsk!) I took the medications and made a brew of Glengettie tea.

To Computer Cameron, and proceeded to get myself in a right pickle with things! My concentration was all over the place. SSS (Shuddering-Shoulder-Shirley) was on and off bashing away at me suddenly for short periods. And, as for NN (Nicodemus’s Neurotransmitters), well, they were also on and off so often, it was damned hard work getting anything done.

I seemed to be spending more time correcting mistakes than typing! I was jumping from graphicalising, checking things on the web, forgetting where I was or what I was doing after each of the many wee-wees, and updating the Saturday post, became a grind, more than the usual pleasure!

Then, bloody Grammarly kept changing the word-checker to USA English and needed to be changed back every time. Which meant exiting the blog, into the Settings and changing from the UK English, which it is set on, to Australian English, then back to UK English, and reset, every occasion when it went wonky on me!

However, through my resilience, determination, grittiness, and resolution, I got the updating finished! Well, alright, I stumbled on, in stupidity, blind-faith, making numerous mistakes and errors, correcting and cursing silently away, in between the wee-weeing, and somehow, miraculously got the job completed. I felt mentally drained, and my will-power and confidence were destroyed. Globknacklebangles!

Posted off to WordPress, went on the WP Reader section, Replied and commented of messages and comment, did some Facebooking (Another long job today), Pinterested some snaps, and went to make a brew. (I think you can take it that wee-wee’s were being taken throughout the morning)

I got some potatoes in the slow-cooker, on a low setting.

Made a brew of Thompsons Punjana tea. And, very tasty it was too! Using the Sainsbury’s Full Cream Jersey cows milk!

I got out the last of the fresh garden peas and started podding away. I added a drop of the fish vinegar to the pans water.

I can report that Herbert above is in good form and not poorly. The Knock-knocking, scrape-scrape, and tap-tapping, was proof of this.

The nubilous sky looked so wonderful. I did a bit of nephelococcygia-ing. But my mind in the state it is in, I lost the figures and shapes I’d identified, but found others. You can see the moon still lingering in the second picture, that surprised me!

I made a start on this blog at long last (In between wee-wees!). After several hours of slow, mistake-ridden work, I returned to the kitchen to make another brew, this time Glengettie Gold. The cloud formations had changed now. But they looked just as pretty as ever, to me.

I saw the Kodak camera and thought I’d try again to find out how, or if there was a way for me to get it on charging. I used the shorter USB connection, from the camera to the computer-port, and connected it. But I didn’t know if it was working, because the camera has no lights showing on it?

After a while, I pulled out the lead and took my first picture with the new camera. If I am to use this Kodak, first I have to find out if it is charging or not (Not sure how to do this?) Then, discover how to change the picture size to like on the Nikon and Canon, to a broader type shape. But the instructions are just too small to read, even with the glasses and using the magnifying glass! Not that might matter, cause the camera might melt in a bit, then I’ll know this is not how to use the USB connection.

I wanted, like the other two cameras, to use a direct line to the socket for charging. I expected it to be useless. They had sent an American two-pin, fit-it-together-first plug in the box. But it does not fit our English sockets. I just don’t know if it is safe or working at all?

On the screen, the power (I think) bar just show up as plain grey? I toyed with it and got nowhere, then the head and eye dizzy came on. So, I’ll just leave it, hopefully charging for a while, and keep an eye on it for sparks, flashes, or fire bursting out. I keep touching it with the left hand for any signs of increased heat, none yet, so it might not be doing anything other than damaging the computer. I’m not in a good nor contented mood at the moment! Humph! I’m worried, frustrated, and confused, yes!

The sunshine has receded now, and the drizzle commencing.

I took a picture of the view of the scene, though the balcony, with the Canon camera. The Nikon is in charge. It’s got a flashing green light now. I’m going to look on the web to see if I can find what that means, back in a bit.

Aha, the light turns off when it is fully charged. Good!

Now I’ll try to find out about the Kodak Pixpro AZ 675. Back in a bit…

Well, I’ve found the light that should be lit when charging, but it’s not. So I took out the lead from the Nikon charger, and put that in the Kodak, and the light lit up?

I’ll leave it in and hope for the best, and keep checking the camera for heat, I hope it works safely.

No time left for farting around, I have to try and work out how to change things on the Kodak for the picture sizes and shapes at a later date. I have to get some graphics done for the IT page tops, I’ve none left ready to use now. Took the cameras off of charging. With my EQ telling me there’s no need to rush?

So, on to CorelDrawing. Too tired to continue – got nosh sorted, A decent nosh, rated at 7/10.

Took the evening medications and creamed certain areas in need if the same. Furuncles, Harold’s Haemorrhoids and the newly arrived whatever it is, under the armpit, a deep maroon lump, not a bruise, though?

Sleep? Ha! I couldn’t believe that my being so drained and tired, Sweet Morpheus denied me for hours! Hey-Ho!