00:15hrs: I rose resiliently resisting Roger Reflux’s rumblings, and regained my balance, and rambled to the bucket for a wee-wee. Another weak, restricted affair.

I was in a decent frame of mind for once, and many of the ailments had not yet woken-up along with me. Roger Reflux had. (The others will catch-up soon I expect!)

Got the kettle on 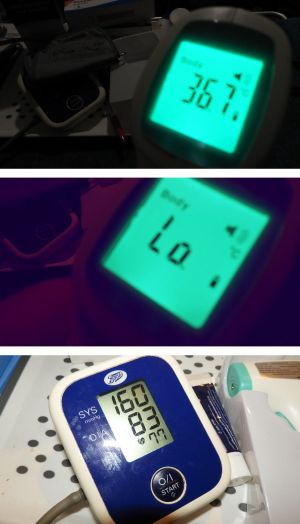 . Then got the Harpin Xian Di Thermometer, and took my temperature, as you do with thermometers, I’ve noticed this. The reading was a fine 36.7°c and in the green.

As I was putting down the machine after picturing it, as Nicolas’s Neurotransmitters lost touch with the brain, and I nearly dropped the thermometer. Luckily my working left hand caught the Xian Di, but I pressed against the thermometer button, and got another screen come up, telling me the temp was low, but showing green! Huh? I was a smidge puzzled, maybe I’d hit the button several times and scrolled through somehow? Beats me. Nicodemus was back behaving himself today. The SYS was a little high again, but the pulse was well down on yesterdays 99, at 77. 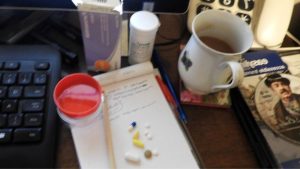 Off to the kitchen and got the kettle on, and made a Glengettie Gold brew this time.

Decided to get the medications taken, back in the computer room. I wasn’t too sure of the innards intentions, but some mild turbulence from the stomach meant I did not take the Docusate Sodium medicine, but I took a Dioctyl® 100mg Poo-Softener instead. I feared that the liquid might be too strong, and create an opening for Trotsky 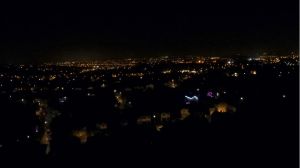 Terence to take over at the Porcelain Throne session. Did you see that? I was thinking in a semi-logical fashion then? I almost went into a Smug-Mode – Grade 3!

I took a photo of the morning view.

Then, I got on with the updating of the Monday blog. And it went so well! Many pluses noted. The ailments were all much more manageable than they usually are. Oh, Yes! Even when the workers kicked off drilling, it didn’t bother me – for I have never been less hassled by the ailments for many months. Although this was worrying in a way? I was determined to make the most of the respite, mind you, Anne Gyna was starting to kick-off, you can’t win ’em all, Hehehe! I really was in a semi-upbeat mood! I got the updating done and finished. Posted it off to WordPress. Pinterested some snaps. Went on the comments, then the WordPress reader. It was as if I was a different person!  I could not resist making an ode, to display my contentment with the proceedings, and sod Anne Gyna, who was getting worse. 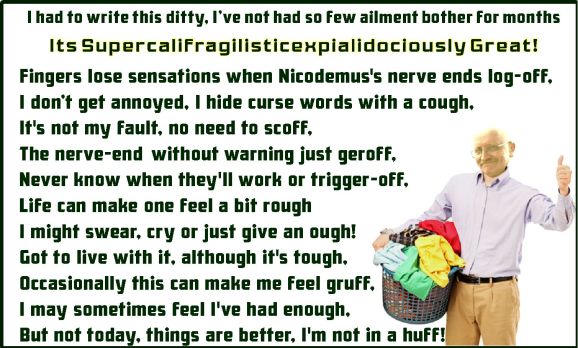 I then did some Facebooking, and for some reason, there were many more comments to reply to. Which I got stuck into, with particular relish. I spent hours on it, but was content and happy to do so! This really is a rare thing, me being like this, but still, I intend to make the most of it! Yee-Haa!

Messages came up from the ‘Cloud’, which baffled me a bit, I usually would have ignored them and hoped it wasn’t anything important. But not today, in my high spirits…

A shame, though, cause I seem to have made a right mess of things. The MS Picture thingy keeps not working now. I’ve got everything changed to working in Inches as well. And the reader drive has stopped working altogether. Was I bothered? Nope! (Later on, it got to me, mind!)

Ah, the calling to the Porcelain Throne arrived. Just as the drilling and knocking from above started again. Off to the wet room, still almost unconcerned. This is concerning me a smidge! It’s unnatural for me not to be worried, frightened and or fearful!

It was another different mode of evacuation again. No question, a victory (although another painful for me, one), for Trotsky Terence over Constipation Konrad, a 2-1 win I’d say, in the DESB (Daily-Evacuation-Stakes-Battle)  Messy in the extreme, with the added surprise, that after I started cleaning things. A second, nearly as big dollop messy followed through! By Jiminy, I was almost caught out, there! Cor-Blimey! The cleaning up took me ages, and with the extra hours spent on Facebooking, my semi-confident mood was getting less so all the time. Now, the tap-tapping, knocking and drilling was beginning to get to me!

I now had to force myself, to get some waste bags made up and put in the box on the walker-guide. Then some brekkers seemed a good idea, but I ended up with just two bags of Frazzles, three last lemon biscuits, and some nuts with a mug of Glegettie tea. But I still tried to stay chirpy, but it was harder to do so now, I’m afraid. Even if it dies altogether, it was great fun. No complaints!

I got a can of Chilli-Con-Carne and put it in the saucepan with a tin of peas, made and added some gravy, and mild chilli powder to it. I turned on the oven, warming to do the part-baked rolls later.

I washed the mug, and put some handwashing in the bowl, and it was time to get the ablutions tackled. At least I can have a full showering one this time. 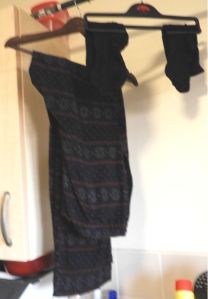 I was still in a better than average mood, though, maybe not for long. Hehe!

I went through to the kitchen and got the short bamboo socks, and a pair of jammy bottoms I left soaking, washed, all done wrung and hung.

This was when it dawned on me, I’d just washed the clean ones! And now, I only had the thins crap cotton ones left that were dry to wear tonight! Granglesbognessbuggerit!

I spend some hours on the updating of this blog, with the errors and mistakes creeping back into my work. Things were slowly returning to normal. Which was not nice, but still I appreciated the temporary period of respite, earlier in the day. 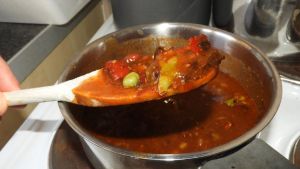 Then an even bigger cock-up! I’d burnt the chilli and peas at the bottom of the pan. Still, it might give it a little extra flavour! I wonder how many days the saucepan will need in soak afterwards?

I got the bread in the oven and set the timer. Which was of no use, because I forgot to take it with me to the computer, to finish off the but I was doing on this blog. Closed down Computer Cameron, and returned to salvage the Chilli.

The slightly overcooked bread and the burnt Chill-Con-Carne turned out to be one of the tastiest I’ve ever made! I gave this one a flavour rating of 8.5/10! The oven-baked baguette and rolls came out spot-on! The gravy added, and amount of mild chilli powder worked a treat too! At last, a successful, Chilli nosh fitting for my tastes was made! (Although trying to repeat it, will need finely-tuned burning, singing and overcooking that may be challenging to get right again. Haha!)

The pot washing took a lot of soaking, scraping and effort, but with the taste still lingering in my mouth and tastebuds being savoured, this was not a problem.

I settled, mentally worn out, in the £300, second-hand, c1968, cringingly-beige-coloured, not-working, rickety, incommodious, grotty recliner, earlier than usual. And pondered over the mixed fortunes of the day… those I could remember.

No Thought Storms! I stayed awake for an entire episode of Law & Order (Cunningly taking the wee-wees during the commercial breaks, which the bladder permitted me to do?)

I took the belated evening medications, ensuring that I added the Dioctyl® capsule, and ignored the Docusate medicine.

I resettled in the recliner and readied myself to enjoy a Devils Kitchen episode. No, I take that back, it was a Ramsay one, Kitchen Nightmare, not that it mattered what it was called, for at the first batch of adverts, sweet Morpheous arrived, and I had peace and bliss for four solid, uninterrupted hours! Heavenly!