0230hrs: Stirred into life, mind and body seemed to be in some sort of cohesion for a change. I reckon I managed five-hours sleep; although dream-filled. Not that I can recall anything about them, but I know they made me wake-up feeling nervous about something or other. Tsk! The laundry room duties came to mind, and I decided to get this done first thing.

0240hrs: Out of the £300 second-hand recliner, almost with ease. ( Okay, I thought, what’s going on with all the ailments? Reflux Roger, Hippy Hilda, Duodenal Donald, Harry Hernia, Shaking Shaun, even Dizzy Dennis were notable for their absence?) Only Inchies Fungal Lesion, Trotsky Terence and Haemorrhoid Harold were giving any bother. Very rare and worrying! Hehe! Had a wee-wee.

Down the lift to the laundry room. Nipped out of the foyer doors to take this photographicalisation of the morning view. It was not cold at all out their. And in the laundry room, it was positively warm, and no machines were running either. Got the washer filled and back to the flat. 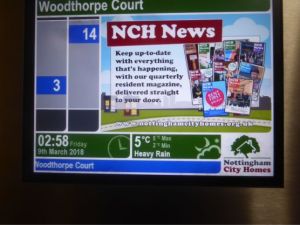 The electronic information board informed me that it was 02:58hrs, 5°c with Heavy Rain.

Up to the apartment, had a wee-wee.

Into the kitchen with the intentions of getting the Health Checks done.

But had to nip back for another wee-wee. (Hello, the third leak of the morning. What’s going on here?)

I’m not sure how or why I did this, but I took two readings on the Sphygmomanometer. One after the other? Seem to be losing-it early today.

Time to go down to move the laundry to the drier. I noticed the poster still in the lift, and reminded myself that I was going to look up the word (On the blue logo) Secondelement the other day and forgot to. What odds of me remembering later.

Back up to the apartment. Took a selfie, (Not a pretty sight, I know) Took a photo of the poster in this lift. More to get confused over?

Inside 72 and had a wee-wee. (Oh dearie me!) Went to make a fresh brew. It was incredibly warm in there. Temperature reading at 60°f. IT has not been this warm in there for ages. Well, I fib there, don’t I? When I left the oven on for the whole of the other night, it was slightly warm. Tsk! Getting older with dignity is impossible! Haha!

To the Porcelain Throne. The oddest session indeed. Little Inchies fungal lesion had been bleeding drying and bleeding again. But this seems to be the pattern recently. I hope the appointment with the chap at the GUM clinic arrives soon. The evacuation was worrying, Trotsky Terence was still in attendance, and Harolds Haemorrhoids were very tender, bleeding and messy.

Then got the computer on to start this diary off. Ten minutes later, I was back on the Throne! Repeat performance, but it took me a long while to stop the lesion bleeding. So long that by the time I’d finished and cleaned up again, it was collection time for the laundry. Down once again. 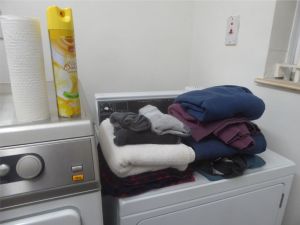 I opened the drawer to choose one of the six or so toothbrushes we keep there for cleaning the filter out, and there was only the one? Enough to do the job I know. But what happened to the others?

Clothes out and folded, filter, drum and casing cleaned.

Then back up and had a wee-wee.

Got the togs stored away and refilled the washing pots ready for the next laundry room visit.

Then, I took a photograph from the kitchen window to the left, just because I liked the

view. For once, the colouring came out exactly like it looked.

As I was taking it, I spotted the lights of a plane passing on its way presumably to the East Midlands Airport.

I zoomed in to take it. 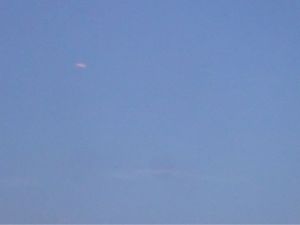 It didn’t come out anything like the eye view. But it did remind me of the claims from the UFO 50s and 60s claimants.

Being the amateur artigrapher that I am, I got back to updating this diary and got a far as here, by 0635hrs. Long job! Then went to finalise the Thursday post.

0740hrs: Got the Thursday Diary finished and posted off.

Looked at the Emails to see if I’d had anything about the blood test or next appointment from the Doctors surgery yet. Nothing!

Checked and replied to comments on WordPress. It didn’t take long.

On to the WordPress Reader page, next.

Herbert above is very continuously noisy this morning. The first time I’ve let it bother me. Then again, maybe he has the workers in doing something?

All the heaters bar the one in the kitchen stopped working, and it got a bit colder in the flat. An hour or so later, they came back on. Very puzzling?

The door chimes rang out, and two ambulance ladies let themselves in. Looking for a tenant ladies whose name I didn’t know. We had a little chinwag, and I sent them to the Obergruppenfurheresses Hut to ask there. 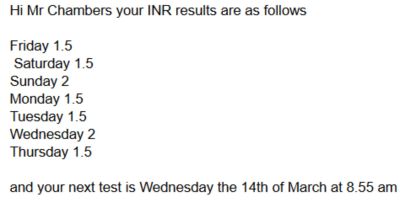 I rechecked the Emails and found one from the Sherrington Park Medical Centre.

They had moved me to a Wednesday, which was much appreciated.

I went to book it on the calendar and found it clashed with the Dentist appointment! Humph!

Found the DVT results had been delivered. The reading very high at 4.9 now.

Less possibility of a heart Attack or Blood Clot, but I have to take care, cause any bleeding might be excessive. Fantastic news that, what with the Haemorrhoids and Inchies Fungal Lesion both bleeding all the time. Hey-ho! More protection pants needed! Tsk!

I got the ablutions done, Health Checks and set off to the Obergruppenfurheress Wardens Temporary Shed, to see if either of them was in, and to ask them if they could call the Dentist for me to move my appointment for me.

When I got outside, I took this photo from below Woodthorpe Court.

I could hear the workers drilling and knocking-away high above.

The sky looked beautiful, and it was not too cold either.

But then, I did have the new extra warm coat on and my hat and gloves. A little further down Chestnut Walk, I took a picture of the progress on the new build flats. The site seemed so busy this morning. Crews were working on all three buildings and looked so busy. A bit of light drizzle coming down on and off.

I arrived at the shed and entered. Kath was busy at a table on her computer. Three tenants were sat around. I offered them all a cheery ‘Good Morning’. Asking Kath, if any of the Wardens were about. She said no, they had just gone out on their morning visiting rounds.

I explained about the clash with the dentist and the INR blood test. She kindly offered to ring them for me, to change the appointment. Bless her cotton-socks! She’d soon got it arranged for me, and wrote it in my paper diary for me. We had a chinwag, and as other residents arrived, the gossiping-circle was widened and enjoyed by me.

Farewells offered, and I left to return to the flats.

Approached the foyer of Woodthorpe Court, I snapped this builders machine as it backed out of the end compound.

I got a right-rum look from the driver.

Up and to the apartment, and took a wee-wee.

I updated the Google calendar with the written diaries new info. 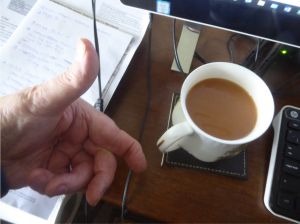 Got the oven on, warming up ready for the ready-made Cumberland pie with its extra cheese, and the potato-cakes with their sliced tomatoes to be put in later.

Made a good mug of Assam tea, Put the comestibles in the oven and set about updating this post.

Crampy Craig kicked-off, and I stopped, turned off the computer and went for a wee-wee.

Got the potato cakes and Cumberland pie from the oven, onto the tray and added a lemon mousse and a sliced apple.

At last, a tasty meal I ate all of and really did enjoy! These Morrisons Cumberland Pies, I can recommend to anyone who likes lamb. I’dd added extra cheese on top, mind.

Gobbled it all up slowly, savouring each forkful. The feeling was slightly spoilt by the noises from the flat above. The drilling and banging from outside had stopped, as the workmen and ladies had packed up for the week now.

Once again, the TV programmes on offer had plenty that I would have liked to watch. Of course, I kept nodding off. The Hustle episodes were on too late for me to stand the slightest chance of my staying awake. Tsk, always moaning me! Hehe!