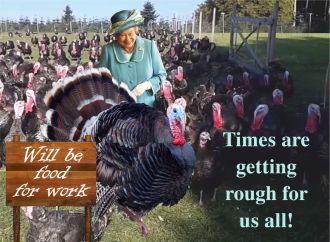 0545hrs: As my reluctant expergefaction began, the uhtceare ridden brain joined it in feeling depressed. The aching body tormented by Duodenal Donald and amalgamated to greet the morning in a cowed, fretfull, apprehensive mode. I seemed to be worrying about everything.

The need for a wee-wee forced me into extracting my weary, tired body from the £300 second-hand recliner and off to the wet room. A good job I changed the PPs last night, they coped well with the copious amount of blood from Little Inchies Lesion. This reminded me to visit the surgery today and get a date for the GUM clinic from the doctors, or better still, go there on Tuesday to see them first.

I did the health checks and made a brew to take the medications with. Sys down yet again, the pulse continues to do its ‘Up, down, flying around’ thing. Hehe!

I took an extra Omeprazole capsule and a good few swigs of the impotent antacid medicine. I’m sure the worry and hassle over the noise from the flat above every weekend and sometimes during the week, and my being forced to complain about it, has caused the ulcer to flay up like it is doing. I hate conflict, and it worries me.

With my not getting to sleep for hours and hours, and waking up feeling so tired, it was now nearly 0700hrs, soon I must get the ablutions done. How I will find time to do the WordPressing and blogging might prove difficult today.

I had a quick go on the WordPress Reader. Then got some draft diaries done in advance. Made a list of things to do today, and put it in my pocket.

Time for the ablutions now. I enjoyed this session, barely any medicating needed apart from the Germaloiding. Hehe! Duodenal Donald kept on at me, so much so, I took an extra few swigs of the impotent, weak antacid medicine and a Ramipril capsule.

Got the black bags sorted and taken to the rubbish chute.

Off out to the shed, where I met Obergruppenfurher Julie, who was aware it seemed, of my complaining about the Saturday noise above. She asked me why I don’t just go up and see him. This was not what I expected to hear. I informed her I had visited the flat before but got no answer. Perhaps he is a popular tenant with them? I proudly showed off my list of things to do!

Cyndy and some other of my favourite tenant gals arrived, and we had a great chinwag about this, that and a lot more. I wish I could remember the names of more people. The place filled up, Welsh William, Frank and others. William was looking and sounding so much better now he is getting over his Morphine addiction. When the bus arrived, I sat behind Cyndy and Doris (I think that’s her name, a lovely woman).

I got off the bus and began what turned out to be a delightful mini-hobble around town. 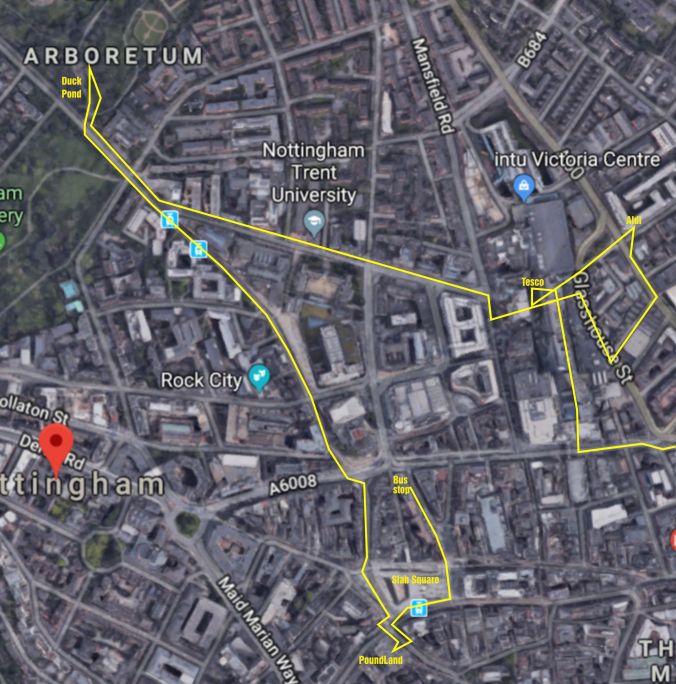 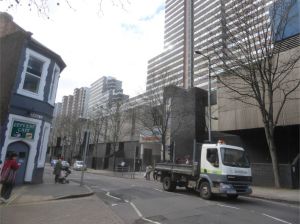 Called in Tesco in the Victoria Shopping Centre (Mall), and was lucky enough to find some cooked Pork Knuckles on sale, and bought three of them.

However, I could not find the list of things to do anywhere. I emptied all the pockets and searched the bag, without any luck? What a Putz!

Then out and across to the Aldi Store for an amble around. I got some caramel nibbles that the ladies at the Social Hour have taken a fancy to. Some crispy bacon, lemon yoghourts and some flatbreads I have never seen before. They are called Flat buns. (There is a photo further below of them) Almost orange in colour, I had to try these, especially as I now had the Pork Knuckle and tomatoes to make some sandwiches for tonight’s nosh. Oh, and some potato cakes. 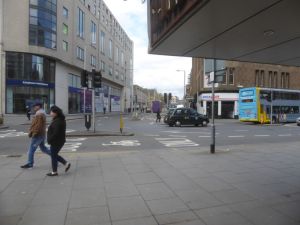 The bag a bit heavier now, but I was feeling okay, and wanted to make my way to the Nottingham Arboretum Duck Pond.

Out of the Aldi store, through Vic Centre and out facing Shakespeare Street, where I hobbled to the end of, passing the hundreds of young, fit students, very few without a phone or a coffee in their hands and up Goldsmith Street to the Arboretum. 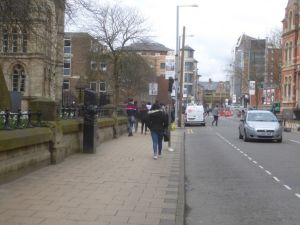 The mixture of ancient and brand new building was not pleasing to my eyes.

I hobbled up and in through the Arboretum gates, well, I say gates, there was only one narrow small gate open.

If a wheelchaired person needed access, I don’t think they would have gotten through it. 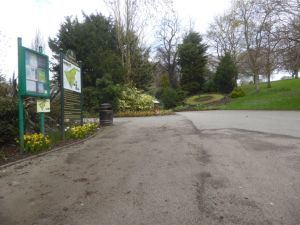 I had a reminiscing moment or two when I got inside.

Back came the girls, the bandstand, the ice-cream sellers, my youth. I had to stop my wandering mind. Hehehe!

Along to the duck pond. The surprising thing was, there were very few ducks, just a handful of Mallards mixed in with the pigeon army. Here are the photographs I took at the pond. 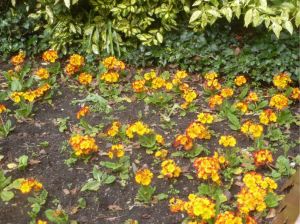 On my way out of the place, these beautiful little flowers caught my eye. I don’t think I’ve ever seen any like these before, beautiful!

On my way up Goldsmith Street, a group of four or five students, on their phones yet still giggling and laughing with each other, coming in the opposite direction, forced into the road as they 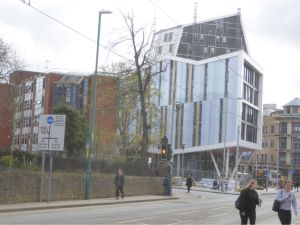 carried not. Possibly not even aware of what they had done. Hey-ho! No harm was done!

The grotesque new college building was now open and functioning. What an eyesore!

I wonder how much the demented architect got for designing this monstrosity? 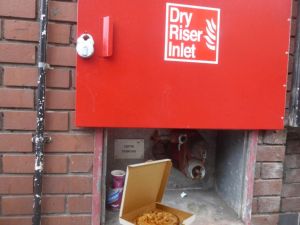 Near the top of the street, I came across some Nottingham Street Art inside the wall of the closed down office block. It seems that the local pizza place is not as popular as it might be? Haha! 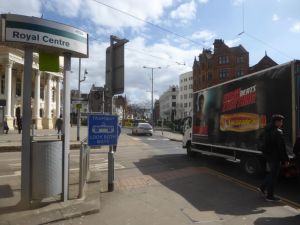 Crossing Upper Parliament street near the Royal Centre and Theatre Royal, I crossed over and went down Market Street, with its many abandoned retail businesses and the odd few new specialist high-class shops, all customerless when I hobbled by them.

Down to the Slab Square, the sun was out, no 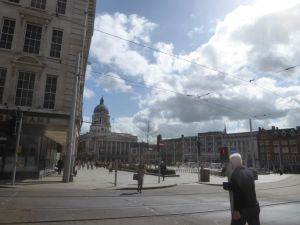 signs of wind or rain, the sky looking a picture and a decent count of generally depressed looking Nottinghamians milling around.

Passing the Starbuck and Costa coffee houses, with their clients all on computers or telephones inside. The coffee cups with the stagnating coffee and the froth, running down the sides of the plastic pots onto the tables and tops and congealing. At the Starbucks anyway, I had a good look in there. Hehe!

I called in the Poundland store on Wheeler Gate and had a wander around. I bought some yoghourt covered peanuts and a packet of Sunflower Hearts to restock the now empty duck-food pot to use next visit. 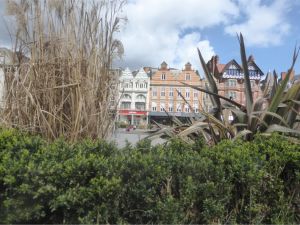 Paid and went on the slab square.

On the South Parade side, I got close up to some plants and took a photographicalisation through them across to Long Row opposite. Now here, the buildings displayed some of the most elegant architecture ever designed anywhere. Done so by my favourite designer of all time, of course, Fothergill Watson. 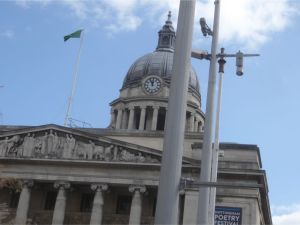 I was pleased with how this effort came out.

A quick look at the Little John clock revealed it was time for me to get to the bus stop to catch an L9 back to the apartments.

So, off up Queen Street to the shelter.

The bus was a little late, but this has become the norm for the 1205hrs one. The driver is coming from the depot to relieve the regular one so she or he can get a dinner-break.

The bus arrived, I was the only person to get on. 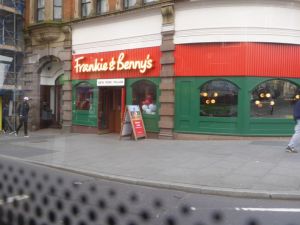 I took a snap of the newly decorated facia of the Frankie and Bennie’s Diner as we passed by. I hope they do better at night for clients because I rarely see anyone in it when I pass by. Possibly another future victim of the Nottingham Business Failures League?

I’d have thought that their breakfast offer of ‘Bacon & Eggs’, consisting of two rashers of bacon, two eggs and toast on offer at only £5.95, would have had folks rushing in. Hehehe! £6!

The lovely Doris (?), got on at the first stop, and we had a jolly good laugh and nattering session all the way back home. I enjoyed that. 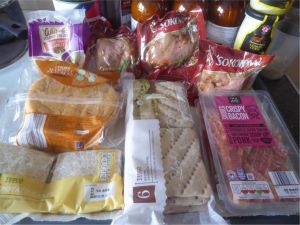 We parted in the lift, and back in the apartment, I got the purchases stored away. The new to me Flat buns are on the left.

The sudden exhaustion overcame me, and I had to leave the updating of this post until the morning. I was fatigued in the extreme.

All I could do was get the Health Checks and medications sorted, and sit down with the worries, fretting and fears combining to stop an sleep coming for ages. 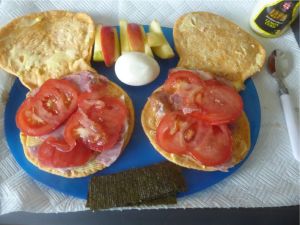 The new Flat-Cobs were delightful. I buttered them and sliced some pork knuckle and tomatoes. Added a side of a sliced apple, pickled egg and seaweed sheets. A jar of the superb lemon yoghourt to follow.

I might have nearly nodded off eating this meal, but it was a smashing change for a meal. Rated this as a 9.3/10 effort.

I lay there waiting for sleep to overtake me, but it wasn’t interested, despite my thinking I was tired and drained?

Eventually, I managed to nod-off.

Suddenly temporarily rejuvenate, I shot awake ten minutes later. With the sensation that something was wrong, or I had forgotten something? Horrible when this 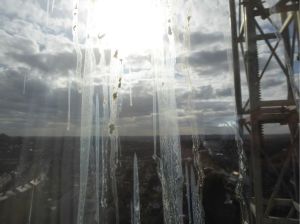 I had to get up have a look around to check if anything had woke me up. I checked that no alarms were activating, nothing had fallen over, cooker okay, taps off, etc.

I noticed the bird poo on the balcony window looked well set on the glass now.

It took me ages to get back to kip. But this time I stayed asleep, straight for five hours! Ahh!