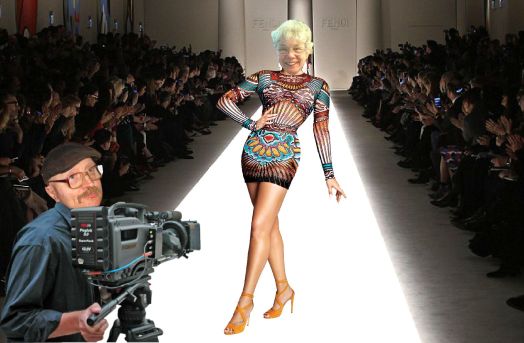 03:55hrs: I came back into mock-life-status, the mind in a pickle of confusion, and as the eyesight engaged, I spotted several signs of Nocturnal Nibbling. Guilty-Mode-Engaged! The two pots of temptation, I’m pretty sure I made up last night during the Dizzy Memory lapse period, and both had been nibbled at! I’ve no control at all, sometimes you know! Tsk!

I thought for some reason that it was Monday this morning. I started to make plans for getting the ablutions done early for the Morrison delivery… then it dawned on me, it was actually Sunday. (I’m quick yer know, Hehehe!)

As I was removing my copiously generous, flobby-stomach bodied form from the clutches of the c1968 recliner, a wee-wee was needed. Not that I can remember doing it, but I found I had placed a crossword book on the mantlepiece, no doubt in expectancy of the Post-Micturition, but likely in anticipation of more for the After-Dribbling, summat to help me kill time and keep amused while waiting for trickling-tinkling to stop?

But my impromptu plans had not accounted for holding the bucket with the good hand, wee-weeing without anything to guide the possible spray, and not leaving anything to utilise the crossword book and use the pen! Never-mind!

It was (as I anticipated), another long dribble-ridden exercise. I left the bucket out. Then hobbled to get a wash and freshen-up. After which, the belated need for the Porcelain Throne usage arrived, after I’d taken some shots of the morning light-show on view, including an artistically, but violent and unwanted Shaking-Shoulder-Shirley inspired one (Hehe!), as I was putting the kettle on.

A near-disaster that was, my not moving straight away! Talk about ‘just-in-time!’ That could have been another embarrassment if I’d been 10-seconds later in getting down on the seat! Phew! As they have been for months, it was painful, but things went mess-free, and the bleeding was hardly worth mentioning! Smug-Mode-

Made the brew of Glengettie, then I got the Health checks done. The sphygmomanometer was showing SYS at 173! Well-high that was. I’ll mention to the nurse in the morning, that is if it a communicable one, there ain’t all wanting to gossip and natter with their old-geriatrics. I took the medications and put the medical stuff back in the drawer.

Then got the milk out of the fridge for the tea. Criggleblogglesworthisms! The milk had gone off! Threw the tea away, washed the mug, and searched for some long-life individual pots I had left. Found them, and had a sniff of one, they seemed and smelt alright. Made a brew of Morrison’s Extra-Strong Assam, and all was well again, the tea was flowing! Haha! I rinsed and dished the milk carton.

Which reminded me, I’ve got a massive bag and a small one of recycling material, three small black bags of for the waste chute, and all four bins need sorting! I must find time to get the small stuff to the chute. The recycling bags I can take down on a Monday, in hopes that a caretaker might help me with them. (Pathetic, innit?)

Off to get the ablutions done, or else I’ll be struggling to get Josie’s nosh done on time. I nipped into the kitchen to make sure I had everything needed for the cooking for Josie later on. Gawd it was eerily dark, with sunshine glaring outside. Hehe! And I’d not got the mixed beans opened yet. So I opened them. 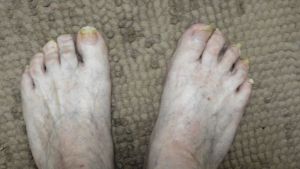 Stripping off to make a start by getting the teeth done, and I stubbed two toes against the seat raisers metal leg. One of the overgrown toenails bent backwards and stayed there! I believe I may have said something along the lines of ‘Oh, bother!’

The session didn’t go as well as yesterdays, but I had lots of worse ones. But that doesn’t ease the pain at that moment! Hahaha!

e dropsies were only about four, and the knock-overs was remarkably only one!

The shaving produced only one tiny nick on the neck! No shower-head bother, either! Best of all, nothing walked into!

All very pleasing at the time! Self-Satisfied-Scenario succoured and secured! 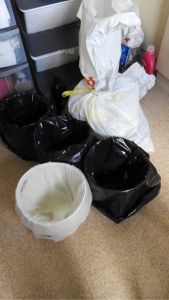 I remembered when I got to the kitchen to take the midday medications. I often miss them, but they are only painkillers, so it shouldn’t create anything nasty, apart from pain, of course. Hehe!

I got the waste bins all emptied and bagged up the rubbish. Cleaned them and got new bags in.

Then got Josie’s haddock and fish strips in the oven. The pots were nearly ready to be turned into extra-strong Leicester cheesy mash, with cabbage, onions and chives added.

I got the three-wheeler overloaded with the rubbish bags. Obviously not the giant white recycling one, as I explained earlier.

It happened again! Crangle-shock-knuckers! The second toe-stubbing of the day, on the same toes, making it worse this time! I can confirm that the wheels on the three-wheeled walking guide, are still as solid, and rigid as hell!

Crying seemed like an option at the time! But I resisted it, just! Hahaha! 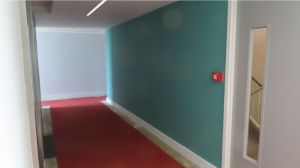 I fumbled and bumbled my way out of the door and through the lobby hallway of the three flats. And into the being updated for over three-years lift lobby. A lot more painting had been done. Shame about the lights not working, but you can’t have everything.

To the end, turned left and into the waste chute room. Deposited the seven bags in the small opening, and without trapping any fingers! No Dizzy Dennis botherations, Shuddering-Shoulder-Shirley, Anne Gyna, Nicodemus’s Neurotransmitter failure, or waking into anything! This felt unnatural, peculiar, abnormal! 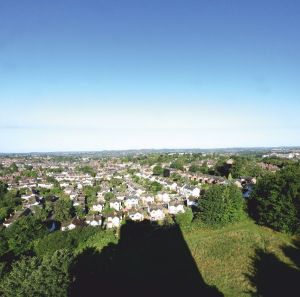 Back to the apartment, checked on the cooking progress, all looking fine, to me.

I’d took two photos earlier, and bound them together to get this shot on the right-hand side.

It shows that it was taken earlier on, cause the sun has cast a shadow of the flats as it rose from behind them.

What a clear sky, its got beautiful clouds in it now. Like a painting almost. The sun has done a runner, though. 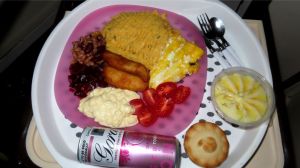 I set to preparing the meal for Josie, and keeping my eye on the clock.

Extra treats this week. Some egg-mayonnaise, two lots of fish, smoked haddock and battered basa. Along with the different cheesy potatoes, a Limoncello dessert. Hope she likes it.

I delivered the meal on the wheeled server to Josie’s door, pressing her bells at precisely 12:00hrs! I think she liked the look of it. Back to the flat, and caught a glimpse of the computer-bedroom as I went tot he kitchen, oh, dearie me, it did look all untidy. Tsk!

I got the pots washed, making a mess as I did so, thanks again to Shuddering-Shoulder-Shirley’s antics. It took me as long as washing the pots did in the first place, to clean up the mess I’d made on the floor! Still, there hadn’t been any Whoopsies for a why, so, fair enough!

Updating the blogs and graphicalising for a few hours, in between wee-weeing. Haha! 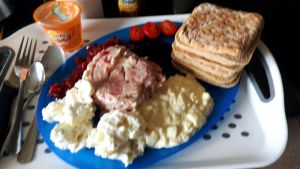 I got my dinner made up, a cold one. Apart from the grilled cheese sarnies, no cooking was needed. Which might have been a good thing, cause I was beginning to get the shakes from Shirley and Shaun. Last of the egg and potato mayonnaise used up, some delightfully tasty Polish pork hock. The last of the mixed beans and also tomatoes, and a few cheese toasted bread thins. I didn’t eat it all, I’d made too much again.

But, I did enjoy it, despite my dropping food all the time, mainly due to Shoulder-Shuddering-Shirley, she was wearing me out!

I had a scout around and collected the bits of fodder dropped while eating, and went to get the washing done. But felt so drained, I just put everything in the bowl to soak. I returned to the recliner, and got the TV on, started to watch a football match, Manchester United v Chelsea cup match, and soon nodded off into the much-needed land of Nod! Bliss!

I was woken up a couple or three hours later. It was Josie, who had again forgotten about my going to sleep early, and despite my repeated begging her not to call after 15:00hrs, was returning the plate (18:00hrs), tray, cutlery from her meal. I had to get up and put a dressing gown on to cover my horrendously plump wobbly-bellied nudity, and answered the door. Stubbed my damned toe en route to the door! But, being as I am also a forgetful person as well, I mustn’t complain, and I do understand. Hahaha! We spoke a while, I think.

Of course, any chance of my getting back to sleep had been destroyed by the interruption. Then Dizzy Dennis kicked off. Life was not good at that moment!

I gave up on the sleeping stakes, there was not a chance in hell of getting any. As I lay there, stewing in my frustrations, with the Neurotransmitters on and off, and the odd shoulder shaking spell, I decided to give up, I knew Sweet Morpheus was not about to come. 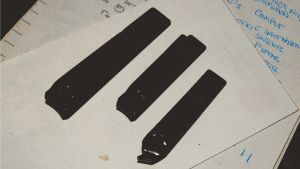 So, I decided not to mope about and got the new nail cutters out of the drawer. I realised I would not be safe to try using them in my current state of shakes, and just took them out and tried each one. They were of poor quality. The smaller straight-cut one’s handle stuck the first time I tried it! Hey-ho!

Unbelievably, (I think) I fell asleep after taking this photo of them! Waking up later, to find the three clippers on different parts of my body, well, two of them, the other was on the recliner. My fingernails were partly-clipped, oner bleeding, and an empty cheese Quaver bag, was tucked between my legs?